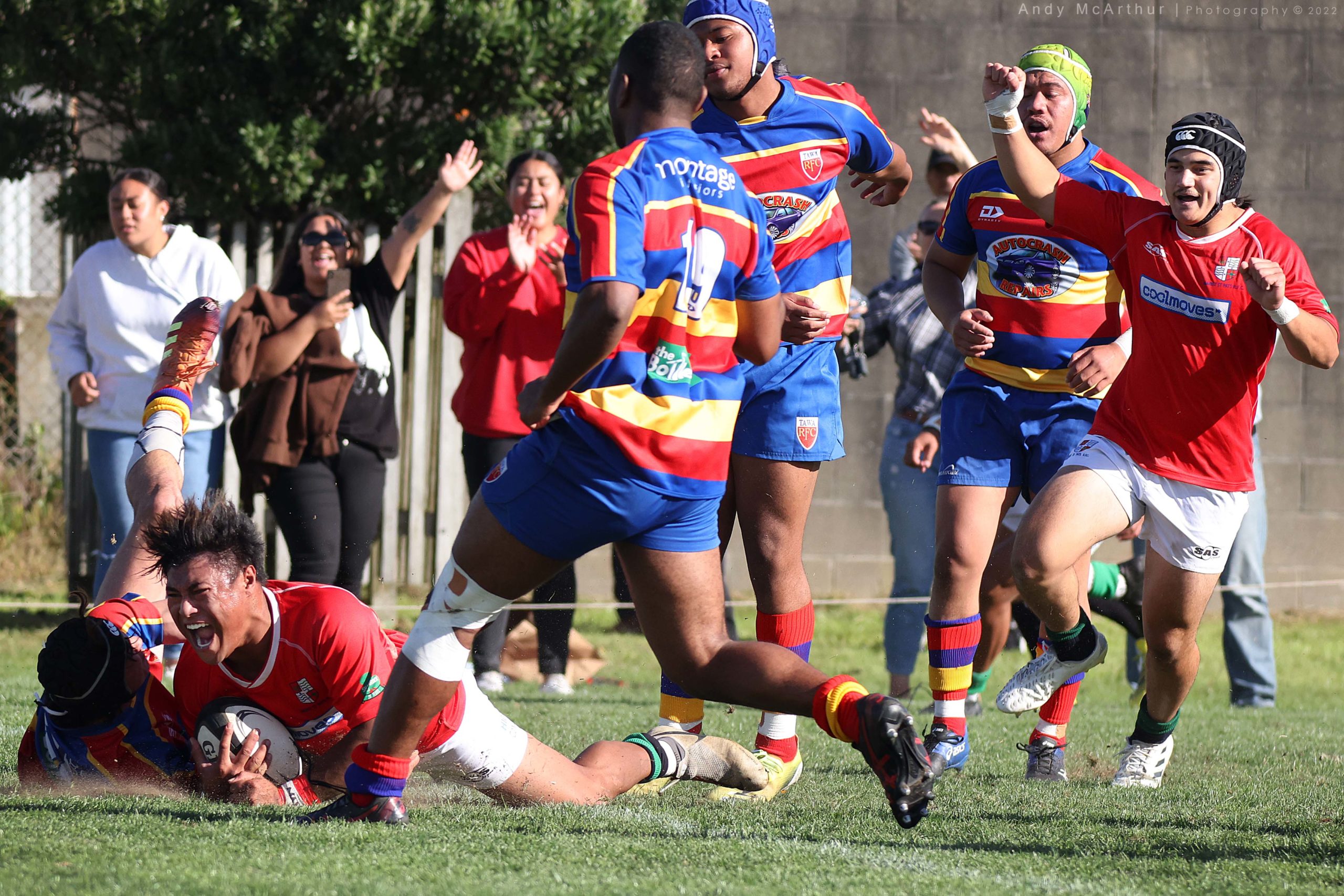 Saturday evening edition: Defending first round champions Old Boys University and last year’s second round Jubilee Cup winners Tawa were both beaten in the opening round of Wellington club rugby Swindale Shield matches played in balmy conditions around the region this afternoon.

Old Boys University met a 10-19 defeat to Petone at neutral Hataitai Park, while down on the flat at Evans Bay Park, Marist St Pat’s reversed last July’s 29-point final loss to Tawa to prevail 24-21 and take first round honours over them.

At Haitaitai Park, first half tries to flyhalf Richard Evans and second five Riley Higgins put Petone up 14-0, before a Callum Harkin penalty and try to new captain Kyle Preston saw OBU cut the deficit to 14-10 at halftime. The sole second half scoring that won the match saw Higgins break up the middle before finding his Hurricanes U20 teammate and No. 8 Peter Lakai in support to score the winner with about 25 minutes to play and take home the Marc Verhoeven Memorial Trophy.

At Evans Bay, MSP and Tawa fought out a thriller to set supporters’ pulses racing, with MSP crossing for the match-winning try in rather more dramatic circumstances with time almost up on the clock.

Replacement halfback Ken Kapeli burst through Tawa’s defence from an attacking scrum to score the winning try and second five James Proctor added the extras to seal what could prove to be a vital victory in the coming weeks.

Both sides had kicked penalties after Tawa had taken the lead for the first time on 55 minutes, but Tawa were unable to repeat their heroics of the final at the Hutt Rec last year.

Across the road at Kilbirnie Park, home team Poneke held off Wainuiomata 17-12, after doing all their scoring in the first half through tries to blindside flanker DJ Taoipu and fullback Nick Robertson. Poneke protected their 17-0 lead at the oranges to win the Hakaraia Trophy with a strong second half defensive effort.

For Wainuiomata, their two tries in the 47th and 63rd minutes were scored by blindside flanker Xavier Smith and right wing Niko Patelesio.

Johnsonville beat the Wellington Axemen 28-15 at Helston Park and Paremata-Plimmerton held off the Avalon Wolves 43-18 at Hammerhead Stadium.

In a competitive first half, Johnsonville went into halftime leading 7-3, before pulling clear against the Axemen who were playing their first match together after a disjointed pre-season campaign.

There were fewer errors by both teams after halftime and Johnsonville sprung clear by dominating much of the play and scoring two long-range tries, to seal their Mick Kenny Memorial Cup match. Try scorers for the Hawks were left wing Knox Tuinasu (2) and midfielders Olly Paotonu and Aukuso Tuitama. Wellington scored two late tries and showed resolve to the end.

Pare-Plim came back from 18-15 down at halftime to put on a strong second half display against Avalon, scoring all the points in the second 40 minutes.

Tries early in the second half to halfback Jake Tibbits and lock Taisson Lealaisalanoa saw them race ahead 29-18. More followed and they raced clear. Fullback Blake Neve (2) and right wing Esi Komaisavai and hooker Fuli Kupa were the other try scorers.

Pare-Plims forwards were hard-working throughout, with Hurricanes tighthead prop Pasilio Tasi, who started his Wellington club rugby career with a barnstorming 40 metre run that led to the first try, having a strong game.

This was their first win in 20 matches in the Swindale Shield, and almost the same score as Avalon’s win over them in this corresponding match last year (43-17).

At Maidstone Park, Oriental-Rongotai battled hard for their 29-20 first-up win over the Upper Hutt Rams, who were guilty of making too many handling errors throughout the contest.

Ories led 15-8 at halftime and kept their noses in front throughout to win the Bob Lendrum Cup.

At Jerry Collins Stadium, the HOBM Eagles took down Northern United 25-10 in a scrappy first round encounter that never reached any great heights.

The Eagles will be grateful to come away from Porirua Park and start their 2022 campaign with a win, while Norths will have plenty of work to do to get up to speed.

The match was punctuated by numerous errors by both sides, which Eagles capitalised on Norths errors and lapses in concentration rather through their own constructive play. All three of the Eagles’ tries followed Norths’ turnovers and two were started from deep and one from their own line.

The Eagles led 18-3 at half time, playing with a deceptive breeze in their favour, scoring tries to left wing Fereti Soloa and snappy fullback Zane Ainslie.

The first try by Soloa came after a quick tap penalty that caught Norths’ defences napping, as Norths centre Losi Filipo was cooling his heels in the sinbin following a slapdown in trying to stop a prior breakout. Ainslie’s try was in effect a 14 point try, after Norths had lost possession while hot on attack thanks to a try-saving turnover at a ruck on his own line by HOBM  flanker Jordan Gillies and his side then went 100 metres to score. The Eagles went close to scoring again just before half time but opted for a penalty instead.

Norths had started the first half strongly and posted the game’s first points with a penalty to halfback Luke Kapene. They started the second half in similar vein, pressing hard to score next, but a dropped ball and turnover from 70 metres out in a long build-up resulted in the visitors’ second five Francis Tanuvasa scoring what became the match winner.

Norths got back into the game but their own errors on attack and lineout woes halted any chance of a comeback. Instead, HOBM went close to scoring another long-range try up the grandstand touchline and it was all Norths could do to prevent this. Norths  scored what was a consolation try in the corner with a few minutes to play to make the final score 25-10.

There was just one Premier Women’s match contested today, with Marist St Pat’s hosting Northern United in the early match at Evans Bay Park in round one of the Rebecca Liua’ana Trophy.

MSP won 41-10 – pulling away to win the second half after leading 10-0 at the close of a hard-fought first half.

The other three matches were called off on Friday, owing to Covid. It is hoped that they will be replayed in the coming weeks.

There were also some pre-season lower grade encounters around the region. One early match at North Park saw the Petone Colts take a comfortable win over the St Pat’s Town First XV.

The lower grade competitions get underway later this month.