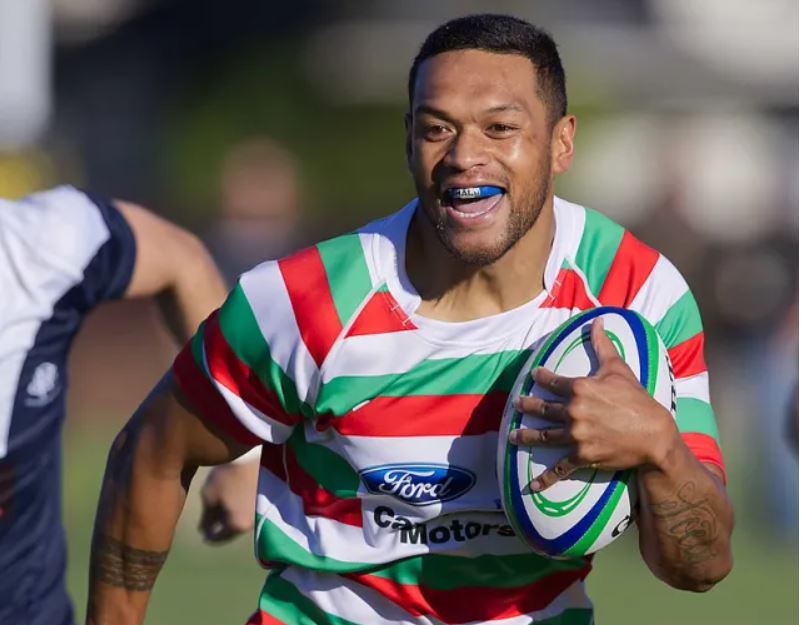 “It was awesome to get an opportunity to make my Super Rugby debut. It was a dream I was never going to give up on,” Hutt Old Boys Marist and Wellington outside back Tomasi Alosio told the Huddy Hui on Wednesday night.

Whilst Alosio didn’t play in the team’s historic win against the Hurricanes last weekend, he was on the field when Hawke’s Bay’s Danny Toala scored the golden point winning try that gave Moana Pasifika their first win in Super Rugby, in just their third ever match of the competition.

“I was sideline with the ball boys and just seeing the guys never giving up and having that self-belief was inspiring to see.

“We were well-beaten by the Chiefs in the previous match, but we had a really good review and training week building up to the Hurricanes match. We came out with the right attitude and the boys defended their hearts out and protected our village.

“It was that inspiration and self-belief that was evident in the latest match against the Blues. We had 13 debutants, we had guys get the call to play at the last minute. On Monday night a couple of boys had to come in because of Covid.”

The Blues won 32-19, but it was another super-competitive performance.

“We kept it as simple as we could and just expressed ourselves and just had fun out there.”

Alosio explained how he received the opportunity to play for Moana Pasifika.

“After last year’s international test window I got a phone call from Aza [Aaron Mauger] who invited me to join the squad. I was surprised, it was unexpected, but I was stoked and 100 percent all in.”

He was in the Manu Samoa last year that played well, with a new coaching group.

“He gave everyone a shot, whether they were coming from club rugby, NPC or Super Rugby at the time. He only had a small pool of players, because we couldn’t get the UK players over because of Covid. The coaches set high expectations and the boys were driving everything on the field to a high standard.”

Alosio, was one of those players who was selected out of club rugby, the HOBM Eagle starting the international against the Māori All Blacks.

“That was special, and to do so at home in Wellington was even more special. When I was told I would be playing at fullback at the start of the week it was something I really embraced, and I really set about grabbing the opportunity with both hands.”

Alosio said the support of his family has been immense over the past two, difficult years of Covid and being away from home a lot.  “Michaela and my two girls have been right in behind me. Mum and dad and my siblings have always been supportive.”

As well as Alosio, former HOBM Eagle Joe ‘Apikotoa is with the Moana Pasifika team, while another player to standout against the Hurricanes was former Wainuiomata No. 8 Henry Time-Stowers.

Toala’s try won the match for Moana Pasifika, four minutes into extra time. He had gone onto the field as a replacement in the 61st minute. Toala had previously made four appearances for the Hurricanes between 2019 and 2021.

Some more facts and figures from Moana Pasifika’s maiden Super Rugby win against the Hurricanes, by Peter Marriott:

Moana Pasifika is in its first year of Super Rugby and is the 18th different franchise which the Hurricanes have played against.

The Hurricanes played at Mount Smart Stadium for the first time. It is the second location in Auckland at which they have played (after 18 matches at Eden Park) and their 34th different venue overall.

Four players made their Hurricanes debut against Moana Pasifika. Josh Moorby, Aidan Morgan and Teihorangi Walden all started whilst Tom Parsons went on as a substitute.

Moorby became the 36th player to make his debut on the Wing and he is also the 26th player to score a try in his first match for the Hurricanes. With Wes Goosen, he provided the 74th different starting wing combination.

Aidan Morgan became the 22nd player to make his debut at First-five eighth. He, along with TJ Perenara, provided the 57th different Halfback/First five-eighth starting combination in Super Rugby.

Walden became the 29th player to make his debut at Second five-eighth. He had previously played 38 Super Rugby matches for the Highlanders between 2016 and 2020.

The four debutants took the number of players who have made an appearance in a Super Rugby match for the Hurricanes to 282 including 12 so far in 2022.

TJ Perenara made his first appearance for the Hurricanes since playing against the Chiefs at Wellington on 8 August 2020. A total of 594 days had elapsed between appearances.

Scott Scrafton also played his first match of the season, as did Alex Fidow and James O’Reilly. Scrafton started whilst Fidow and O’Reilly both went on as substitutes. Scrafton, alongside Caleb Delany, provided the 62nd different Locking combination to start a match for the Hurricanes.

Fidow scored his second try, his first having been against the Jaguares at Buenos Aires in 2020. He has now made 24 appearances for the Hurricanes, including 23 off the bench.

Jordie Barrett scored a try (his 22nd) and with a conversion took his total in all Super Rugby matches to 540 points. However, with the 11 he kicked against the British & Irish Lions in 2017, he has passed 550 points and now sits on 551 points in 77 matches for the Hurricanes

Below: Henry Time-Stowers: Player of the Match against the Hurricanes.

Have we reached “peak rugby” in schools?