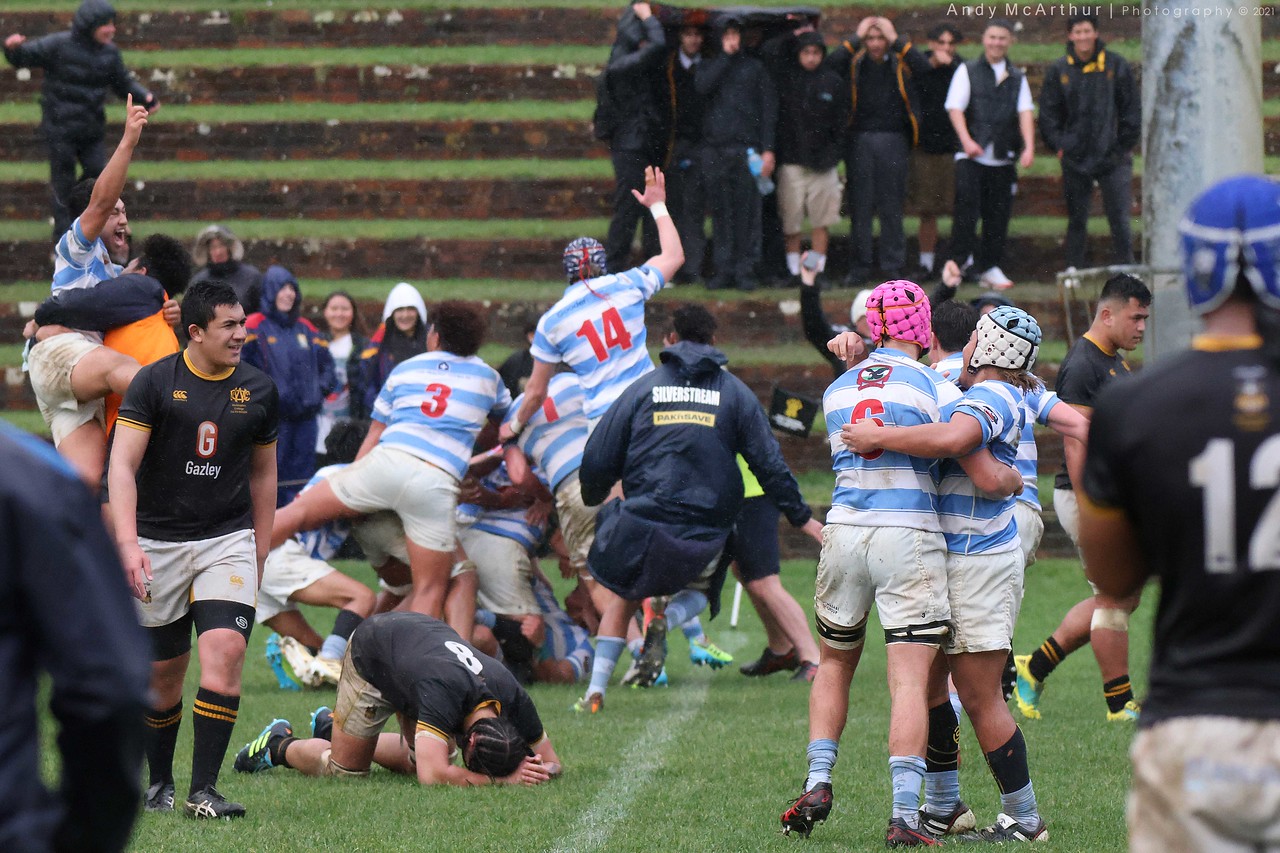 St Pat’s Silverstream celebrate their last-gasp semi-final win over Wellington College last year. They went on to draw 36-36 with Scots College in a shared final. A number of these players are joining the senior club rugby ranks in 2022.

Year in, year out the Wellington club rugby competition produces new talent for fans and supporters to get enthused about. From Joe Karam in the early 1970s to Asafo Aumua a few years ago to the current crop of recent school leavers, people can look back and say ‘I was there’ when they first played senior rugby.

Wellington’s representation in Hurricanes age-group and New Zealand schools’ teams has been on the wane in recent years, with Manawatu and Hawke’s Bay currently providing many of these players. For example, Manawatu have acquired two school leavers from Canterbury this season in first five Isaiah Armstrong-Ravula (St Andrew’s College) and lock Josh Taula (Christchurch Boys’ High School), Hawke’s Bay have home grown talent in players such as Cooper Flanders (Hastings Boys’ High School).

Similarly, players move away to other regions such as Otago for study or elsewhere for work, and this year is no different.

Nevertheless, a number of promising school leavers will be making their debuts in Wellington club rugby over the next several weeks, either in the Colts or Premier Reserve competitions or in the Premier Swindale Shield.

Here are some rookie names to keep an eye on (please note that this is not a definitive list, just some of these players).

The St Pat’s Town prop was picked for the New Zealand Secondary Schools two years running but the national selection didn’t play due to Covid. Lauaki is especially explosive with ball in hand and if he can improve his scrumming and lineout lifting, he will be a serious addition to the competition when he joins his new Tawa teammates in 2022.

Toby Crosby (St Pat’s Silverstream) was sought after by nearly every club, choosing to settle at the Upper Hutt Rams. The No. 8 scored a try from halfway with the opening play of the Premiership final against Scots College and scored a late try in the semi-final against Wellington College which sparked an improbable Silverstream comeback. With his work rate and size ‘Protein’ Crosby has the potential to be a matchwinner, though more nuance at times is an area of improvement.

Poneke bound Maea Tema-Schmidt (Scots College) brings serious height and athleticism to any pack standing two-metres tall and well over 100 kg.  In the Premiership final last year against St Pat’s Silverstream, Scots was 19-0 down and secured a draw. Tema-Schmidt scored two tries and dramatically charged down a late Silverstream conversion attempt from close range. The former Scots captain has joined Poneke in 2022.

Livewire fullback Chicago Doyle joins Hurricane Aidan Morgan in making the move from King’s College to Wellington and to Marist St Pat’s. Chicago actually played with Aidan in the 2019 King’s First XV that made the National Top Four final. He is the son of Casino Doyle, the only man to score three tries in a National Top Four final for Auckland Grammar School against Napier Boys’ High School in 1992.

Chicago Doyle playing in the Top 4 final in 2019. Aidan Morgan in the background.

Had there been a National First XV top four last year there was a strong possibility Sam Howling of Kelston Boys’ High School would have been holding the Barbarians trophy aloft. Kelston were declared 1A champions after winning all 10 matches by an average score of 32-9 and across the entire season 18 consecutive victories were achieved. Sam is a halfback with a snappy pass, aggressive defence and sound ability to read the game. His father Matt Howling was Kelston coach. Howling has arrived at Kilbirnie Park where he will play for Poneke.

Sam Howling playing for the Wellington U20s in their match last month against Manawatu.

Bailee Laurensen-Tupai is a workhorse who played openside flanker for Wellington College in 2021, and joins Petone for his debut senior rugby season. His height makes him a reliable lineout option.

Tofuka Paongo is the brother of Tawa captain Sitiveni Paongo and was in a resurgent Wellington College First XV last year. Rock solid in midfield he allowed the diminutive Stanley Solomon the freedom to express himself and when Tofuka ran he did damage and scored a number of tries.

Their former teammate, 2021 St Pat’s Town hooker Elijah Tia, is joining Oriental-Rongotai this year and has the potential to play Premiers.

Three other Ories players starting off in the Colts side to look out for are front rower Christian Semu, outside back Jordan Tuilaepa and flanker Kristian Barber. Semu and Tuilaepa are out of Rongotai College, while Barber attended St John’s College, Hastings.

Stewart spent three years in the Scots College First XV squad and has a reliable pass and is a more than handy broken field and support player.

Stewart is joined by his Scots teammate and prop Valentine ‘Valley’ Parker, who has played for the Wellington U18s Samoans and Centurions sides.  Both Stewart and Parker were in the Cook Island School 7s team at the World Schools 7s tournament in Auckland.

As always, the OBU Green Colts side draws in several players each season from First XVs around the country who are in Wellington as first year students.

Two such players who could feature at Premier level as well as Colts are TJ Poe Ailoi and Conor Chatfield.

TJ Poe Ailoi is also a prop and was in the Mount Albert Grammar School First XV for three years between 2019-21. The former Auckland U16 and U18 representative is a first year law student. Chatfield is a loose forward/lock and was Westlake Boys’ High School’s First XV captain in 2021. He is also a rower with a big ticker.

Wellington College centre Johnny Maiava will be a welcome addition to the Wellington Axemen this year.

Johnny Maiava dotting down for the Centurions U18s last season, Tofuka Paongo (blue headgear) on his inside.

Kobe-Joe Vulu matured as St Pat’s Silverstream’s captain last year, and is quick on his feet. Likely to play wing or fullback at his new club Hutt Old Boys Marist.  Silverstream openside flanker Sam Morgan is also suiting up for the Eagles this year.

Tiaki Freeman (Rathkeale College) has arrived back at his Junior Club Petone looking to play Colts as a loosie or hooker; but has the ability to step up to play premier footy with an outstanding work rate and work ethic.

A group of ex-Porirua College players have joined the Johnsonville club this year.

The 2022 club rugby Premier season in Wellington is scheduled to kick-off on Saturday 2 April with the opening round of the Swindale Shield. The Colts competition should be underway by Mid-April.

No teams qualified yet after high scoring round of club rugby

Rugby coming up in March and April [updated 10 March]