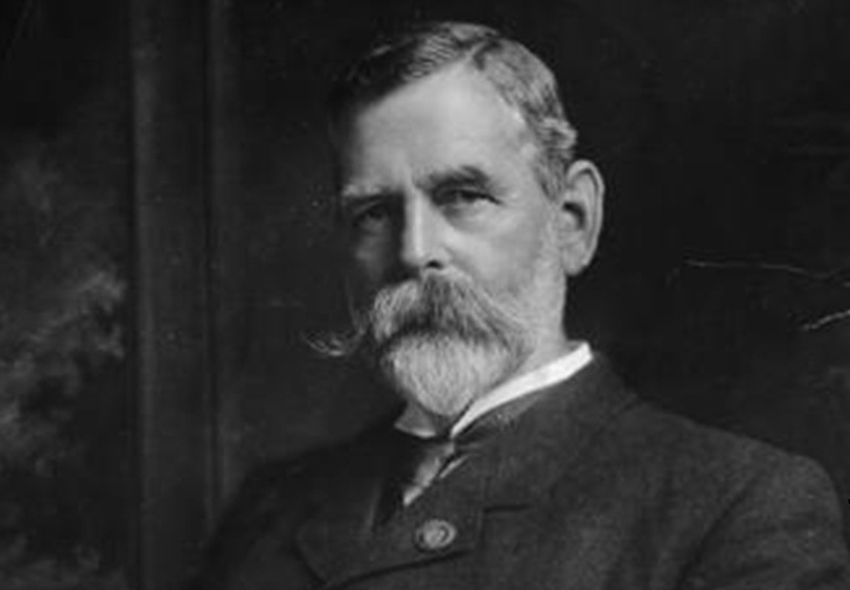 Joseph ‘Pentland’ Firth lived and breathed rugby, and his love and passion for the game was a major reason why rugby had cemented itself as the leading sport in the capital by the turn of the 20th century.

At 6 foot 5 inches tall, Firth was a larger-than-life figure on and off the field. First and foremost, Firth was a school master. He started at Nelson College in 1873 as a pupil. He was appointed Junior Master in 1875 and held that post for six years during which time he captained various college rugby teams. He represented both Nelson and Wellington at rugby.

He was 33 at the time of taking the helm at Wellington College and immediately set about lifting the school’s stocks through sport. In doing so, he initiated a massive clean up of the school’s grounds, turning the bottom field from a rough paddock to a flat field for cricket and rugby.

In his first stint at Wellington College, he sometimes joined his pupils on the field, while he was a regular playing member of the Wellington Football Club’s team and played for the Wellington Provincial team – playing for Wellington against New South Wales in 1882.

If that wasn’t enough, Firth was a pre-eminent rugby administrator of his day. He was a vice-president of the WRFU and then served as the union’s president from 1897-1903.

He was an active coach and mentor and became a leading referee in Wellington.

On occasion this line became blurred, and he perhaps forgot which rugby hat he was wearing. One notable instance in 1878 whilst still a master at Nelson College was when he refereed the Nelson College-Wellington College fixture. Late in the match a Wellington player made a dazzling break only to be stopped dead in his tracks by a thunderous tackle by the referee. Firth apologised profusely and awarded Wellington a penalty. All was forgiven and the game ended in an amicable 3-3 draw.

When he was refereeing a club match between Wellington Athletic and East Christchurch in 1893 he awarded a first for rugby.

Athletic’s wing, King, kicked the ball past East Christchurch’s fullback and followed up to regather and score a likely try. In this moment, the fullback tackled King as he raced for the ball. Referee Firth still awarded the try to Athletic – thus awarding the game’s first penalty try. The following year this new rule was included in the Rugby Football Union’s updated official rules of the game, as proposed by the WRFU on behalf of firth.

At the end of 1897 the Wellington College Old Boys’ Football Club was formed, with Firth as its founder. Firth was an enthusiastic supporter of the club from day one. For 33 years he served as its President and did yeoman service.

WCOB first won the Junior Grade Championship in 1899 and the Senior Championship (forerunner to the Jubilee Cup) in 1927.

As well as rugby, Firth was a gifted cricketer. He played six first-class cricket matches between 1880-86, five for Wellington and one for Nelson. In February 1884 he took 8 for 13 for Wellington against Hawke’s Bay.

Firth retired as Wellington College’s headmaster in 1920 after 28 years at the helm. In the 1922 King’s Birthday Honours, Firth was appointed a Companion of the Order of St Michael and St George, for public services. He died on 13 April 1931, aged 72.

Of note, ‘Pentland’ wasn’t actually an ‘official name’.  It was the name of the ship he (maybe his parents)  came to New Zealand in.  It seems likely that Wellington Colelge pupils found this out and gave him the ‘Pentland’ nickname, which stuck.  Firth liked it so much he started adding ‘P’ to his name as his middle initial. The Headmaster of Wellington College still uses JP’s clipboard for his notes at each assembly.

Previous two stories in this series: