Skip to content
You are here
Home > Club Rugby > Pioneers of rugby in Wellington: 004 Sid Nicholls 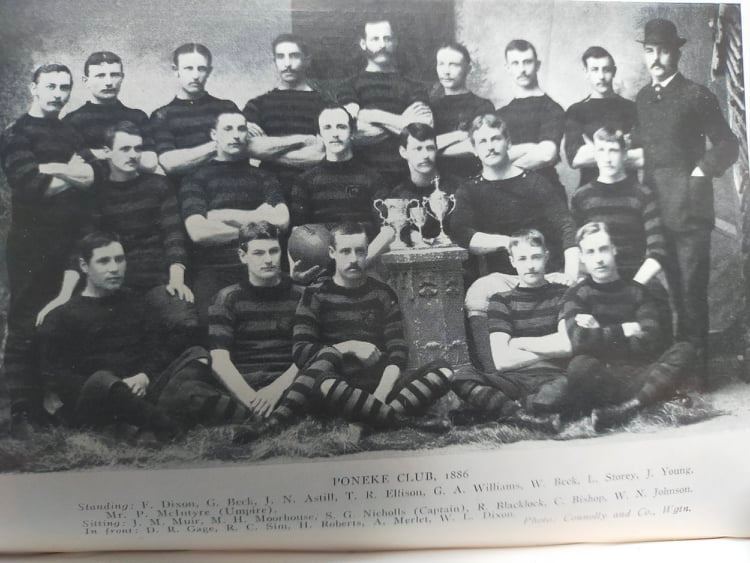 The Poneke team of 1886. Sid Nicholls seated with rugby ball in hand.

Profiling some of the people that built and helped shape the game in Wellington, from its inception in 1870 through to the WRFU’s 50th Jubilee year in 1929.

If you are involved with Poneke and to a lesser extent with Petone it is Sid Nicholls, who is recognised as the founder of Poneke and a leading identity in the local game as it made its first tentative steps towards growth and expansion from the 1880s.

Poneke, who started out as ‘Our Boys’ Club’ in 1882 and then became the Poneke Football Club from 1883 to present, became Wellington’s third rugby football rules club after Wellington (1870) and Athletic (1877).

Nicholls was Poneke’s captain for the first eight years of its existence. Poneke started as a junior club team but graduated to the senior competition and won four consecutive Wellington club rugby championships between 1886-89 and supplied the bulk of the players to the Wellington representative team in this period. In these years they lost just four games out of 36 and in 1888 they didn’t concede a point in 10 matches.

Poneke’s club history, A Willing Band of Youths, said this of Nicholls:

“He had a commitment to Poneke that extended 11 years as Poneke’s delegate to the Wellington Rugby Union while at the same time he carried on with his playing career.

“It was he who gave the club its name. As a member of the Poneke Cricket Club and Our Boys’ Football Club in the early 1880s he was the link that forged the Poneke Football Club into existence in May 1883. He became known as “Daddy” Nicholls in acknowledgement of having fathered and nurtured the club throughout its early development.

“Many of Poneke’s early meetings were held at Sid Nicholls’s home in Nelson Street, Wellington, and often he would volunteer for much of the work done.”

As well as Nicholls’ influence, businessman W.H. Levin was Poneke’s foundation President. He stepped down in 1886 and Dr A.K. Newman, who was a MP and a city councillor at the time, took over and became Poneke’s President for the next 39 years.

Nicholls later moved over to Greytown and then back to Petone where he became involved in that club, both personally and through his three All Black sons.

Petone had been formed two years after Poneke in 1885.

All three of Sid’s sons, Mark, HE ‘Ginger’ and HG ‘Doc’ were Petone All Blacks in the 1920s. Another brother, Guy, was a North Auckland rugby representative; and their sister, Dulcie, won numerous New Zealand tennis titles between 1930 and 1937. Mark’s son, Mark, played rugby for Wellington.