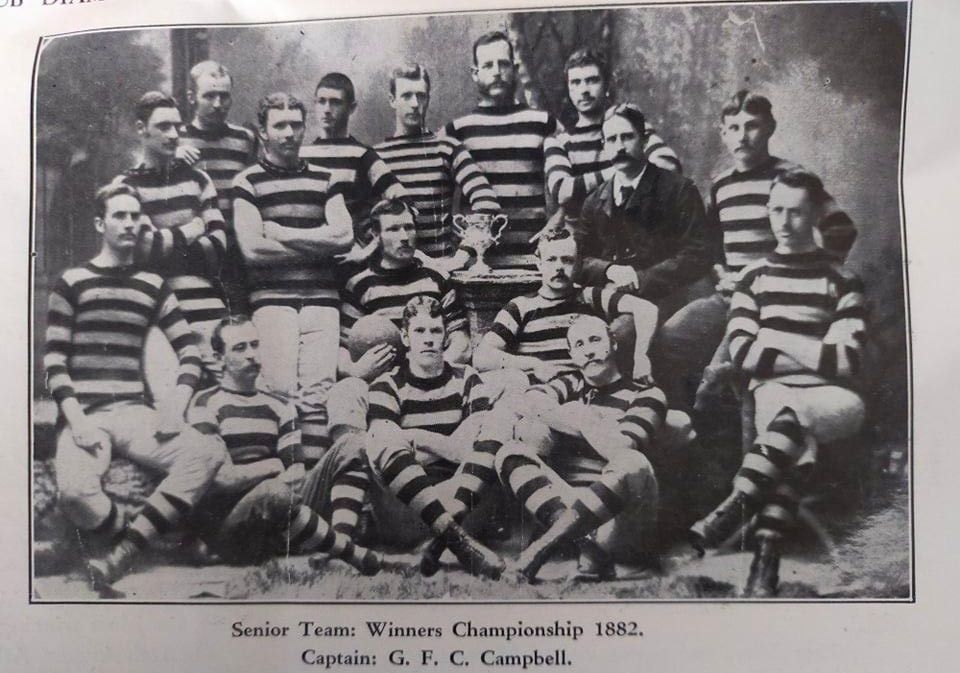 The Athletic Football Club in 1882, with the Union Challenge Cup. George Campbell in the centre holding the ball.

Profiling the people that built and helped shape the game in Wellington, from its inception in 1870 through to the WRFU’s 50th Jubilee year in 1929.

Seven years after the first rugby match in Wellington and the establishment of the Wellington Football Club a second club was formed.

Colonel G.F.C. [George] Campbell is recognised as the founder of the Athletic Rugby Football Club. A player in the Wellington Football Club’s team, he was the man who called the meeting in 1877 at which the capital city’s second club was launched. He was the first Hon. Secretary, and later held the office of President from 1901 to 1937.

Athletic was an offshoot of the Amateur Athletics Association, already in existence.

Athletic was actually almost beaten to the punch by the ‘Karori Club’ which was set up the previous year, but bad weather scuppered attempts for Karori to play Wellington and the Karori club was abandoned before it started.

Athletic held its 60thth Diamond Jubilee in March 1937, but sadly Campbell passed away just three weeks before that weekend’s celebrations.

The introduction of the souvenir programme for the Diamond Jubilee records the start of the club:

“In the 70’s of the last century, there was very little football in Wellington. Only one club was in existence (Wellington) which had been formed in 1871. There was, however, a strong and active Amateur Athletic Club of which Mr. G.F.C. Campbell was the Hon. Sec. In order to keep the members of this club together during the winter months, Mr. Campbell suggested that a football club should be formed. Other members fell in with the idea and a meeting was held on the evening of 12 April, 1877, when it was decided to form a football club. To mark its origin the name ‘Athletic’ was selected.

“An adjourned meeting was held on 23 April when Mr. Campbell was elected Hon. Secretary, and a committee of five members set up; Messrs. C. Major, C. Webb, J.C.R. Isherwood, H. Gully and C. Welch. It was decided that the Club uniform should consist of blue jersey and knickers and a blue cap with a red bargee.

“On 19 May 1877, the first match was played on the Basin Reserve against a team from the Wellington Club, and resulted in a win for Wellington. The game was played in four spells of thirty minutes each, and it was not until two minutes before the final whistle that Wellington secured a try – the only score in the game.

“A return game was played on 8 September, and resulted in a draw – a try each.”

Athletic and Wellington met twice more in 1878, with Athletic winning the first match and the second a draw.

As well as settling into his Athletic club administrative seat for the next 60 years, Campbell was also a leading player and the team’s captain for the first several years of existence.

The WRFU was formed in 1879. Wellington and Athletic, Greytown and Masterton played a series of matches.

In 1882, Athletic won the Senior Championship, taking home the Union Challenge Cup with a converted try to nil victory over Greytown in the deciding match on 12 August.

Campbell and other Wellington players E. Davy, J.T. Dumbell, H. Roberts and H.Udy were selected for the New Zealand team to tour Australia in 1884. However, Campbell had to withdraw from the touring party for business reasons. He was a Colonel in the Wellington Garrison, amongst other things.

He was also involved in the establishment of Athletic Park in 1895, which remained the home of rugby in Wellington until 2000.

The Athletic Football Club went on to have several dominant periods and survived up to 1983 when they merged with Onslow and Karori to form Western Suburbs.

Previous two stories in this series:

Early season form to be tested in round two