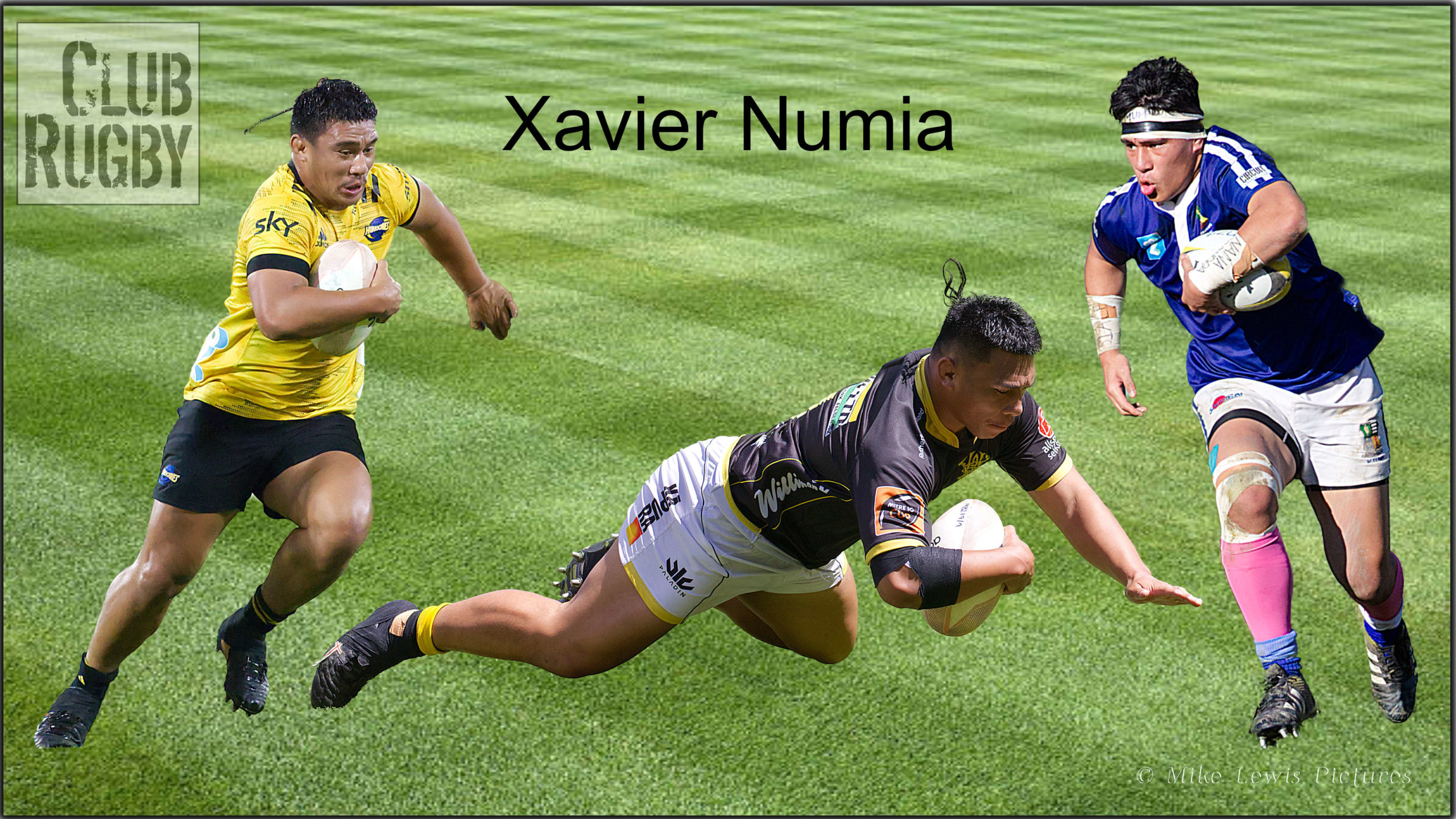 Patience is paying off for Xavier Numia.

The Oriental-Rongotai and Hurricanes loosehead prop and former midfield back has fought back from several forced stints on the sideline to be a key member of this year’s Hurricanes squad in the Super Rugby Pacific competition.

Numia has kept the faith over the past five years since he sustained the first of two knee injuries that both required surgeries during his final year at St Pat’s Town in 2016, a season in which he made the New Zealand Schools side and won the College Sport Wellington Rugby Player of the Year award.

He credits the support of those around him for keeping him strong mentally over these knee and ankle and back injuries that combined to keep him off the field  for extended periods in his formative years in senior rugby.

“Coming back from my injuries and in particular from my second knee operation was definitely a tough time for me,” said Numia, ” I will always thank my partner and my family for keeping me on my toes and for their support that helped me get through.”

His partner is recent Black Ferns flanker Marcelle Parkes, now with the leading Canterbury Women’s NPC side and the Matatū side that starts the Women’s Super Rugby competition this weekend.

This past Saturday Numia was part of a dynamic Hurricanes bench that came on during the second half to help run down the Blues in Dunedin in their second round clash.

It was his replacement propping partner Ben ‘Bam’ May who set centre Bailyn Sullivan away who in turn found captain and Ories teammate Ardie Savea to score the winning seven-pointer to make it 33-32.

Numia said it was all a bit of a blur for him. “At that moment, I didn’t realise that we had won the game. I knew the clock was winding down, but when the boys all started celebrating it was a great feeling and exciting to be part of.”

He explained it is good to come home with that win under their belt and reconnect with family and friends and prepare for their first home match this weekend against the Highlanders.

Numia’s rugby journey started with the Ories juniors, and not in the forwards.

“I was a back at the time, playing there in junior rugby and leading into intermediate school and then at college at St Pat’s Town.

“I was in the midfield until around year 11 and into year 12. I looked around me and amongst other players I saw Billy Proctor there. He pretty much kicked me out of the midfield and into the front row so credit to him for helping me get to where I am now!”

He also thanks one of his coaches at the time for helping him make the transition. “This was my best mate Keelan Whitman’s dad, Sonny Whitman. It was his idea to move me to loosehead prop. So that was an inspired decision.”

A big early game in his First XV career where he felt at home at loosehead was a traditional against St Pat’s Silverstream, up against an always-powerful pack in Wellington school rugby.

Although he is thankful that Asafo Aumua wasn’t playing for Silverstream that day.

Like Numia, Aumua spent his formative years out of the front row – although still in the forwards. Aumua was a loose forward before shifting to hooker.

Alex Fidow is another former loose forward turned front rower. Numia and Fidow grew up together in the eastern suburbs and Fidow went to Scots College.

“I played junior rugby with Alex back in the day. I used to stand there in the backs in the same team as him and watch him take it off the back of the scrum and run over the opposition boys!”

Alex Fidow about to pass to Xavier Numia, for Lions in the 2020 NPC against Otago.

The Numia-Aumua-Fidow trio have since played a handful of games together as the front row for the Wellington Lions.

It was in his last year of school in 2016 that it all started happening for Numia – but unfortunately the year was also marred by his first major injury setback.

He played enough rugby for the St Pat’s Town First XV to impress many. He played in the Premiership Final at Jerry Collins Stadium in a try-less decider against Wellington College that saw the latter win 12-9 on penalties.

In October 2016 he played for the Jason Holland-coached New Zealand Secondary Schools team in their twin wins over Fiji Schools and Australia Schools.

This was followed by his winning the College Sport Wellington Rugby Player of the Year award, beating out current Hurricanes teammate Billy Proctor and Chiefs lock Naitoa Ah Kuoi for that accolade.

But all throughout that season his knee wasn’t right. He ended up having surgery on it, which delayed his introduction to senior rugby for half a year.

It’s the same meniscus injury and subsequent surgery that Jeff Toomaga-Allen had in 2014, going down playing for for Marist St Pat’s against Wainuiomata in that year’s Jubilee Cup semi-final.

Numia came rehabbed his knee all through the 2016-17 summer, returning to rugby via the Ories Colts before getting his first call-up to the Premiers.

His Premier club rugby debut for Ories in April 2017 remains a highlight in his career thus far.

“Just growing up and seeing all my cousins and my uncles playing at that level a goal was always to put on the jersey and run out for the club, so to do so was an honour for me.”

His Premier debut wasn’t just any game, it was the famous 30-30 2017 Anzac Day draw at the Polo Ground between his club Ories and local rivals Poneke for the Jimmy Grbich Shield.

Numia playing in his debut Premier club rugby match against Poneke in 2017.

He played 10 matches for Ories in his maiden season at club level.

He then made the Wellington U19s, then the New Zealand U120s camp in early 2018 before injuring his ankle and missing a large part of their early campaign.

He rehabbed and came back to make the 2018 New Zealand U20 squad that were knocked out by South Africa 32-31 in the semi-finals. Numia played three matches at that tournament and his teammates included current Hurricanes players Devan Flanders, Billy Proctor and Bailyn Sullivan.

Later that season he made his Wellington Lions NPC debut against the Southland Stags. “Putting on the Wellington Lions jersey and making my debut for them was something special and I will hold that forever.”

He was training with the Hurricanes in early 2019 but wasn’t expecting the call-up to play in the first match of the year, against the Waratahs in Sydney.

“At the time I was just a replacement player in the Hurricanes squad, and I got called in for a week and on the Monday I was just sitting in the team room in the meeting and they were naming the team for the first game. They came up to the bench and my name popped up at 17. I didn’t know how to react at the time, I was pretty emotional, and I couldn’t really believe it at the time. That is a time that will sit with me forever as well.”

He made nine appearances for the Hurricanes in 2019, returning to play for the Lions but a lower back injury laid him low towards the end of that year.

Returning to play for Ories in 2019, against Poneke in the Swindale Shield.

“In my second game back in 2020, I left the field for concussion, but my knee wasn’t right and a visit to the physio and then for a scan confirmed that I had torn my meniscus again.

“That was me done for the rest of the year for the Hurricanes. To compound this, it was at the start of the first Covid outbreak and I initially couldn’t get surgery because of that. But credit to those around me for helping me through it.”

Numia returned in September 2020 and went on to make eight appearances for the Wellington Lions, including seven starts at loosehead prop. In 2021 he played 13 matches for the Hurricanes and then seven for the Lions in the NPC.

Outside of rugby, Numia has done some building in the past and this is a possible career choice for the future.

But for now, with his injuries hopefully behind him, rugby is his fulltime commitment and both himself and supporters hope it will be for some time to come.

The Monday rugby wrap: 28 February (some news and information to start the week)

Aisle be Back: Hurricanes v Chiefs. Updated with teamlists.