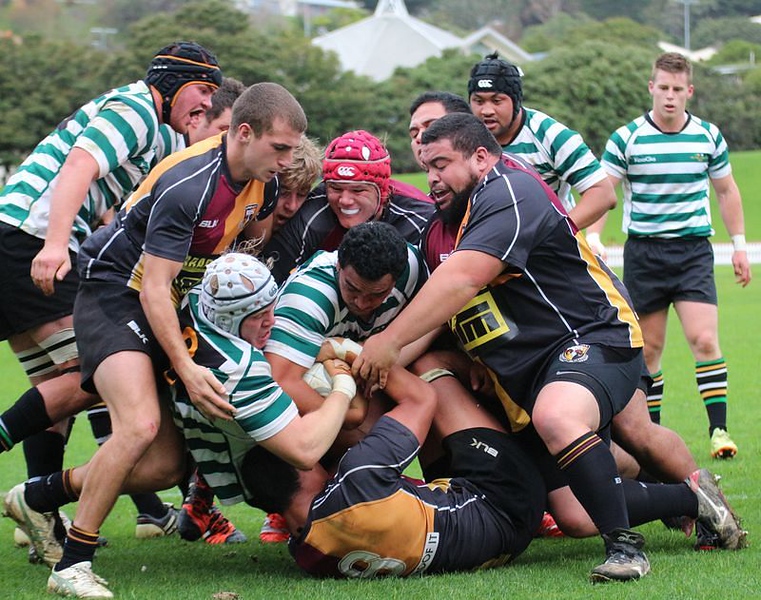 Random rugby shot of the day. When Old Boys University beat the Upper Hutt Rams 38-22 at the Basin Reserve in 2015.

UPDATED 2: It’s Valentines Day today, but the only date we all need to be concerned with is the start of the 2022 rugby season, which is scheduled to be starting over the next few weeks when pre-season matches commence.

There is one representative match scheduled for this coming Saturday, with the Wellington U20s and the Hawke’s Bay U20s meeting in neutral Palmerston North. Match details to be confirmed at a later point. Both these teams have one thing in common and that is they have lost to Manawatu over the past two weekends, as noted below.

Manawatu beat Hawke’s Bay 28-21 in an under 20s representative hit-out at Tremain Field, Napier on Saturday.

On a soggy surface, and with unlimited substitutions, the visitor’s superior lineout drive and excellent starting first-five Isaiah Armstrong-Ravula was the difference in a willing, scrappy contest. Manawatu led 14-0 with two converted tries before the grunt of the Magpies pack saw them rumble over for a try from a lineout drive. Manawatu scored in the left corner when Armstrong-Ravula slashed through and delivered a cut-out pass to space. Bay skipper Cooper Flanders muscled over to reduce the deficit to seven as Manawatu appeared to lose direction. However, their lineout remained a strong suite and when they earned a lineout five metres shy of the hosts line they proved unstoppable. Hawke’s Bay scored a converted try on fulltime, reward for stubborn attack. Their replacement left winger looked especially handy.

As this column noted last week, Manawatu have a talented group of young players coming through. As well as home grown talent such as their U20s captain and flanker Elijah Crosswell and midfielder Kyle Brown – to name two – players such as Armstrong-Ravula are from outside the region. Armstrong-Ravula is the nephew of Richie Mo’unga and comes to Manawatu and Hurricanes territory out of St Andrew’s College in Christchurch.

Ardie Savea (Oriental-Rongotai) has once again been named as captain of the Hurricanes for the 2022 Super Rugby Pacific season.

The experienced loose forward’s first game against the Crusaders in Round 1 will mark his 109th cap for the franchise since his debut in 2013.

Savea says he is honoured to have the opportunity to lead once again.  “I am honoured to be able to lead and grow with the boys in 2022 and I’m excited to lead the team in the inaugural Super Rugby Pacific Season. Obviously, we are starting the new season in our team bubbles down here in Queenstown, but we’re looking forward to the challenge. We can’t wait to get back to Our House and play in front of our fans at Sky Stadium.”

Savea’s rugby career spans his entire twenties. Debuting against the Waratahs in 2013, Savea has been part of the All Blacks since 2016 and was part of the Hurricanes outfit which won the Super Rugby title that same year. He captained the All Blacks to victory in the Rugby Championship and topped 2021 off by adding All Blacks Player of the Year at the 2021 ASB New Zealand Rugby Awards to his list of personal accolades. Savea’s debut as captain, came in his 100th Hurricanes match against the Blues at the beginning of the 2021 season.

The Black Ferns have named 29 contracted players for the year ahead with Ayesha Leti-I’iga the only Wellington player contracted. The dynamic wing was a standout on an otherwise miserable November tour which saw New Zealand lose to England and France by record scores. Rookies Ariana Bayler, Liana Mikaele-Tu’u, Kelsie Wills, Krystal Murray, Amy Rule, Renee Holmes and Georgia Ponsonby  are retained having shown promise but unfortunately there is no place for Ories lock Joanah Ngan-Woo or Norths loosie Dhys Faleafaga. Te Kura Ngata-Aerengamate whose social media commentary on coach Glen Moore triggered a yet to be published independent review into the Black Ferns culture is a conspicuous cut. New players include Canterbury outside backs Grace Steinmetz and Amy du Plessis while experienced Counties duo Arihiana Marino-Tauhinu and Hazel Tubic return.

The Hurricanes beat the Crusaders 27-24 in their second and final pre-season fixture in Queenstown on Saturday. The Crusaders looked to be taking control when up 24-10 midway through the second half, but the Hurricanes came back with three tries to win. Alex Fidow scored in the 79th minute from a multiphase build-up near the line, before a long range counterattack saw Peter Umaga-Jensen pop a pass in the tackle on his inside to Billy Proctor, who handed off to Aidan Morgan to score. The Hurricanes and the Crusaders are scheduled to meet again this Saturday in the opening round of the competition proper.

Meanwhile, the Moana Pasifika squad is isolating in their Queenstown hotel after seven members tested positive for Covid-19. Their opening competition match against the Blues has been postponed.

Hurricanes hopes of a flying start to Super Rugby Pacific took a blow last week with All Blacks halfback TJ Perenara suffering an ACL knee injury from what was described as ‘an innocuous knock’ during training on Tuesday. Coach Jason Holland said Perenara was likely to be out of action for about a month. Read more HERE

Below: Bring back the sevens?

Below: The Wellington club rugby competition will miss one of its favourite players in 2022, with Greg Foe heading to Sydney.

Dan Biggar celebrated his 100th cap with a 15-point haul that included a drop-goal as Wales beat Scotland 20-17 in the Six Nations. Scotland haven’t won in Cardiff since 2002. Biggar is the seventh player to reach 100 tests for Wales.

France fielded a starting forward pack with a combined weight of 931kg against Ireland and had four 19 stone replacements on the bench. Gabin Villiere became the first Frenchman to score a Six Nations hat-trick since Vincent Clerc against Ireland in 2008 last week against Italy. This weekend the diminutive winger punched above his weight on defence and looked more than usual with ball in hand. When he started out at Rouen, he played at halfback, centre and then wing. He scored two tries in the first test against Australia in July last year, remembering that the French side was essentially a B side. Francios Cros was a change at blindside flanker for France following their previous match against Italy. The backrower topped the tackle count and was man of the match in a stirring display.

Black Ferns lock and 2017 World Cup winner Charmaine Smith is on the road to a dramatic comeback. In 2020 she announced her retirement from rugby following a debilitating neck injury. In 2021 the prognosis of her condition improved, and her doctor was optimistic about her being cleared to return to the game in the future. After the birth of her child last year, Smith was cleared of any residual health issues so will feature for the Blues in Super Rugby Aaupiki. She told Allblacks.com: “A week after giving birth, I had a progress scan and was amazed and relieved that I was completely clear. I am fully fit and have no ill-effects.”

With all matches in the opening phase of Super Rugby in Queenstown settled over a week ago, why is there any excuse for the appalling picture quality of the pre-season games on the weekend.

A rugby player who was seriously hurt while scoring a try during a match has died. Evesham Rugby Club player Jack Jeffery, 27, was taken to hospital after being injured in the seniors league game against Berkswell and Balsall on Saturday. His father Glenn said he died “doing what he loved the most, playing rugby”. Read more HERE

The OBU Impalas coaching squad for 2022 has been confirmed:

A new regular series of articles this year, looking at many of the early rugby identities in Wellington rugby and some people that made an impact on the game in its early years, from players, administrators, referees and sometimes all three. The first is Charles Monro: