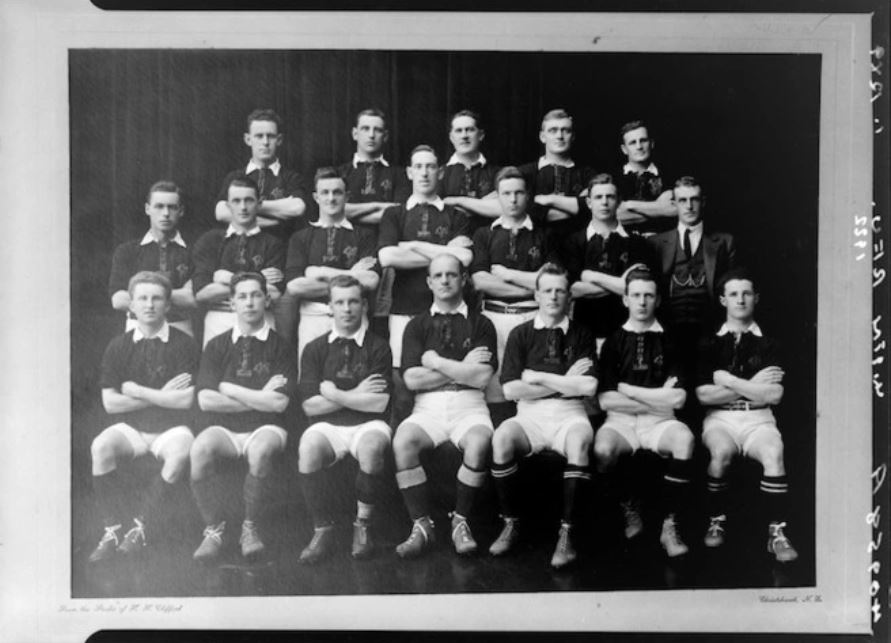 The Wellington team that toured the South Island in 1922.

Whilst club rugby at the Senior Championship level was as strong and competitive as ever, before or since, the second great era of the Wellington rugby team drew to a close in 1922.

“The boom period of the immediate post-war years was on the wane so far as Wellington was concerned, and our representative record was the least impressive for several years.

“Some of the older players were dropping out, and many young players coming forward were inexperienced and lacked big match temperament.

Wellington’s 1922 representative season started on Wednesday 14 June with a one-off match against the New Zealand Māori squad prior to their departure to Sydney. The two teams drew 6-6 in a fast, loose game.

Their first game of the season against provincial opposition was played on 5 July in Hawera against Taranaki. Wellington won this 13-3, with reports insinuating that both packs cancelled each other out but it was Wellington’s superior pace out wide that got them home.

Next up was their first home match of the year at Athletic Park against Hawke’s Bay. This was a mid-week fixture and holders Wellington put the Ranfurly Shield on the line. Heading into the game, Wellington’s record against Hawke’s Bay was played 24, won 20, lost two, drawn two, 334 points for and 75 against.

But this counted for nothing as the well-drilled and highly motivated Magpies caught Wellington napping. When their New Zealand Maori captain Sam Gemmell set up their second try they were up 11-3. Wellington had the wind in the second spell and closed to 11-6 with a try to Udy, but Hawke’s Bay scored again through McNab and they led 14-6.

Wellington upped the tempo, but two missed kicks on goal and some poor passing whilst hot on attack put paid to a comeback. When Maurice Brownlie intercepted and ran 40 metres to set up their next try it was all over for the home team. A consolation try wasn’t enough. The final score: 19-9.

Five-eighths wrote in his Dominion column the next morning that “to say that selectors, club players and the sporting public were disappointed with the showing of Wellington on Wednesday against Hawke’s Bay would be expressing the truth mildly.”

On 16 August a ‘Manawatu-Wellington XV’ played the All Blacks in Palmerston North. The national team had just returned from New South Wales (see below) and this was the first of two internal matches. The home team was mostly a Manawatu selection with four University club players added in, these being: Keith Siddells (an original selection for this All Blacks team), wing J.O.J. Malfoy, halfback J.P. Trapski and forward J.J. Troy. As an aside, Malfoy later toured Argentina in 1928 with the British team.

The All Blacks were too strong in Palmerston North, winning 45-11. They ran in 11 tries, with Canterbury wing W.A. Ford scoring a hat-trick and Petone and soon-to-be Auckland five-eighths Mark Nicholls scoring two tries and landing three goals.

Wellington’s next game was 10 days later against Taranaki in their return fixture at Athletic Park. This was a curtain-raiser to the second internal All Blacks fixture versus New Zealand Māori fixture.

Wellington lost this game too. On a sodden ground, Wellington scored two unconverted tries to lead Taranaki 6-3 at halftime. But Taranaki came back in the second half, eventually scoring five unconverted tries, the final try on fulltime to snatch a 15-14 win.

In the match that followed, the All Blacks won 21-14, but the Māori side did well to come back like Taranaki had from being 21-3 down.

Wellington next hosted Auckland on 2 September and bounced back to win this one 19-11. Wellington led the whole way through the match in front of 8,000 spectators in a contest that both local media operators reported as “uninspiring” and below average quality.

The following week, Wellington teams played Otago (away) and Whanganui (home) on the same day. The two Wellington sides were more or less evenly matched, with several frontline players unable to make the trip south.

The game against Whanganui saw Wellington take an 11-0 lead early in the second half when Poneke’s Fred Tilyard scored their second try, following a first half try to Bert Calcinai and a conversion and dropped goal to Doc Nicholls.

But Wellington again seemingly lost their concentration (no mention of wind being a factor) and Whanganui came back to trail 15-14 with time almost up. Right on fulltime, the team from the river city spun it wide and scored to take the win.

The same team that lost to Otago continued their southern tour, meeting Southland and Canterbury over the next week.

Against Southland, the home team had first use of a favourable wind and took advantage to lead Wellington 14-3 at halftime. Wellington played better in the second spell but couldn’t score anymore than three unconverted tries in total so Southland won 17-9.

Meanwhile back at home, the local University team (fourth in the Wellington Senior A Club Championship) met the touring Sydney University team in a one-off match. The visitors, featuring several players that had met the All Blacks and NZ Māori teams several weeks earlier, were too strong in winning 21-14 in a biting, wet southerly.

A comprehensive victory at last four days later to Wellington – beating Canterbury 25-9. Wellington won seven tries to two, with All Black Sid Shearer scoring two tries. The match was played in poor weather (probably the same southerly that University match was played in) but the Wellington combination was far superior.

There was one scheduled match remaining in the season for the Wellington team, hosting a combined Horowhenua-Manawatu side at Athletic Park. The records in Swan and Jackson’s Wellington rugby history book show this fixture as being a “B” team game for Wellington but several big-name players were listed in Wellington’s side such as All Black forwards Calcinai and Shearer and Doc and Ginger Nicholls (also a 1922 All Black) in the backs.

The visitors played with dash and elan and went into halftime leading 11-0 – with a strong wind at their backs. Wellington came back in the second half and overtook them to lead 14-11, before Horowhenua-Manawatu scored again lead 16-14. But with barely a minute remaining, Wellington wing Carmody scored and Doc Nicholls converted to give Wellington a “lucky” 17-16 win.

Earlier in the week the WRFU had answered an SOS call from Auckland mid-week to send a team up for a match the following Saturday.

The team for this trip was listed as a ‘Wellington XV’, and it was basically a club XV and a smattering of players who had recently gone on tour with the ‘B’ side. The final score was 54-0 to Auckland, with a notable player in the Auckland team being Mark Nicholls who had just transferred up there after the club season (later to return). Nicholls and 1921 All Black teammate Karl Ifwesron (injured and unavailable for the All Blacks this year) were both prominent for Auckland.

Wellington’s B team also played a programme of matches in 1922 on a South Island tour for a record of won four and lost one. All these matches were recorded as ‘first-class’ ones.

Like Wellington’s, the 1922 All Blacks were not a vintage combination. Several players played their last games for the All Blacks in their three-match international series against New South Wales. NSW was keeping the game alive in Australia at the time with the Queensland in recess at the time.

Ten players of 24 were wearing black for the first time and others were starting to make their marks at provincial level such as Hawke’s Bay pair Maurice Brownlie (on this tour) and George Nepia (yet to be discovered), who would both make their reputations as all-time greats on the 1924/25 tour.

The All Blacks played a pre-tour match against Wairarapa, winning 12-11 at Carterton, before losing 2-1 to NSW and beating two other teams in other games.

Returning home, they beat a Manawatu-Wellington XV 45-11 and the New Zealand Māori XV 21-14 (as noted above).

The New Zealand Māori team that also toured New South Wales was successful in winning their two-match series 2-1 and winning both their other games. In the third and deciding match against NSW they came back from 22-6 down to win 22-21 with a late converted try.

The New Zealand Māori squad also played four other fixtures against New Zealand provincial opposition before and after their NSW tour. They lost 14-3 to Horowhenua in Levin, beat North Auckland 13-9 in Whangarei and beat Poverty Bay in Gisborne (score TBC).

Thus ended the 1922 rugby season, one of many highs and several disappointments. Some of the most memorable rugby ever at club, provincial and international level all lay ahead over the remainder of the 1920s decade.

This time next year we will review the 1923 season.

From the previous year: