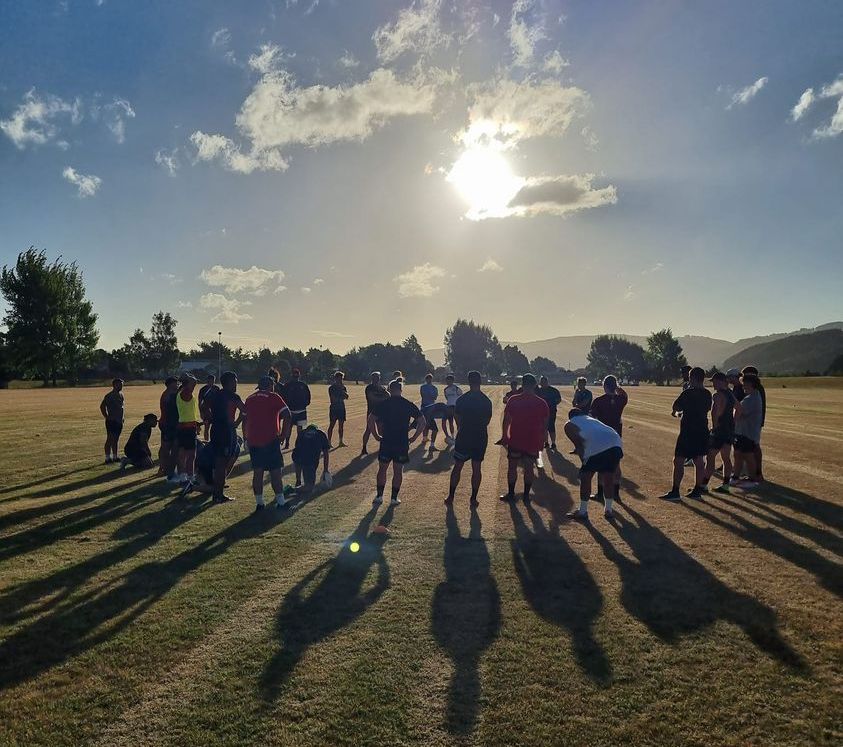 The Upper Hutt Rams at pre-season training last week. The shadows are slowly lengthening, which means the start of the rugby competitions are drawing nearer.

In theory, we are counting down to the start of the 2022 rugby season.

As scheduled, the Super Rugby squads play their first two matches this coming weekend, the Hurricanes meeting the Crusaders in Christchurch (already transferred from Blenheim).

Let’s hope Omicron is not on a collision course with the start of the club rugby seasons. We can only wait and see.

Our Monday column returns for the year. If you have any news, stories or information or want to get in touch, please do so by emailing editor@clubrugby.co.nz or messaging us on your favourite social media channel (except Tik Tok, we are not there yet – see below)!

A proposed centralised hub for the six NZ-based Super Rugby squads could be a reality in just a matter of days.

Rugby officials have been finalising a radical plan in the face of the Omicron variant which has the potential to wreak havoc on the new Super Rugby Pacific competition.

A brush with COVID-19 has the potential to sideline an entire team, with Government rules mandating close contacts must isolate for 10 days.

With Omicron quickly spreading, that scenario is becoming more likely by the day.

💪 Our players have started to learn our new club haka under the guidance of Norm Broughton. Our haka has been composed by former Premier player Brendon Watt and will be used to celebrate our club whānau. pic.twitter.com/zJGhUCr0ZY

English Premiership giants Wasps have claimed they simply could not compete financially with the Scarlets after the Welsh team announced the signing of All Black Vaea Fifita.

It’s an eye-opening statement that will surprise many given the well-documented financial struggles of the Welsh regions.

But English clubs are facing their own issues with changes to the salary cap in the competition only allowing a playing budget of £5m, plus one marquee player next season.

It means the 29-year-old former Wellington Axeman, who has 11 caps for the All Blacks, is swapping Coventry for Llanelli from next season in what is a major coup for the Scarlets.

After 141 appearances and 1142 points for Wasps 38 year-old Jimmy Gopperth is on the move to Leicester Tigers who under former English lock Steve Bothwick have won 16 of 17 games in all competitions this year.

Former Petone, Old Boys University, Wellington, Hurricanes and Blues flyhalf Gopperth has been in the UK since 2009. He spent four years at Newcastle and has been at Wasps ever since.

Evening rugby will feature in the early stages of this year’s Taranaki premier club rugby competition.

For the first three weeks, most premier matches will start at 7:35pm on Friday nights at selected venues, with the opening round scheduled for Friday, April 8. Other senior grades will kick-off at 6pm.

From the end of April, matches will go back to the traditional afternoon kick-offs.

The aim was to deliver quality experiences to rugby’s participants and having competitions reflect their needs, he said.

“We have implemented some changes focused on diversifying our offerings and freeing up weekends for participants.

“This year will be a pilot with many clubs having lighting upgrades completed its sure to be an outstanding showcase of rugby in Taranaki and hopefully something we see more of in following years.”

Six Nations Rugby and TikTok have announced a landmark partnership that will see the entertainment platform become the Title Partner of the Women’s Six Nations, as well as an Official Partner to the Guinness Six Nations and Autumn Nations Series, from the 2022 season through to 2025.

No jab no play… for 5-11 year olds. Is this coming? At present this is ‘recommended.’ We have been contacted saying this is coming, but not substantiated so we will park this subject for now.

Congratulations to Geoff Cridge for joining the Waratahs in 2022 – following in the footsteps of William Hardcastle and many other fine forwards down the years from Hurricanes territory to NSW.

Become a Tahs member today: https://t.co/xNqKoe2Ev3
(Memberships for as little as $35)

A recent training day for the mascots:

It has to be bad luck when, just as you reach over the try-line and ground the ball, an opposing player lands heavily on your shoulder, dislocating it.

But surely it must be an incredibly rare coincidence when that misfortune happens to you twice – almost exactly a year to the day, in a club rugby game against the same opposition.

South Africa skipper Siya Kolisi has been named SA Rugby’s Player of the Year after a stunning 2021 in which he led the Springboks to a British and Irish Lions series success.

The 30-year-old edged out strong challenges from his national team-mates Lukhanyo Am, Damian de Allende, Eben Etzebeth and Makazole Mapimpi to become the first Bok captain since Jean de Villiers in 2013 to win the top award.

English Premiership club Exeter Chiefs will drop their indigenous American-themed branding in the summer after criticism from fans, it was confirmed on Thursday.

In a statement the 2020 English and European champions said its new branding would feature the Celtic Iron Age Dumnonii Tribe which once inhabited Devon and Cornwall.

“Times are changing and so are we — now is the time to move forward!” it said.

“We are excited to welcome in the next era of rugby within Exeter,” chairman and chief executive Tony Rowe said.

“Exeter has and always will be the most important term in our overall identity. The term Chiefs, however, is equally entrenched in our make-up, going back to over a century ago when teams in this region would regularly call their first teams that of the Chiefs. We are Exeter, we are the Chiefs!”

The Canterbury Rugby Union is mourning the loss of former Chairman and club rugby stalwart David Rhodes, who passed away in Christchurch overnight surrounded by loved ones, aged 72.

Spending 12 years on the Canterbury Rugby Union board, six as Chairman, Rhodes committed much of his life to rugby, including over 60 years to Sydenham Rugby Club as a player, coach and then administrator. He also dedicated 7 years to the Crusaders board before serving as Vice President and then President of the New Zealand Rugby Union between 2013-2017, following in the footsteps of his farther Charlie, who was also a President of the Canterbury and New Zealand Rugby Unions.

Welcome to Jamaica, have a nice day

New Zealand Rugby (NZR) has revealed new playing and training kit for its Teams in Black to mark the start of its six-year partnerships with Global Partner ALTRAD and Performance Partner INEOS. Both brands will be prominent on their uniforms. As was canvassed elsewhere earlier this past weekend, how much wording and space taken up by advertising is too much?

Alosio and Moana Pasifika on the board in Super Rugby Pacific