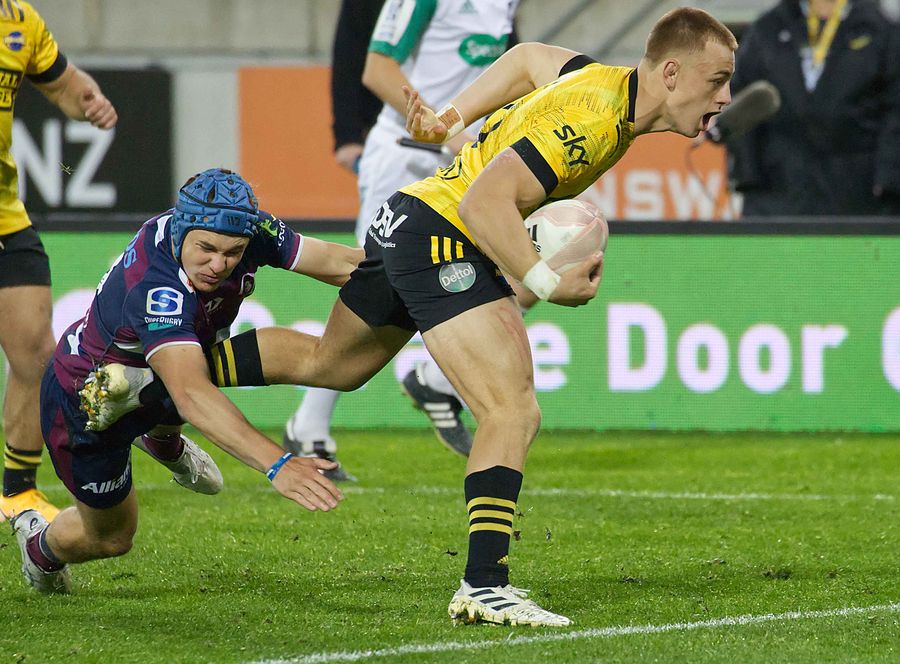 Ruben Love is the first player since Jeff Wilson to represent New Zealand secondary schools’ teams at both rugby and cricket and the first player to be born this century to play for the Hurricanes.

It’s been a whirlwind three years for Love who has been training hard with the Hurricanes ahead of the scheduled start of the Super Rugby Pacific competition in three weeks.

The Wainuiomata and Wellington Lions playmaker is looking forward to kick-off in 2022.

“It has been a pretty hard pre-season and all inside five weeks, having to throw in the content, plus the running load and all the normalities of pre-season training it’s been full on,” said Love, who’s dedication and talent last year saw him become 14th player aged 19 to debut for the Hurricanes.

As scheduled, it all starts this coming weekend with the first of two pre-season matches, both away, against the Crusaders and then the Blues.

Last year the Hurricanes inside backs stocks were down, with halfback Jamie Booth and first-five Jackson Garden-Bachop both sidelined with long-term injuries and TJ Perenara taking a season off to play in Japan.

The elder statesman of the group Perenara returns from Japan, both Booth (broken leg) and Garden-Bachop (Achilles tendon) are back and fit, while the likes of Love, Aidan Morgan and Cameron Roigard are all in the mix alongside Love.

Both Love and Morgan can play fullback as well, handy back-up to another All Black and senior player, Jordie Barrett.

“Having the likes of Jackson and Aidan, there are some high-quality players and we all feed off each other,” said Love.  “Jackson’s got tips and tricks for everything – he is very solid, and he reads the game well and the way he sees things and knows what is going to happen before it does is a skillset that Aidan and I are trying to learn from him.”

His first start was his next appearance in a 27-30 ‘golden point’ loss against the Crusaders, when he became the 21st Hurricanes player to start a Super Rugby match at first five-eighth and just the second to do so in a match against the Crusaders for the first time after Riki Flutey in 2003.

In all, Love made seven appearances for the Hurricanes in his debut season in 2021. He sees himself as primarily a first-five but can also cover fullback, something not unusual in New Zealand at present.

Love’s first touch of the ball against the Crusaders last year:

“Most teams are playing with dual playmakers now,” Love added. “Like the Highlanders with Mitch Hunt and Josh Ioane and the Chiefs with Bryn Gatland and Damian McKenzie. Having good ball skills across the park reflects the way that defences are evolving and getting better…it’s also that different coaches have different styles so it’s a way to fit in with the game system.”

After playing for the Hurricanes in 2021, Love played his second NPC season for the Wellington Lions, starting five of his eight matches at first-five and three at fullback.

Love has a strong background in cricket, a wicket-keeper-batsman and member of the Palmerston North Boys’ High School First XI since Year 11.

He has already represented both the New Zealand U18 Māori and New Zealand Schools Barbarians school sides.

In 2018 it was his intercept try that helped the Māori team to their 21-20 win over the Barbarians, as below:

Last weekend he played in the annual Black Clash cricket match at Bay Oval, for team rugby. He was into the game early, catching out none other than Stephen Fleming on the boundary. His rugby team won by 6 wickets, and he wasn’t required with the bat.

“Apart from the Black Clash match, I am not involved in any cricket. I love watching it, any sort of cricket that is on I watch because I love the game and still understand how it works and I love how captains make decisions and batters approach their games in different situations.”

He has also been playing tennis for a couple of years, a sport he is keen to continue playing in the future.

In establishing his rugby career, Ruben follows a long line of Loves in the sport.

The Love family were prominent in the Hutt Valley at the turn of last century and two brothers, Matiu and Eruera, played for the Māori All Blacks in the 1920s, both touring overseas with this team. Erurea served in Greece, Crete and North Africa WW2, becoming the commanding officer of the Maori Battalion and was killed at Ruweisat Ridge, Egypt in July 1942. A third brother, Makere [later Sir Ralph], Played and coached rugby for Onslow club, was a referee in Wellington and Whanganui and served as secretary of the Māori Advisory Board of the New Zealand Rugby Football Union.

Matene was a first-five and fullback for both Manawatu and Whanganui throughout the 1980s and played a combined 106 first-class games and Danny was a halfback and first-five for Manawatu and Counties and was also in the first Crusaders squad in 1996 at the tail-end of his career and played 81 first-class games. Danny has also recently coached the Eastbourne club side in Wellington.

“Every weekend when we had family functions or chilling out with our cousins, our parents would always be chucking balls at us – it was pretty infectious when I was a kid.”

“One would be beating Gisborne Boys’ High School in my final year in 2019. I hadn’t lost to them before, but I remember going up there and playing at the Rectory. It was a really physical game, they were smashing us off the ball, half the town was there watching. I remember taking a penalty from the sideline and a bunch of recent school leavers were right behind me giving me stick. Winning that game was a massive relief and my mates and I still talk about that one.

“Another game that springs to mind is when we beat Napier Boys’ High School in my final year to take the Polson Banner home.”

“I was injured for a lot of the 2020 season, my ankle was playing up. I felt like I was letting my new club down a little bit. There was a bit of hype that some kid who has just signed with the Lions has come in and now he’s not playing.

“I came back pretty late in the round and we had Petone at home for the Darren Larsen Cup. We won the game at the death from the flukiest of tries that I have ever seen.”

After conceding a late Petone try and surrendering their lead, Love called a long kick-off and wing Trei Mu chased up to score the unlikeliest of match-winners:

“That try was all on Trei, he could have given up the chase but he stuck with it. I thought the ball was going to go dead and that was the end of the game, but it bounced perfectly for him to sore off.

“That one will stick around Wainuiomata for a while I think, to see the whole club celebrating at the end and at the after match was awesome.”

Love went on to play five matches in 2020 for Wainuiomata, missing their 17-15 Hardham Cup final win over Hutt Old Boys Marist because he made his Wellington Lions debut the previous night.

In the Hurricanes environment last year, he didn’t add to his club rugby caps in 2021 but hopes to again in the future.

“Obviously I want to play for the Hurricanes, but rugby is rugby at the end of the day and I am just grateful to be playing for any team and I have loved my time with Wainuiomata.”

At present, rugby is Love’s sole focus, but in the future, he hopes to take up some study.

“I would love to study education and te reo Māori, and at the end of this year I will probably pick up a few papers and get into that.”

His current stint with the Hurricanes runs through to 2023.