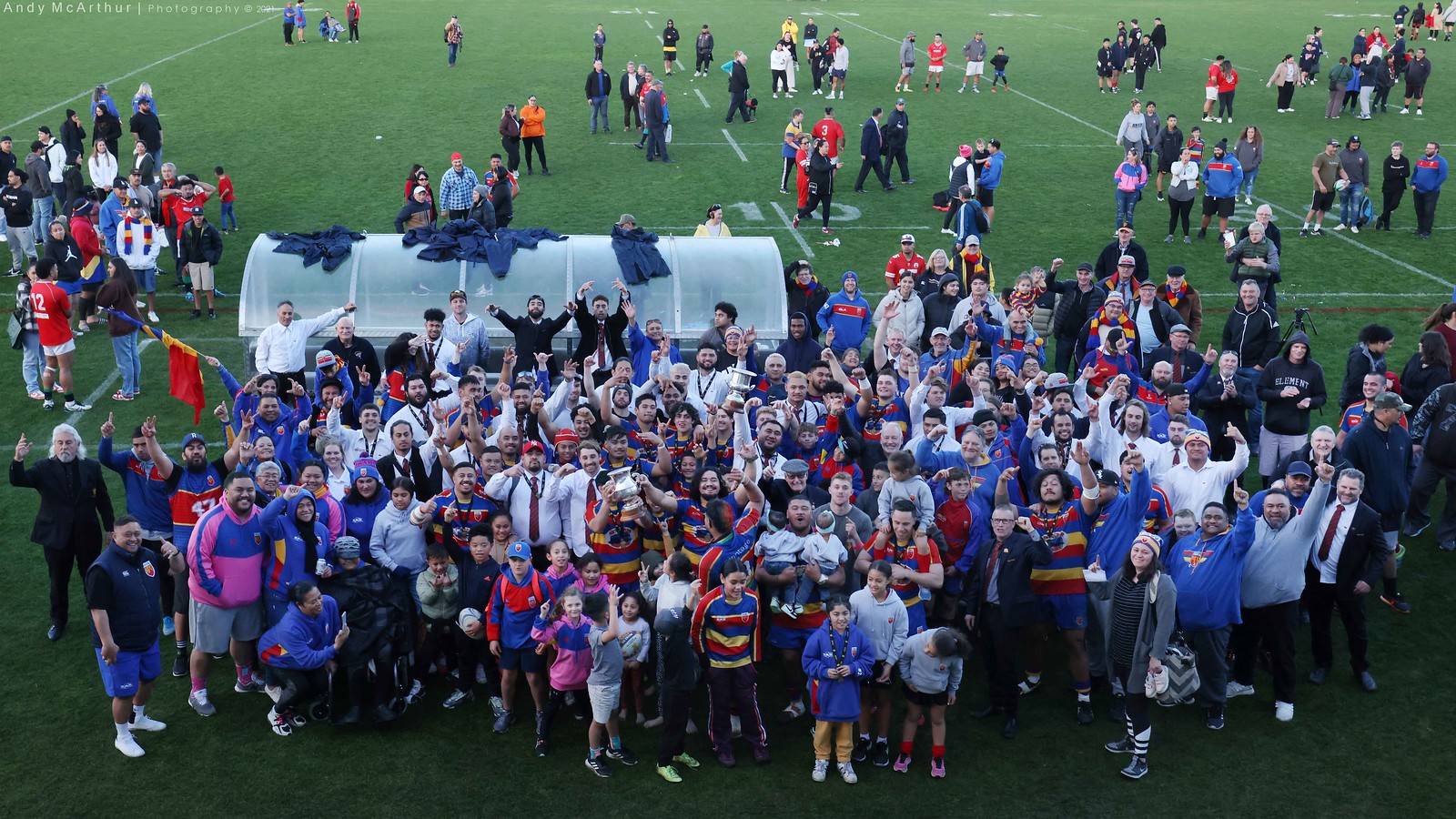 The Tawa RFC celebrates with the Jubilee Cup last season at the Hutt Rec, after beating Marist St Pat’s in the final. Can both these teams rise to the top again in 2022? Photo: Andy McArthur.

Happy New Year and welcome to a new season of rugby. As always, we kick the year off with some questions and topics of interest. See below.

Format of club rugby locked in for three years

Late last year, the format of the Premier Wellington club rugby competition for the next three years was confirmed by democratic process. The outcome is status quo for 2022, 2023 and 2024 at least, with Wellington’s 14 Premier clubs contesting a full 13-round Swindale Shield on consecutive Saturdays followed by a four-week knockout to decide the championship winners. Has the correct decision been made on this? From a purely marketing perspective it would have been great for the WRFU to have been able to publicise and promote a full Jubilee Cup competition. Of course they also have the ‘pull’ of the NPC season, with club rugby having to be played inside a ‘window’ to make way for that so an ongoing problem and nothing new here.

Following on from the above, will there be a change in the order of teams for 2022. Can Avalon, Paremata-Plimmerton, Johnsonville or Wellington, and to a lesser extent recent under-achievers Upper Hutt Rams and Poneke, rock the apple cart? Will last year’s emphatic Jubilee Cup champions Tawa be stopped? Some coaching changes too, so what difference will the likes of Gerrard Fasavalu at the Hammerheads and Dion Waller at the Axemen have on their clubs’ performance? Plus at least a couple of noted player transfers on the cards, of which we will cover closer to the season kicking off.

Assuming the worst is over, what will the Covid-19 aftermath do to playing numbers? Compulsory vaccination passes have recently been mandated by New Zealand Rugby for all teenaged and senior rugby players and people involved in the game for 2022. So will some people opt out on personal, health, economic, religious or other reasons to the detriment of the local game? Likewise, a possible extension of this to junior players. Similarly, some summer music festivals such as the popular Rhythm and Vines in Gisborne have been re-routed to April, so how many players will prioritise these those weekends?

Will we get a season that is remembered for what happens on the field, rather than off it? Will clubs take greater accountability in dealing with incidents of foul play after a disastrous year of bad headlines? The WRFU exhausted a lot of financial resources on lawyers in 2021 that could have otherwise been put back into local rugby, so can we hope that most of this can be diverted in 2022 to positive spending outcomes?

The Bay of Plenty Rugby Union formed a judicial process based on the restorative justice principles, where tamariki and rangatahi admit their behaviour as detailed in the referees’ report, the matter is then referred to a Whanau Group Conference involving the player, his whanau, the referee and coaches, managers and schoolteachers in charge. The purpose of these conferences is to ensure that the player accepts responsibility for the actions on the field, and suitable actions or tasks are put in place where the player can learn. Is this a better process for Wellington rather than lawyers in suits arguing? Alternatively, how about live-streaming these judicial hearings for transparency?

As always, the rugby year is ushered in with the men’s Super Rugby competition. Since 1996 there have have been numerous changes and tweaks to the format of the competition, and more coming in 2022. There will be strong interest in the two new teams this year, Moana Pasifika and Fijian Drua, and many parochial fans of the existing franchises are sure to adopt one or both of these as their ‘second’ teams in 2022. As it stands, the Hurricanes play Moana Pasifika on Saturday 12 March in Wellington and this should be a popular afternoon of rugby. Their season starts on 19 February against the Crusaders (away) and their first home game is on 5 March against the Highlanders. How will the Hurricanes fare in 2022 in the new Super Rugby competition?

Captain Hurricane will be dusting off his kit soon for one or two pre-season matches ahead of the start of the Super Rugby competition on 19 February. Photo: Hugh Pretorius.

A big year for Women’s rugby in 2022, with the inaugural Super Rugby Aupiki competition and then the home Rugby World Cup. How will organisers sell tickets to the 2022 Women’s World Cup after the under-achieving form of the Black Ferns on the Northern Tour? Furthermore 11 matches are scheduled to be played in Whangarei where recently there has been greater COVID anxiety than anywhere in the country? How will coaches bridge the gap between the most fit and talented women and the least in Super Rugby Aupiki? The starting point between an amateur and Sarah Hirini is extreme. How will the Black Ferns learn to defend rolling mauls in time for the World Cup? Who can even remember a rolling maul in a women’s match anywhere in New Zealand?

Staying on female rugby, wouldn’t it be great for the players, the schools and the game if the leading schools got more regular competition against like-minded schools? The problem is that, from Southland to north of Auckland, there are several strong girls First XVs but they don’t play each other often enough. So, some competition for them would be beneficial (outside the Top Four). The Hurricanes could start a girls rugby series like their boys festival counterparts for the traditional leading four to six teams. A national round-robin or league competition or challenge type series bringing in the likes of Southland to Christchurch to Hamilton Girls’ would be even better.

It is hoped that the national Top Four can resume in 2022 after a two-year hiatus due to Covid-19 (looking further afield, the Auckland 1A competition needs to catch a break as well). The question is, are any of Wellington’s teams capable of reaching this level? The First XV season now traditionally gets underway with the Hurricanes Festival series that brings the Wellington, Manawatu and Hawke’s Bay sides together so we should find out then. The two Hawke’s Bay powerhouses, Hastings BHS and Napier BHS, continue to set the benchmark in the Hurricanes region. Wellington has a competitive competition though, with the trio of Scots College, St Pat’s Silverstream and Wellington College locked in a ding-dong rivalry in 2021. St Pat’s Town have been underwhelming in recent seasons, while the youthful Rongotai College players will be a year older in 2022 and one or more of the Beard Trophy schools could surprise again.

On the subject of underwhelming, the Wellington Lions have worn this tag for far too long now. Yes, last year’s team was ‘young’ and yes if one or two results or key moments in matches had gone their way in 2021 things could have been different. But they ended the season as spectators as Waikato (whom they had had lost to after leading 34-8 at one stage) won the NPC title in their 100th year. The Lions last won the NPC in 2000 (not withstanding they should have won again in 2004, 2008 and 2013) so it is 22 years since they were last champions, and this is the longest streak in their 150-year history that they haven’t been official or unofficial top dog in NZ domestic rugby. Another aspect to the Lions is that supporter engagement appears to have completely fallen off a cliff with the older and non-Instagram generation, so a marketing priority should be how to bring these supporters back. Maybe engage more with other media organisations with marketable aims?

What is happening with the Silver Lake investment deal in New Zealand Rugby? The New Zealand Rugby Players’ Association put the brakes on this last year and in September a restructured proposal was presented to the provincial unions when it was outlined that Silver Lake would take a reduced 7.5 per cent stake ($262 million) in NZ Rugby’s commercial operations if the deal proceeds, down from 12.5 percent ($387.5 million). Given that this is the way to go in other sports – such as Silver Lake’s one third investment for $150 million in the A-league football competition – It seems this is not a question of if but when, so provincial unions and their administrators could have a big payday coming their way soon. Regardless, other funding models for the future could be looked at, such as public ownership or at least public voting rights on decisions made, even small ones that are not financially related. This is where the concept of fan tokens using blockchain technology comes in so here is hoping NZR is innovating behind the scenes.

Is the heat on the All Blacks this year and next, heading into the 2023 Rugby World Cup? There is a core group of senior guys not getting any younger and NZR have turned around and re-signed some of these guys for three and four more years. Sam Cane – four more years, what’s going on there? The All Blacks have also used 18 midfield combinations since the 2015 World Cup? Who’s the best pair? The coaches are also under pressure. Joe Schmidt is now coming in to help Foster, is this shades of Wylie-Hart 1991? Are odds of $3.75 for France to win 2023 Rugby World Cup a good bet?

How will social media continue to change the athlete/officialdom relationship? A number of All Blacks spoke about their desire to play league last year, with this sort of talk unheard of in the past? Players can control their message and reach a large audience now. What does that do to traditional media outlets?

Will we get some good sevens rugby in 2022? There could be one or two sevens tournaments coming up early in the New Year, so here is hoping. The College Sport Wellington Condor 7s tournament that is now a Labour Day Monday tradition was postponed to April this year. But it is hard to see how that will work with all teams and schools concentrating on getting their XVs programmes and campaigns up and running then. Moving to the end of the year, there were no American Ambassador’s club rugby tournaments in 2021, so we can hopefully look forward to this. Question for Petone. Do you hold the ‘Biel’ Cup in your cabinet? This was the original sevens tournament that was retired in 1935 and Petone were the last winners. Also, it would also be good to have a resumption of the National Provincial 7s tournaments at the end of the year.