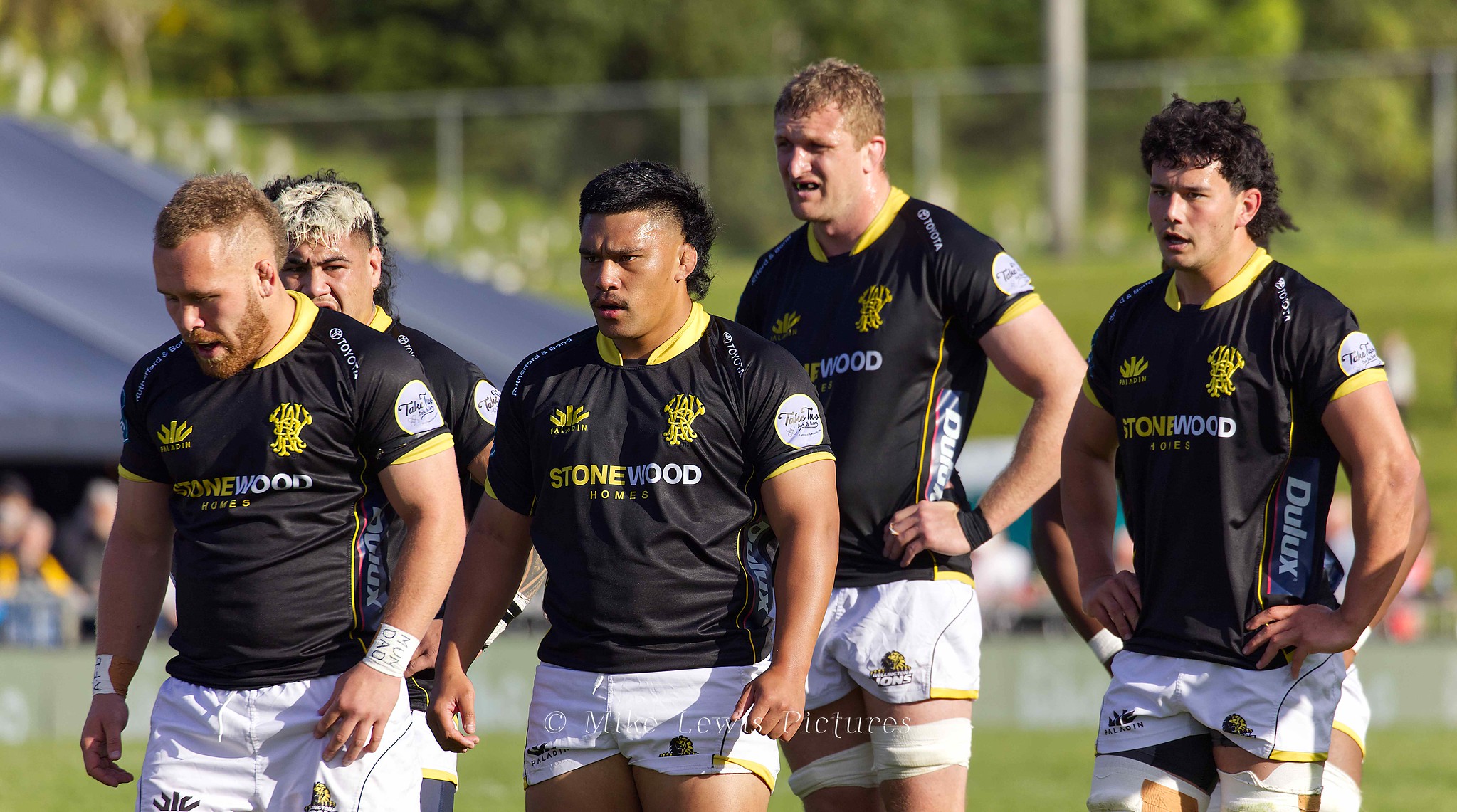 But not today. That tournament has been ‘postponed’ and the Hurricanes Schools 7s tournament previously scheduled for this coming Saturday has been called off. The upcoming WRFU tournaments scheduled for 6, 13 and 20 November could be on shaky ground as well – but are still on as we publish this.

They meet Otago in Dunedin for the Mike Gibson Memorial Trophy. Gibson was a popular centre and wing who played for both Wellington and Otago in the 1980s, before dying of Leukemia, aged 27. He played three seasons for Otago, and one full season in Wellington and for the Lions before cancer struck and he passed away the following year in 1988.The trophy in his name that was commissioned by his family was carved by Winiata Tapsell, a grandson of Winiata Tapsell who played for New Zealand Maori against the Springboks in 1921. Wellington won the inaugural Mike Gibson Memorial Trophy 27-11 in 1989.

The Wellington Lions beat the Southland Stags 24-22 on Saturday at Jerry Collins Stadium, but had to come from quite a long way behind. Fullback Aidan Morgan scored with 30 seconds to go in normal time, from a Wes Goosen grubber kick. Ruben Love converted for the win.

A well-deserved first-class debut for Peter Lakai (above), finishing a storming year for the industrious No. 8 from St Pat’s Silverstream and Petone, in which he made the NZ U20s and was a leading player in the Wellington U19s. He was on the field for almost half an hour but received few opportunities from his teammates on attack.

Perhaps a shame they couldn’t give Riley Higgins a run, choosing to select the veteran Julian Savea at centre when we all know what he can do at this level and higher. Higgins’ time will come, but, along with Lakai, this would be a good time to introduce him to higher honours.

On the subject of centres, any news on Billy Proctor? He was injured in pre-season.

Another impressive outing by PJ Sheck at tighthead prop. Here is an example of a player with an unheralded background who didn’t go to a ‘big’ rugby school (Porirua College), has played over 50 hard Premier club rugby games and captained Johnsonville and won a Jubilee Cup with Tawa – and he is only 21.

Taine Plumtree is another young-gun going well. He could kick on to become a key squad member of the Blues as soon as next season.

In the backs, Wes Goosen had another solid outing, Pepesana Patafilo continued his consistent form when he came on for the final 20 minutes, while Jackson Garden-Bachop (joining the blond bombers group) made a successful return from long-term injury.

Otago beat Canterbury 22-20 in the NPC on Friday night to achieve two victories in a row over Canterbury for the first time since the great 1998 NPC winning team. Otago beat Canterbury in 1998 41-23 and a year earlier 35-13 with Fijian international wing Manasa Bari scoring a hat-trick, though ironically Canterbury won the competition in 1997.

Hawke’s Bay are on fire, why haven’t they got more Hurricanes?

First five-eighth Lincoln McClutchie for one. The former Hastings Boys’ High School playmaker appears to have translated the  form that saw him lead his First XV to the national title a few years ago.

Taranaki beat Manawatu 47-35 to record their seventh win in a row. When they last won the Premiership in 2014, they also embarked on a run of seven consecutive wins which ended with a 26-23 loss to Canterbury after beating Wellington 38-22 – the Lions 10th loss in a row at that point.

🇺🇸 know how to hold events man. That was special to be a part of. Fed Ex & fans take a bow👏🏽🔥@skystadium surely we can do sme stuff 2 spice up rugby games😍.

Concerts b4 games – local artists perform, bbqs on the walk up 2 stadium for fans. If only🙃

Fans what ya think?🤞🏽

The gold-medal winning New Zealand Women’s sevens team has collected another piece of silverware, awarded the Best Female Team at the Tokyo Olympic Games at the ANOC Awards.

The ANOC (Association of National Olympic Committees) Awards recognise the best of the best, with the women’s sevens teams among the winners at the ceremony held in Crete, Greece.

Captain Sarah Hirini said the team was thrilled to accept the award.

“This is a huge honour for us. It was unreal to win that gold medal and this award just makes that campaign even more special.

“We’re really proud of our achievements and success over the last five years and we’re excited for what’s next,” said Hirini.

The team went through their Olympic campaign unbeaten, with wins against Kenya, Great Britain and the Russian Olympic Committee in pool play. A dramatic extra time victory over Fiji in the semi-final set up a gold medal match against France, New Zealand winning 26-12.

The Heartland Championship is heading towards the business end of the competition.

With two rounds to play, South Canterbury are unbeaten on maximum 30 points, with Thames Valley also unbeaten on 28 points.

Thames Valley’s 28-11 win over Horowhenua-Kapiti in Levin relegated the home team to seventh on the standings. Horowhenua-Kapiti are back home this coming Saturday to play Wairarapa-Bush who are languishing in 10th but coming off a win over King Country this weekend.

The Backstreet Boys smash hit “I want it that way” has had 992,173,867 views on You Tube. The Swampfoxes have adopted it as their team song.

A cameo off the bench from Hurricanes Heartland U20s and Paraparaumu centre Darren Falaniko, who latched on to a break by flanker Joel Winterburn and showed good pace and skill to score a popular and much needed at the time for his team try in the corner. This brought HK back to 11-18 as both sides wrung the changes. But a penalty and then try on fulltime sealed the game for the Thames Valley visitors.

The Thames Valley Swampfoxes had a Saturday morning warm-up outside Wellington’s swamp.

A romp for the All Blacks on Saturday.

Underwhelming introduction by the Sky commentators for new All Black Josh Lord, except for Karl Te Nana who acknowledged his father Matt. “He’s a bolter.” What about telling us Josh stands 2.02cm which ranks him in the top-10 tallest All Blacks ever. Josh was born in Ōwhango, the same place as the oldest living All Black, Roy Roper. Ōwhango, a town of 200 people situated 20 kilometres south of Taumarunui on State Highway 4! Typically, Tony Johnson is sharp on those things even “off tube’ in New Zealand.

Did Richie McCaw celebrate the 10th Anniversary of the 2011 World Cup win by spending an extra hour in the gym?

If the Wellington American Ambassadors tournament series doesn’t go ahead, does MSP’s three-year ban carry over?

The St Pat’s First XV has been underachieving these past couple of years – a couple of high profile appointments for next season:

Dhys Faleafaga (21) and Te Kura Ngata-Aerengamate (30) have celebrated birthdays on the Black Ferns tour of the UK.

The Black Ferns played two 60-minute warm up games on their Northern tour this morning. In game one they defeated England Under-20’s by 83-3 with Wellington wing Ayesha Leti-i’iga scoring four tries and Auckland first-five Patricia Maliepo contributing 23 points (try, 9 conversions). In the second game Wales were thrashed 53-7 with three tries to wing Portia Woodman and two for Renee Wickliffe highlights. Waikato’s Renee Holmes scored a try in both games and Wellington loose forward Dhys Faleafaga dotted down against Wales. In all the team scored 22 tries and kicked 18 conversions. Champion halfback Kendra Cocksedge was on target with five goals from eight attempts in the second match.

Some serious form shown by Tim Robinson at the start of the Wellington Club cricket season for Onslow. In two 20/20 fixtures he smashed 124 of 48 balls with 12 fours and 11 sixes and then made 111 off 46 balls with 4 fours and 14 sixes. Tim was a National age group Javelin champion and played some rugby in the winter at Wellington College and is often seen supporting First XV matches.

Kathy Flores (1955-2021) was a legendary USA women’s player and coach honoured before the All Blacks record 104-14 demolition of the USA Eagles at FedEx Field in Washington on October 24, 2021. She passed away with colon cancer on October 21 aged 66. Kathy was a woman of many “firsts.” She was the first woman to coach any national rugby team and the first woman of colour to coach a national team. She was the first captain of the USA in 1987 and was a member of the first 1991 World Cup Team, leading her side to victory. Her career began in 1978 as a player at Florida State University where she captained and coached the team to four national championship titles. In 1985, she was a member of the grassroots-organized, invitational women’s national team, the first US women’s team to play international matches. Following that she was a member of the first official USA team until 1994. From 1994-2010 she coached the University of Berkeley to 11 NCAA National Championships. She was the national coach between 2003 and 2010 and in 2009 helped create the US Women’s Premier League.

A fuore in the media on Monday morning about an Amerian Eagle’s supposedly disrespectful reaction to the All Blacks haka in their match this weekend.

This column is a collaborative effort by Club Rugby contributors – to assist us with news and information or club or team notices please email editor@clubrugby.co.nz