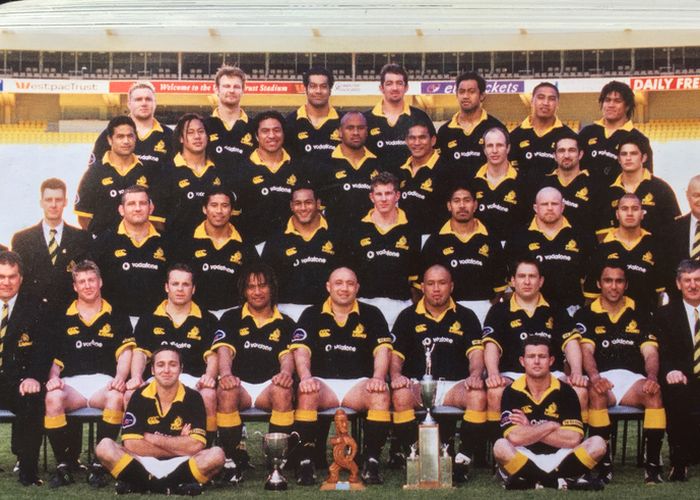 Unlike those previous three winning seasons, and most recently 1986 when they won every game (albeit no finals series), their campaign in 2000 was a rocky road and it actually had similarities to this current one in 2021 (although this year’s winner will be an asterisk champion with the three pestilence-affected provinces having withdrawn).

On paper the 2000 Lions had the hallmarks of a champion team, including the most potent back three in world provincial rugby at the time – in wings Tana Umaga, Jonah Lomu and fullback Christian Cullen.

This trio were backed up by the classy Alama Ieremia-Jason O’Halloran midfield combination and reliable insides Jason Spice and David Holwell.

Captain Norm Hewitt led a tight-five comprising locks Dion Waller and Inoke Afeaki and imported props Morne van der Merwe and Kevin Yates, while there was a healthy mix of experience and youth in the loose between veterans Filo Tiatia and Kupu Vanisi, and young guns Rodney So’oialo and Jerry Collins.

With such a dynamic side to put out on the park, Wellington had been struggling to show their true colours. Three losses in four games, culminating in a misfiring 7-24 defeat to North Harbour during the middle weeks of the round-robin, convinced many long-term supporters that once again this was not going to be their year.

However, the North Harbour loss proved a turning point in the 2000 campaign, heralding a noticeable change in attitude and change in style. The team suddenly broke the shackles and started playing free-spirited running rugby, a move that ushered in immediate success over the following weeks and brought bonus point wins over Counties Manukau (45-29), Southland (28-21) and Waikato (48-23), and earned them an Eden Park semi-final showdown with Auckland.

The outside backs came out to play against Auckland, with Cullen (2), Lomu, Brad Fleming and Umaga – now playing at centre in place of an injured Ieremia – combining for the Lions’ five tries in a comfortable 48-23 rout. Though not affecting the result, Fleming’s try was long remembered as a controversial one for the TMO awarding it when it was clear he had knocked on over the line.

From there it was on to Christchurch to contest their second successive final after missing out to Auckland 18-24 the previous year, where their fans now had every reason for optimism that they would go one better. Their confidence was soon realised when Lomu ran on to an O’Halloran kick and chase and Holwell converted for a 7-0 lead. The big winger scored again after a rampaging 50-metre run up the touchline in which he nonchalantly swatted off Fijian international defender Marika Vunibaka. O’Halloran and Afeaki added their names to the score sheet as the Lions held a seemingly match winning 34-15 lead midway through the second half. This lead could have been greater still, with video replays confirming that Cullen had scored two separate tries but neither were followed through by referee Paul Honiss for closer inspection.

But the home side had other ideas and came storming back into the contest over the final quarter to trail by just five points at the business end of the match. Waller was sinbinned for Wellington and the Lions were left grateful that they had finished with their line intact after waves of concerted Canterbury attack and amidst calls for a penalty try with a minute remaining.

Fresh controversy surrounded Hewitt after the game for allegedly setting a bad example when he revealed he had played much of the second half with a broken arm, refusing to leave the field and instead moving to prop with four out of five of Wellington’s front rowers injured during the game.

Much of the above article was first written for a Wellington Lions match-day programme in 2008.

Wellington Lions to play for Ranfurly Shield on Sunday