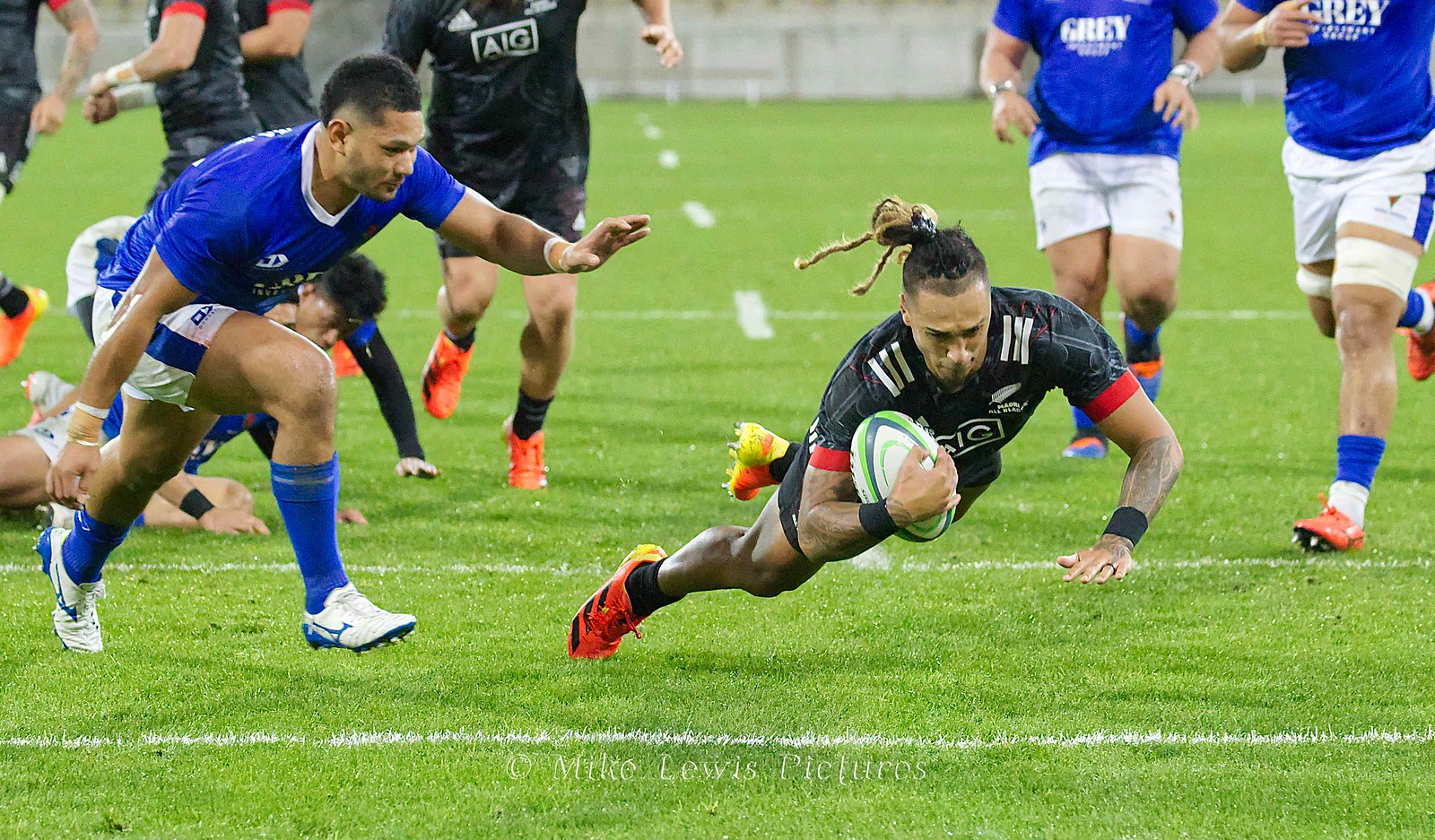 Chiefs, Bay of Plenty and Māori All Blacks back Sean Wainui (above) died in a car crash in Omanawa, near Tauranga, on Monday morning. Wainui played 53 games for Taranaki before shifting to Bay of Plenty this year. He also played 44 games for the Chiefs, nine for the Crusaders and represented New Zealand Māori since 2015.

Late last week the WRFU confirmed that the 2021 Club Sevens programme will go ahead in November 2021 (subject to the latest Government guidelines). Three tournaments (plus a reserve day) below:

Sport NZ updated their advice around gathering sizes for community sport late last week on Friday evening:  https://sportnz.org.nz/about/news-and-media/news-updates/covid-19-sector-update-15-october/.  In short, community sport events are back to being limited to 100 persons in total.

In regards to the Wellington Secondary School Sevens Rugby Tournament, unless the Government announces this afternoon that Wellington is moving to Alert Level 1 this week, the event will be postponed (Date TBC).

College Sport Wellington will make a statement about term 4 sport competitions and events later this afternoon, after the Government’s press conference.

The Hurricanes Youth Rugby Council have stated that the HYRC 7s tournament scheduled for Masterton on Saturday 30 October will only go ahead if we are in Alert Level 1 – as previously stated.

Chiefs, Bay of Plenty and Māori All Blacks back Sean Wainui died in a car crash in Omanawa, near Tauranga, on Monday morning. Wainui played 53 games for Taranaki before shifting to Bay of Plenty this year. He also played 44 games for the Chiefs, nine for the Crusaders and represented New Zealand Māori since 2015.

This coming Saturday, the Wellington Lions play the Southland Stags at Porirua Park in a non-competition match at 4.35pm. The following week they meet Otago in Dunedin in another non-competition match. The Lions are currently second equal on the table with Waikato, but will likely get leapfrogged in the next fortnight by Canterbury and/or Tasman.

A season best performance by the Wellington Lions this past Saturday, accounting for Manawatu 36-16 in Palmerston North. Wellington never looked like losing the Coronation Cup. A Strong display by Taine Plumtree, and is Peter Umaga-Jensen in line for an All Blacks recall?  What does Quinn Tupaea offer Peter doesn’t?

Aidan Morgan, Pepesana Patafilo and Wes Goosen also played well in the backs, as did Ruben Love who is coming back into form with a good game off the kicking tee at a ground he is familiar with and scoring a good late try:

A statistic that came up on the screen in a previous match before the Lions-Manawatu game was that at that point the  two players who were leading the turnover stats this year were Northern United’s Du’Plessis Kirifi (14), and OBU’s Shamus Hurley-Langton (10). Would be interesting to see these updated after their head-to-head game on Saturday.

A debut off the bench for Waikato for Tom Martin (Marist St Pat’s) on Saturday against Taranaki.

The Avalon Wolves missed out 22-10 to the Carisbrook Bush Pigs in a typically fast-paced U85kg match on Saturday. With the other side of the draw yet to progress past the the quarter-final stage owing to lockdowns in the Waikato, it is unclear who against, when and where the Dunedin side will contest the final.

Wolves No. 8 Scott Waldrom played his last game for Avalon. Does anyone really believe that? Fit as a racehorse and still effective.

In the 11th year of the split-division format, Taranaki became the first ever Championship team to win all four of their crossover matches against Premiership rivals in the one season. On Saturday they beat Waikato 33-26. Coach Neil Barnes pointed out Ranfurly Shield holders Hawke’s Bay were essentially eighth in 2020 despite being one of the best teams in the country. Think he has a point when he suggests a reformat.

South Canterbury and Thames Valley unbeaten after five games in the Heartland Championship. If they stay that way they will meet in the final in three weeks time. If not it’s possible they will avoid playing each other altogether which is a shame.

Ma’a Nonu rode out of Ruatoria on a horse on Saturday:

Oriental-Rongotai’s Nonu started on the bench, alongside Northern United’s Faifili Levave and former HOBM wing Hosea Gear, who is also the head coach. But neither were influential, as Ngāti Porou East Coast jumped out to a big lead and were ahead 24-5 at halftime. They beat Buller 50-26. This snapped their 54-game (2940 day) losing streak in the Heartland Championship. Their last win prior to the weekend was in 2013 against North Otago. Furthermore The Ngati Porou East Coast women beat the Eastern Bay of Plenty-Muriwai Maidens 26-20 in Kahuitara. Here are some examples of famous losing streaks in sport.

Staying with the Heartland Championship, the leading Hurricanes side is Whanganui who are sitting in third behind leaders South Canterbury following their 40-15 win over Heartland neighbours Horowhenua-Kapiti on Saturday. H-K lead 15-14 at halftime, but two tries to recent Whanganui Collegiate No.8 Semi Vodosese sealed the deal. H-K are still fourth despite their loss.

‘Porirua‘ or ‘Lower Hutt‘ to join the Heartland Championship?

Moana Pasifika are starting to build their squad. They have former Wallaby Christian Leali’ifano, Canterbury halfback Ere Enari, Auckland lock/flanker Sione Tu’ipulotu and Hawke’s Bay flanker Solomone Funaki on their books already. Which other local players will they contract?

Has Ardie Savea re-signed with the Hurricanes for 2022 yet?

Can we please watch rugby without being reminded to vaccinate? If they’re so keen for people to vaccinate why not set up a station outside the ground and those with a second shot can go inside and watch the game instead of being kept out.

More talk last week of the Wellington Orcas rugby league team getting off the ground and joining the NRL at some point in the future. How would this affect the talent pool of local club/league players in Wellington (see section immediately below)? Particularly with no school rugby league competition to speak of and a wafer thin club competition.

On Aug. 14, 2021, a small near-Earth asteroid (NEA) designated 2021 PJ1 passed our planet at a distance of over 1 million miles (about 1.7 million kilometres). Between 65 and 100 feet (20 and 30 metres) wide, the recently discovered asteroid wasn’t a threat to Earth. But this asteroid’s approach was historic, marking the 1,000th NEA to be observed by planetary radar in just over 50 years. Read more HERE

Last Tuesday, the four weakest performing Wellington Premier clubs as a weighted average over the past three years also dodged oblivion, or at least major setbacks to their future Jubilee Cup winning hopes and dreams, when the region’s 20 Clubs and affiliated bodies voted to retain this year’s Premier Men’s competition format for the next three years.

The Avalon Wolves, Johnsonville Hawks, Paremata-Plimmerton Hammerheads and the Wellington Axemen will take their seats at the 14-team first round Swindale Shield table in 2022, 2023 and 2024, when a 10-team competition not involving these clubs was voted down by a margin of 10-1-7 of votes cast.

The format for these next three seasons will remain the same as this year; a full 13-round Swindale Shield and then quarter-finals, semi-finals and finals for the Jubilee Cup and Hardham Cup. Club Rugby cannot help but think that a trick has been missed by not at least having a full, extended Jubilee Cup round. With some marketing, promotion and perhaps some sponsorship, a full two-month Jubilee Cup could bring back enthusiasm and increased wider interest. A three-week Jubilee Cup is not going to do this.

Also confirmed was the eligibility criteria for clubs to participate in the Premier Men’s grade. In a return to pre-COVID times, clubs will be required to field a Premier Men’s, Premier 2 Men’s and Under 21 team. This could prove problematic for a couple of clubs, but maybe natural attrition is what is needed to achieve a future full-term Jubilee Cup competition?

This is bad for local sport, very bad: https://www.stuff.co.nz/national/126663641/pokie-machine-sinking-lid-on-the-table-as-lower-hutt-reviews-gambling

A leading group of New Zealand’s emerging women players have been identified and selected for a High Performance Development camp. The programme will see 42 of the most talented young players come together for a position specific workshop with leading coaches from across the country. Players have been selected from school, club and Farah Palmer Cup rugby and represent 11 Provincial Unions.The camp was scheduled to be held in Hamilton this month but has been postponed due to Covid19 restrictions. It will take place early next year.

Former All Black Carlos Spencer has revealed that he is to join up with NOLA Gold in 2022. The New Orleans team wasn’t flash in Major League Rugby last season but they will almost certainly win the aftermatch. Why Spencer was suddenly cut from the Hurricanes coaching staff was a question that was ever adequately answered.

Welshman Gareth Baber has stood down as coach of the Fiji Sevens team. He took charge of the team at the start of 2017 and guided Fiji to the World Series title in 2018/19, a Commonwealth Games silver medal on the Gold Coast and Olympic gold in Tokyo. Englishmen Ben Ryan had the gig before Baber. Who and where is the next Fiji Sevens coach?

England women’s rugby has received a further boost to its profile with confirmation that the Red Roses’ autumn Tests will be broadcast live on terrestrial television. BBC Two is set to screen all four games in prime Sunday afternoon slots, including two tests against the Black Ferns. England named their 40-strong squad for the upcoming Tests against New Zealand , USA and Canada and the most notable absence was the outstanding Emily Scarratt, currently recovering from a broken leg. The captain, Sarah Hunter, has played 126 tests. New Zealand will play their 100th test overall against England in Exeter on November 1 (3:30am, NZ time). England has 11 new caps, the Black Ferns 12 in their 34-strong touring party.

In New Zealand, the All Blacks and Black Ferns are hidden behind the paywall that is Sky TV. As interest in the All Blacks has waned in New Zealand society in recent years, wouldn’t the NZRU be prudent to put them on old-school TV too?

A call to anyone who would be interested in helping the Community Rugby Trust, though Club Rugby start a live-streaming service next year. Please get in touch! This would be live and free on our channels. More so than professional rugby, you can’t have community sport behind paywalls.

To contribute to this column, or to send us news and information, please email editor@clubrugby.co.nz