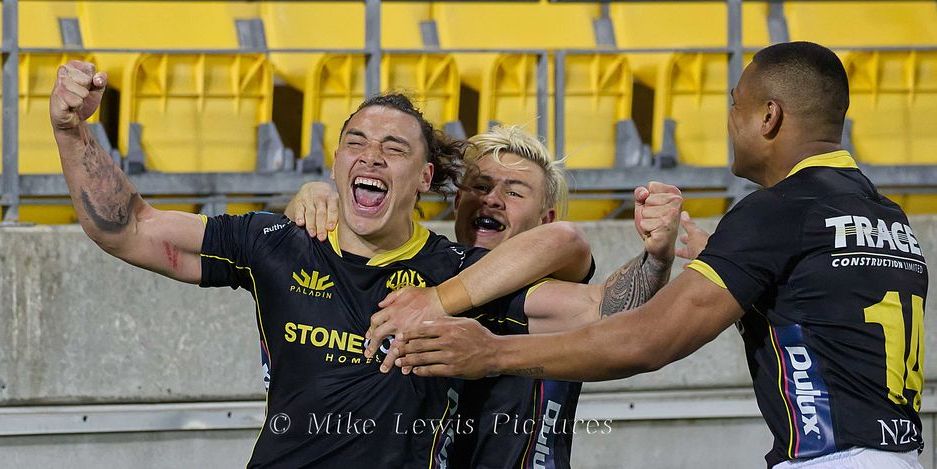 The end of the community 15s season is all-but over.

Just waiting for details of a potential U85kg Knockout Cup semi-final this Saturday between the Avalon Wolves and the Carisbrook Bush Pigs – which will either be in Dunedin or Lower Hutt.

The other semi-final is scheduled to be between Morrinsville (Waikato) and either Fraser Tech (Waikato) or Tukapa (Taranaki) – who were scheduled to play on Saturday in Hamilton.

A corkscrew roller-coaster for Wellington Lions supporters on Friday night.

The Lions beat Canterbury 35-30 in extra time, reversing an extra time loss they suffered last year. Wellington was near faultless in the first 15 minutes, leading by 17-0 but lost the next hour 30-6. The rally at the end was commendable but the Lions inconsistency is infuriating and hard to explain when you look at the number of Super Rugby players on the roster.

This coming Saturday night they are scheduled to play the Manawatu Turbos in Palmerston North. The Coronation Cup was presented in the Queen’s coronation year of 1953 and for many seasons the two unions played an annual Queen’s Birthday fixture. The Turbos are coming off a solid 38-27 win over the Stags in Invercargill.

Confirmation that should we be in the current AL2 Covid-19 level with the most recent rules around a loosening on group gathering restrictions, the Wellington Condor 7s tournament will go ahead. The Condors are down for Naenae College on Labour Day Monday (the 25th). There is also the Hurricanes Schools 7s tournament set for Masterton on Saturday the 30th, which is unconfirmed. Three WRFU tournaments to follow in November, which are also unconfirmed.

Rugby coaching opportunities in the Bay of Plenty:

Patafilo, 25, is a newer addition to Super Rugby, having debuted against the Highlanders in early 2021, whilst 26-year-old Garden-Bachop came on to the Hurricanes scene in 2018 when he made his debut against the Jaguares in Argentina.  The former is currently playing a wholesome role in the Wellington Lions NPC campaign and the latter is rehabbing from a knee injury.

On the departure front, the Manawatū Turbos have released prop Tietie Tuimauga from his contract for the remainder of the NPC. The 28-year-old Samoan international who played for Johnsonville in Wellington and latterly for the champion Feilding Yellows side,  has signed a deal with Irish side Connacht.

Vince Aso played his last game for Wellington on Friday. A 2016 Super Rugby champion with the Hurricanes, the Auckland born outside back was equally comfortable on the wing or in midfield. Strong, consistent, versatile and affable off the field, Vince will be sorely missed. A really solid pro.

The three provincial unions that have withdrawn from the NPC are Auckland, North Harbour and Counties Manukau. Waikato and Northland got ahead of the curve, but these lockdowns are a moving feast. If nothing else, they shouldn’t have promotion-relegation this year.

Auckland, Counties-Manukau and North Harbour can’t rejoin the NPC with every provision put in place to protect teams from Covid-19, yet thousands can attend a Brian Tamaki rally in Lockdown and go unpunished. That’s BS!

Rangitukia is located 26 kilometres north-east of Ruatoria and only 14 kilometres (as the crow flies) from the most eastern point of New Zealand, East Cape lighthouse. Last Wednesday,  Rangitukia hosted the Division B match for the Hurricanes region U16 competition Saracens Cup  between Ngati Porou East Coast and Hawke’s Bay Development. The match was played at George Nepia Memorial Park, the home ground of the Waiapu Rugby Sub-Union. George played for the Rangers Waiapu RFC. Read Touchline’s full story HERE

Club Rugby understands that a meeting is taking place this Tuesday to vote on the future structure of Premier Wellington club rugby, with a handful of options on the table, from retaining the year’s status quo, to further tweaks, to more radical changes. Watch this space.

As seen on the Twitter the other day, some colour footage of the 1924-25 Invincibles All Blacks:

On the subject of Bert Cooke (see video above), a couple of young centres to look out for in the future in the two Wellington U16 teams. Wellington College’s Jacob Kennedy in the Gold team and St Pat’s Town’s Jack Su’a in the Black team both caught our attention in recent games.

Hawke’s Bay have now defended the Ranfurly Shield eight times and scored 34 points in three of those defences.

Hawke’s Bay had lost eight matches on the trot to Tasman who have lost all three of their Ranfurly Shield challenges since they were founded in 2006. Hooker Quentin MacDonald is the only player to have featured in all three challenges, although coach Andrew Goodman also played in the 26-20 defeat to Wellington in 2008, and the 49-40 loss to Taranaki in 2012.

Referee Dan Mangin had his pager in his pocket whilst refereeing the Centurions Development v Hawke’s Bay Development match on Saturday, waiting for the call-up to hand his whistle to one of assistant referees and join his wife due to give birth. Luckily it didn’t go off, but the next generation of referees could have entered the world by the time this article is published!

"You shall not pass!" – Sam Underhill ⛔️ pic.twitter.com/O8bNvTRHkE

Is it confirmed that Tyrone Thompson is going to the Chiefs next year?

Ricky Riccitelli to the Blues?

New Zealand Rugby (NZR) last week announced a partnership with Taisho Pharmaceutical (Taisho) as Premium Global Partner from 2022 onwards. Taisho, a leading Japanese Pharmaceuticals company has agreed to a six-year partnership to become a Global Partner to the All Blacks, Black Ferns, and the Official Sponsor in New Zealand and Japan of the Rugby World Cup 2021 (played in 2022). Lipovitan-D – one of Taisho’s original products – from 2022 will also become the Official Title Partner for the Rugby Championship. The partnership is testament to strong rugby ties between Japan and New Zealand, with Taisho also the major partner to Japan’s national team. Both parties share an interest in growing rugby participation and fan engagement, while Taisho sees this partnership with NZR as an opportunity to promote the development of rugby in Japan.

Chyna Hohepa (sister of the great Black Fern Carla Hopepa) was captain of Waikato when they won the Farah Palmer Cup for the first time beating Canterbury 22-20 in the final at Rugby Park, Christchurch on Saturday. It was a remarkable success for Waikato who waited 48 days between a 34-27 win over Wellington on August 15 and a 26-10 semi-final triumph against the same side on October 1. Covid-19 then forced the team to scramble from Hamilton to Cambridge on October 3 to avoid being locked down in Level 3. On October 6, Cambridge was locked down – Waikato escaping to Christchurch before the midnight deadline. The final itself saw Waikato, without nine Black Ferns, rally from 3-13 down at halftime and snap Canterbury’s 27-game, three-year, win streak in a classic display of forward power and using a stiff wind. Prop Awhina Tangen-Wainohu, hooker Mereania Paraone and No.8 Victoria Edmonds scored tries. Edmonds’ try was fitting as she became the first Waikato female to play 50 matches for the Union on the occasion of its 100th Anniversary. The A student and police officer returned to rugby in 2021 to honour the passing of her grandfather.

Canterbury openside Jorja Miller made 16 tackles in the FPC final and won multiple turnovers. The Year 13 at Christchurch Girls’ High School is really one to watch!

There were close to 40 penalties blown in the FPC final, but it didn’t feel like that because of a number of quick taps that kept the game moving. How about an ELV which grades the severity of penalties removing certain options if the penalty is only minor. For example a hands in the ruck or not rolling away penalty can only result in a quick tap instead of a kick or set-piece for the team that has possession. The referee of course will retain the option to bin repeat offenders. More serious penalties would result in usual choices and sanctions. No shots at goal outside 30-metres would be another way to speed the game up.

Canada will not be at the Rugby World Cup for the first time ever after they were beaten by Chile 33-24 in Valparaiso. Canada won the first leg of the qualifying series 22-21 but were well beaten by Los Condores in the second tie. Uruguay beat the USA 34-15 to secure their place at the World Cup for the fifth time. They will join New Zealand, France and Italy in Pool A in 2023.

World Rugby confirmed that the misconduct hearings into the Rassie Erasmus misconduct hearings will take place over the weekend of October 30-31. The hearings will be chaired by Independent Judicial Panel Chairman Christopher Quinlan QC and the panel will include Nigel Hampton QC and Judge Mike Mika, both of New Zealand. Erasmus used 26 video clips to criticise the match officials after the defeat in Cape Town. Were the issues raised by Erasmus valid? If so, what would be a better process to critique referees or how could existing systems be improved? If Erasmus’ conduct was beyond the pale what would be a sufficient penalty? How is such behaviour avoidable?

A number of former Wellington/Hurricanes players in the Northhampton-Wasps match yesterday.

After falling short 21-16 to the undefeated Leicester Tigers in the latest round of the Gallagher Premiership, the Exiles’ winless streak continued.

London Irish haven’t won a game yet this season, losing three and drawing one, continuing a 10-game winless streak extending back to last season. The loss lead head coach Len Kiss to admit the squad was ‘the most despondent we’ve been’ after a game this season.

Good to see Sam Cane donning the maroon and playing for King Country this past weekend. When was the last time a current All Black played an amateur first-class representative game?

Turnover of the Week: Luca Rees for the Centurions versus Hawke’s Bay Development: