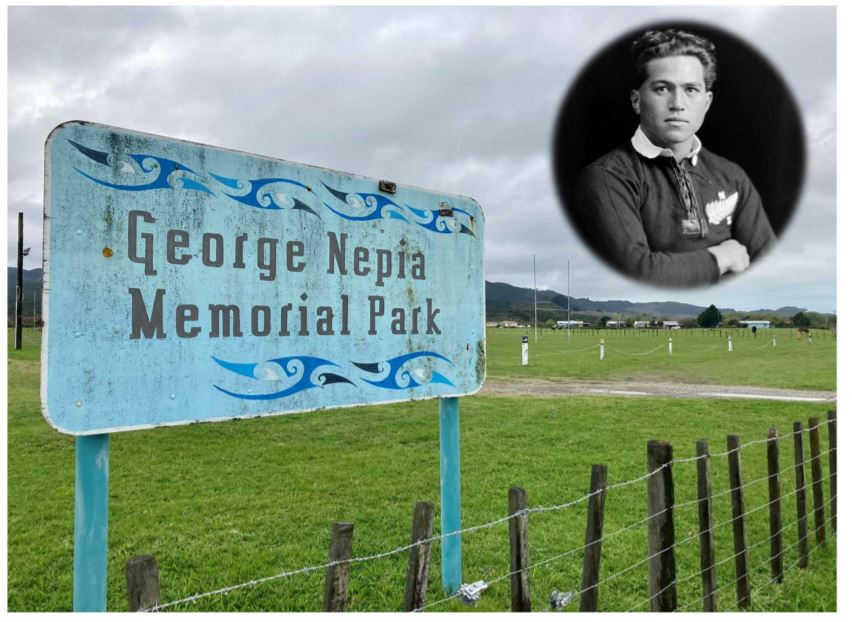 The urupa at St. John’s Maori Church in Rangitukia (consecrated on Easter Sunday 1901, on the site of an earlier 1842 Anglican Mission Station), contains the memorials of the Nepia and Kohere families. While George Nepia was originally from Nuhaka (near Wairoa) and played his early rugby for Hawkes Bay, following his marriage to Huinga Kohere of Rangitukia on 6 May 1926, his rugby loyalty moved permanently to the East Coast region, where he first donned the blue and white jersey of the RangersRugby Football Club, also becoming the sole selector for the Waiapu Sub-Union.

Rangers RFC, based in Rangitukia, was formed in the 1920’s and most likely derived its name from the “Forest Rangers” who fought the Hauhau of Te Kooti during the New Zealand Wars of the 1860’s. Under the influence of Nepia at the club in that early era, at least five players were selected for the Maori All Blacks in the 1930’s, during which time the Rangers boasted two senior teams.

The “tyranny of distance” has always been a challenge for rugby union players from the East Coast. Rangitukia is located 26 kilometres north-east of Ruatoria and only 14 kilometres (“as the crow flies”) from the most eastern point of New Zealand, East Cape Lighthouse. In 1930, Nepia was reported to have travelled some 2,000 miles (3,200 kilometres) in seven days to meet his local and national rugby obligations as an amateur player. It is worth recalling the odyssey he made.

On Wednesday 11 June, Nepia travelled to Wellington for the final All Blacks trial, returning to Gisborne at 1.30am on the Friday, leaving for Rangitukia at 8.00am and playing for Tikitiki against Tolaga Bay the following day.

Following Saturday’s match, George returned to Rangitukia (across a flooded river), arriving home at 6.00am on the Sunday morning. He then left for Wellington later the same day to join the All Blacks in Oamaru, arriving around lunchtime on the Tuesday (via Wellington and Lyttleton), to play North Otago on Wednesday (18 June), before playing in the first Test match against the touring British Isles side in Dunedin on the Saturday of that week. The Test match was played in driving snow, (and also featured the first live radio broadcast of an international game in New Zealand).

While 1930 was the final year in which Nepia represented New Zealand (following his debut in 1924-1925 for “the All Black Invincibles”), 17 years later in 1947 (as a 42-year old), he was still playing club rugby for his local team and was reported to have played “a grand game at second five-eighths”, defending the Duff Cup against the City club from neighbouring Ruatoria. In 1950, Nepia captained the Olympian rugby fifteen against the Poverty Bay representative side (captained by his eldest son George), with the Olympians winning the match by 17 points to 11.

Following his playing days, George Nepia became a rugby referee (to a Provincial Union representative level) and for many years took a keen interest in coaching the rugby rangatahi of the Waiapu Sub-Union. George Nepia Memorial Park (also known as “Papatakaro Rangitukia” and “Windy Park”), continues to be the home ground of the Waiapu Rugby Sub-Union and symbolises the essence of what is often referred to
as “grassroots rugby” in this country.

On Wednesday last week, the ground hosted the Division B match of the Under 16 Saracens Cup between Ngati Porou East Coast RFU and the Hawkes Bay RFU’s development team, a fact that in the Union’s centenary year and 35 years following his death, George Nepia would no doubt have been very proud.

The Hawke’s Bay visitors were hosted by nearby Hinepare Marae which recently celebrated its 75th anniversary following the opening of its memorial Dining Hall by then Finance Minister, Walter Nash in 1945. While the East Coast team were unsuccessful in defeating their southern eastern coast visitors, the match was a true celebration of the essence of rugby union as part of the community.

George and his wife Huinga were farmers in Rangitukia before moving to the Wairarapa in the 1960’s. In Masterton, George worked for HMV-Norge Manufacturing (who manufactured fridges, freezers, clothes driers and washing machines), before returning to Ruatoria following his wife’s death in 1977, to live with his son Winston. The eternal referee blew the full-time whistle on George Nepia’s illustrious life, in 1986

The belief is as dangerous as the actuality