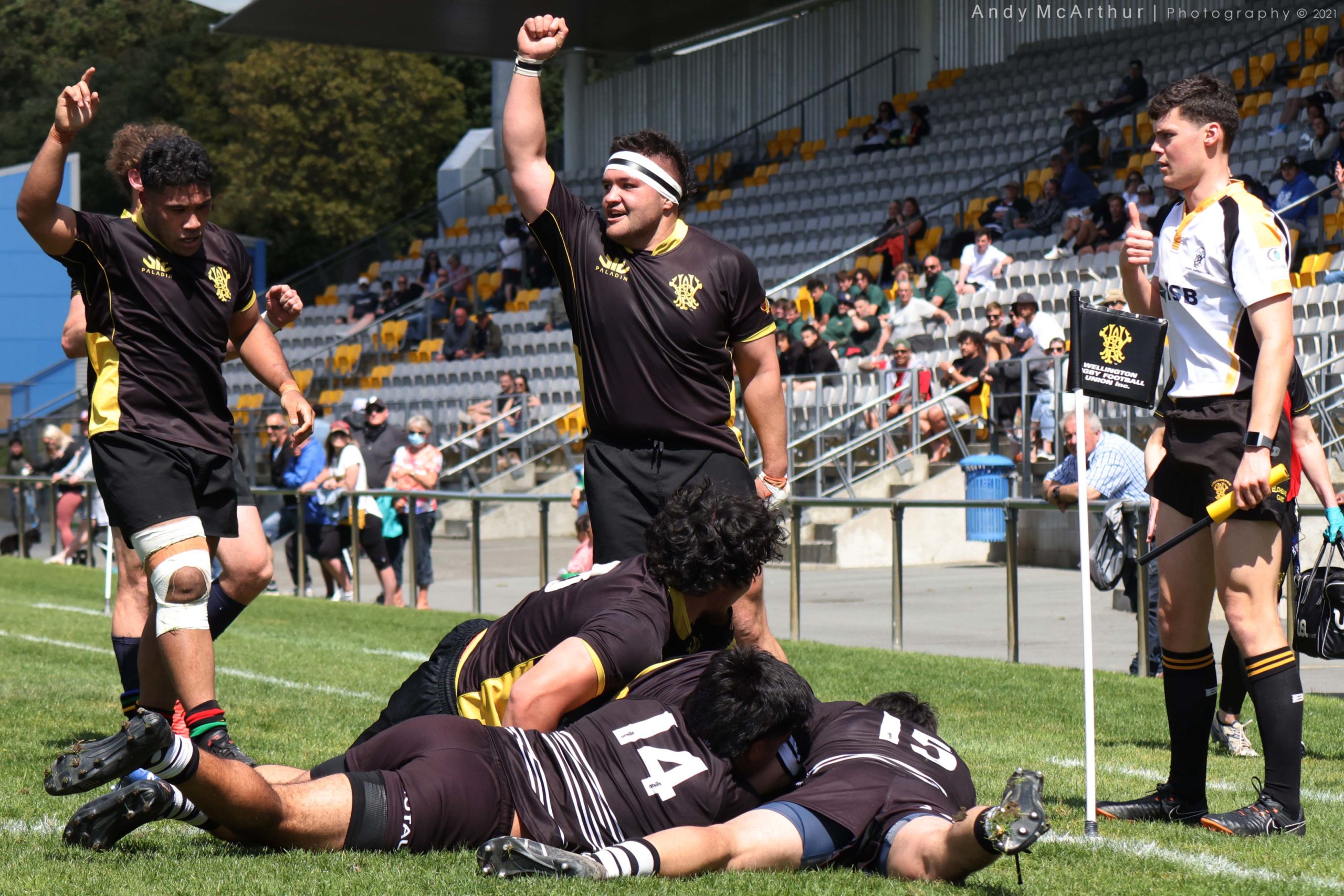 Unbeaten seasons for the Centurions Wellington Development Men’s team and Wellington U19s side, as the Hurricanes Youth Rugby Council’s age-grade competitions finish, and the Upper Hutt Rams U85kgs miss out in Dunedin in the U85kg Knockout competition.

Hawke’s Bay (Division A) and Wellington Gold (Division B) won the Hurricanes Youth Rugby Council’s U16 tournament in the two finals at Palmerston North today.

Hawke’s Bay beat Manawatu 28-26 in a thriller for the Don Broughton Shield – coming back from 26-7 down in the final 15 minutes to win with a late converted try.

Wellington Gold captured the Saracens Cup with a 36-5 win over Poverty Bay, after leading 26-0 at halftime.

The Wellington Black U16s finished third in the A Division of the U16 tournament, beating Wairarapa-Bush 55-17 in the third-fourth placed match at Porirua Park this afternoon.

Wellington Black out-scored Wairarapa-Bush nine tries to three and had the game sewn up when leading 31-0 at halftime.

Wellington were fast out of the sheds and scored three early tries, the first one to hooker Noah Kalolo and the next two to openside flanker Simati Leala, and then added a fourth to lock Tom Devery after a sweeping breakout to go 26-0 up. They scored again right on halftime through halfback Thoma Takeuchi darting from an attacking scrum and then ran in two soft tries to No. 8 Brayden Soi and centre Jack Su’a early in the second half to go 43-0 up.

Wairarapa-Bush rallied and got themselves back into the game, their openside flanker and No. 8 both leading the way. They scored the game’s next two tries, closing the gap to 43-12.

Wellington found a second wind and passed the half century with two more tries, to halfback Takeuchi and lock Maddox Jacobs, but Wairarapa-Bush finished strongly and scored the game’s final try from a close-range rumble.

In the other U16 Division B final match fixtures this afternoon, Hawke’s Bay Development finished third with a 41-22 win over Horowhenua-Kapiti and Whanganui beat Ngati Porou East Coast 34-10 to finish fourth.

The Samoan U18 Girls beat the Centurions U18 Girls 33-15 on the top field at Porirua Park. Final wrap of the HYRC’s U18 Girls competition pending.

At Lyndhurst Park, the Wellington U19s completed an unbeaten 2021 campaign with a 58-24 win over Whanganui B.

The U19s made some changes to the team that won the Hurricanes U19 competition, including resting Riley Higgins and Peter Lakai. They met a competitive Whanganui side and led 33-17 at the end of a lively first half.

They pulled away in the second half, the U19s’ superior skill and fitness levels proving telling.

The Wellington Centurions Development Side beat the Hawke’s Bay Development team 28-20 in a tight tussle in glorious spring conditions in the first match at Porirua Park this afternoon.

The match was on tenterhooks until the final 10 minutes when a Wellington break-out led to their match-winning try to left wing Ethan Webster-Nonu off an attacking scrum. Fullback Sam Reid kicked the sideline conversion and added a late penalty to give Wellington breathing space at 28-13 ahead.

Hawke’s Bay deservedly scored a consolation try near the end of the game with a break-out from 50 metres to replacement loose forward Will Tremain.

Prior to Webster-Nonu’s match-winning try, Wellington were barely clinging on to an 18-13 lead, which had been the halftime score.

Much of the second half had been a morass of missed opportunities by both teams. The two aspects that haunted Hawkes Bay’s performance throughout, their misfiring lineout and too many turnovers at the breakdown, counted against them when they should have finished off a period of pressure to score a try which would have made it 18-18 with the kick to come. However, a Wellington turnover and clearance, and then a lineout steal started the build-up to the winning try.

Wellington had led three tries to one at the break, playing into a dying northerly wind, with second five Brandyn Laursen breaking a 13-13 deadlock on halftime to score.

Earlier, Hawkes Bay had made a rollicking start when centre Zach Simpson ran back a kick and linked up with lock Josh Greening who passed to right wing Dennon Robinson for the game’s first seven pointer.

Reid, the Nairnville Park Express, opened Wellington’s account with a penalty but Hawke’s Bay first five Tianua Poto replied in kind and the visitors led 10-3 midway through the first half.

Wellington replied with their opening try of the match, some long phase play inside Hawke’s Bay territory rewarded when Wellington won a penalty from a scrum and halfback Campbell Woodmass scored several phases later after a lineout in the corner.

Hawkes Bay’s Poto increased his team’s lead with a penalty to make it 13-8 after half an hour before Wellington struck with their second try to lock it up at 13-13. This involved Woodmass, Laursen and lock Akira Ieremia in the build-up, and tighthead prop and late replacement into the team, James Coburn, scoring in the corner.

Wellington missed two chances to extend their lead early in the second half, centre Losi Filipo’s kick and chase into the in-goal a couple of bounces too long, followed by Coburn spilling the ball forward with the try line open.

Visitors Hawke’s Bay re-grouped and they too had their moments, their best chance in the middle stages of the second half being thwarted by a defensive turnover under the posts by Wellington blindside flanker Josh To’omaga and, not for the first time in the half, Wellington cleared the danger.

Thus ends the short representative season for both teams, the Centurions finishing their campaign unbeaten in six represntative matches.

The Upper Hutt Rams‘ bid to win the National 85s Club Cup came to an end this afternoon at a damp and misty Logan Park in Dunedin 41-16 by the home Carisbrook Bush Pigs.

The Rams made a bright start, leading 9-3 nearing the break after an exchange of penalties. But they conceded on both sides of half-time, the first from close range and the second after a poor pass in midfield that along with a penalty had the hosts up 20-9. The Rams eventually crossed through Scott Svenson after some interplay with fellow Premier regular Tynan Barrett to close the margin to 16-20, but the Pigs kicked away with three converted tries in the final eight minutes to blow the scoreline out.

The result leaves the Avalon Wolves as the last Wellington team standing after Poneke exited last week, and the Wolves will face the Bush Pigs in what will now be a semi-final after the Auckland teams – including last year’s winners the Eden Lizards – were forced to withdraw from the competition owing to the current Covid situation.