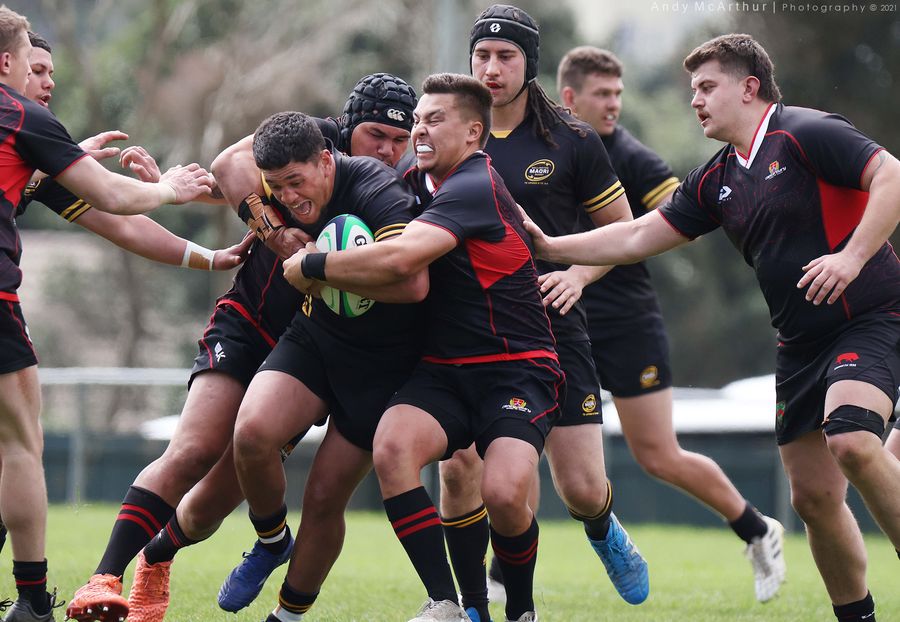 The Whanganui U18s and the Wellington U19s won their respective Hurricanes Youth Rugby Council competition titles today, in the third and final round of both competitions.

There was plenty of other rugby played today, with some close results in some contests and big scores racked elsewhere.

A round-up of the day’s rugby is below.

In Palmerston North, the Wellington U19s beat the Manawatu U19s 41-21 in the deciding match for the Central Region Shield Hurricanes Youth Council U19 competition.

It was an eventful final that had it all, including a serious injury and change of field just before half time, two yellow cards, a penalty try, the referee going down injured, and some outstanding team tries.

The game started as scheduled on the No. 3 field at Arena Manawatu, in fine, blustery conditions. Wellington had first use of the wind, and quickly scored the game’s first try from a penalty and lineout into the corner and subsequent try to second-five Riley Higgins.

Wellington went close to scoring again from the same scenario but Manawatu held them out and launched their first foray inside Wellington’s 22.

However, Wellington centre Sapati Tagoai read their play and rushed up to clinch an intercept and sprinted most of the way to the try line before finding wing Charles Mataitai who scored Wellington’s second try. Fullback TJ Clarke continued his outstanding kicking form from last week by nailing the sideline conversion and Wellington led 12-0.

Undeterred, Manawatu advanced once more into the attacking zone won a free kick and packed down a scrum from which they scored a delightful first phase try to wing Eseroma Waqalevu, running off the shoulder of centre Kyle Brown.

A few minutes before halftime, Wellington formed their attacking formation from a scrum 35 metres out with a big openside to work with. Second five Higgins made another energetic bust in midfield and found No.8 Peter Lakai who carried play into the 22. Quick hands from the next ruck saw blindside flanker Dom Ropeti score Wellington’s third try.

During this play Manawatu second-five Chance Malu stayed down injured. An ambulance was called and the game changed fields to the adjacent No. 4 ground running south to north.  Of note, there were no serious neck injury to Malu; it was a concussion and possible re-fracture of a previous broken hand when he fell.

There was still a couple of minutes to play on the new field before halftime and Wellington scored a sweet try in this period when Higgins ran freely up the blindside from a scrum in centre field and transferred to first- five Luke Walmsley. Clarke slotted the extras and Wellington led four tries to one at halftime.

The referee took a tumble early in the second half when tripped over Manawatu halfback Moape Rokosuka but re-joined the game after a short break.

Manawatu had to get back in the game, which they duly did when centre Kyle Brown kicked for a lineout in the corner and lock Hunter Morrison crashed over from the set piece. Flyhalf Harry Shaw converted to narrow the lead to 24-14.

The next incident of the match was the sinbinning of Manawatu No. 8 and captain Elyjah Crosswell, but his side was the next to score when Brown kicked for the corner again from a penalty, and this time his team were awarded a penalty try. This put them within one score of Wellington’s lead and the match was in the balance with a good 15 minutes to play.

Wellington quickly regrouped and they scored two quick-fire tries to take the game out of Manawatu’s reach. Wellington sped the game up and from a quick tap penalty 30 metres out, Higgins seized a gap and charged through traffic. He offloaded to Lakai who was brought down 15 metres short. From the next ruck, Wellington ripped it wide to fullback Clarke and then to centre Tagoai who scored a well-taken try in the left corner

Next, replacement halfback George Sims darted through a gap and transferred to lock Jono Bailey in support. From the next ruck, Wellington went wide wide to that man Higgins who linked up with Ropeti and left wing Knox Tuinasau and back inside to Higgins to score the try, his second of the match, and the game’s match-winner.

Manawatu’s restart failed to go 10 metres and from the resulting scrum on halfway, Wellington No. 8 Lakai ran 50 metres to the try line in an explosive burst. Clark kicked the extras and Wellington had the game won with a 20-point lead.

Right at the end, Ropeti was the second player of the match to be sinbinned, but this was of no consequence.

For Wellington, Higgins, Ropeti and Lakai were again their best players. Locks Jono Little and Jono Bailey, hooker Joyner Gaualofia, centre Tagoai and the replacement bench as a collective were all standouts.

For Manawatu, their scrum went beast mode on several occasions, locks Morrison and Josh Taula both played well, and their flanker Jared Selwood and No. 8 and captain Crosswell (pre-sinbinning) played well in patches. Their backs were clearly rattled after Malu was injured which forced a reshuffle which the likes of Higgins needed no invitation to exploit. A couple of errors from kick-offs and untimely penalties also proved costly for them.

Wellington were handed the Central Region Shield in a presentation on the field afterwards by Hurricanes Youth Rugby Council representative David King.

In the other U19s Central Region Shield match, the Hurricanes Heartland U20s beat the Hawke’s Bay U19s 31-27. The Hurricanes side led 19-13. This was their first win over the Junior Magpies since 2017, and meant they finished third behind Wellington and Manawatu and ahead of Hawke’s Bay.

The Whanganui U18s won the Trustbank Cup HYRC U18 competition by beating the Horowhenua-Kapiti U18s 91-19 in Levin and other results going their way.

This included the Centurions U18s missing out 36-21 to the Hawke’s Bay Saracens U18s and failing to secure a bonus point.

This saw the Wellington Samoans U18s finish second equal with the Saracens side, behind Whanganui, after the Samoans beat the Wellington Māori U18s 31-0 at Lyndhurst Park.

The Centurions slipped from first to fourth.

It was the second round of the HYRC U16 competition today. Both Wellington teams won their matches. The Wellington Black side bounced back from their big loss to Manawatu last week with a  51-25 Division A win over Wairarapa-Bush.

In Division B, Wellington Gold beat Hawke’s Bay Development 38-7 and Poverty Bay U16 beat Whanganui U16 55-21.

Wellington jumped to a 14-0 lead in the opening quarter after tries to fullback Luke Kapene and No.8 Newress Fotualii. Both were created after Canterbury surrendered meek turnovers inside their 22. Kapene collected a bobbling ball and with swift footwork and powerful fending dashed clear while Fotualii poached a steal meter out from the line and muscled over.

On the back of penalties Canterbury clawed their way back contest and eventually Wellington cracked in unusual circumstances. The ball rolled across the ten-metre mark inside Wellington territory and first-five Josh Roberston-Weepu tried to nonchalantly reverse heel it towards a colleague. Instead, he kicked it straight to Canterbury centre Sebastian Flynn without a defender in sight.

Halfback Kemara Hauiti-Parapara kicked a penalty, and the halftime score was 17-7.

The first 20 minutes of the second spell was a bumbling affair as both sides, especially the hosts, incurred the wrath of the referee and handling appeared voluntary. Wellington rearranged their backline with centre switching to wing, first-five retreating to fullback, centre venturing out to the wing and two halfbacks running the cutter.

Canterbury eventually scored when raw-boned No.8 Tepasu Thomas steamed through the Te Upoko wall and set up a second for Flynn.

The growing strength of the northerly was a challenge, but Hauiti-Parapara ignored it’s interference by slotting a 35-metre penalty to make it 20-14. Canterbury then dispatched the kickoff out on the full when Hauiti-Parapara caught the defense napping with a quick throw. Hooker Ethan Robinson-Mate crossed untouched with glee on his home field. The conversion by Hauiti-Parapara from near the grandstand sideline stretched the advantage to 27-14

Canterbury were stubborn, with the relentless Thomas and nippy halfback Will Hamilton to the fore. Both reserse props carried with gusto and Canterbury scored close to fulltime with the match ending after a knock on 40-metres shy of the Wellington line by fullback Sheldyn Hemana following an audacious run.

Wellington Prop Whetu Henry was typically sturdy, lock Hemi Fermains an agitator at the ruck and centre Jordan Glen-Bradbrook threw some wonderful skip passes to spark attacks and ripped a produced a 90-meter clearance when Wellington was under the cosh at 17-14. It proved to be a short-lived but crucial spark.

While their senior men were battling away on the main field, the Wellington Māori U18 Girls met their Wellington Samoan U18 Girls counterparts on the #2 field at Porirua Park in the opening match of their competition.

The Māori made the brighter start and were able to dominate territory, and eventually opened the scoring up the middle. A second try followed through a 50m solo effort before the Samoans were able to open their account, with the Māori adding a third on halftime.

When the Māori scored within a minute of the resumption a blowout was on the cards, but the Samoan side regrouped and scored three well taken tries to tie the match up at 24-all. The Māori would however cross for their fifth to win 29-24 and they closed out the match by denying the Samoans any opportunity to get downfield.

The other match saw the Centurions U18 Girls beat the Horowhenua-Kapiti U18 Girls 22-12 on the Kapiti Coast.

In the other match in Whanganui today, the Wellington Centurions Development senior men’s team defeated Whanganui B 99-0.

In Morrinsville, the Poneke U85kgs missed out 15-17 to home team Morrinsville Sports in a National U85kg Knockout Cup encounter.

It was the end of the line of the Wellington Pride in the 2021 Farah Palmer Cup today, beaten 26-10 by Waikato in their major semi-final in Hamilton.

It was 3-3 at halftime, but Wellington lock Sanita Levave was sin-binned and the home team scored two tries and kicked a penatly in this period. Wellington’s only try of the match was scored by prop Angel Uila in the 60th munute.

In Rotorua, the Bay of Plenty Steamers accounted for the Wellington Lions 33-32. The Lions missed several shots on goal.

In one match missed here that was played on Thursday, Scots College beat Feilding High School in the final of the Hurricanes Co-ed Cup First XV competition.