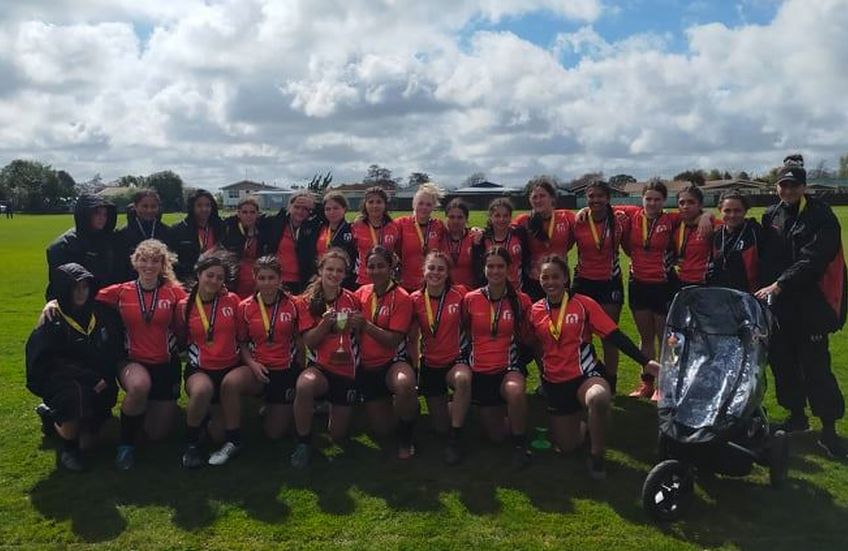 Manawatu champions Manukura retained their Hurricanes Secondary Schoolgirls rugby title that they shared last year with St Mary’s College with a 19-12 win over their Wellington rivals at Bill Brown Park in Palmerston North on Wednesday afternoon.

Like last year’s between the same teams that was drawn 10-10, the 2021 Hurricanes decider was a tough match between two evenly balanced sides, dominated by big defence and numerous turnovers at the breakdown and in general play.

A heavy shower of rain swept over the ground just before kick-off, clearing to fine, windy conditions during the match itself and both sides had problems clearing their territory throughout the game.

St Mary’s had first use of the wind, and an early period hot on attack inside Manukura’s 22 soon led to them scoring the first try. From a quick tap penalty, captain-for-the-day and hooker Faith Vaoliko-Seu surged at the line and was tackled just short. Tighthead prop Leilani Chapman carried the momentum on and she scored to put the visitors up 7-0.

St Mary’s score the first try of the final.

Manukura soon put themselves on the front foot through a series of penalties awarded to them. After a promising build-up, first five-eighth Mia Maraku was held up over the line. St Mary’s then cleared through a defensive penalty of their own and cleared for touch. However, Manukura captain and flanker Eleonor Plum-King pinched the lineout and her team swept back on to attack.

Bringing play back towards the touchline, they created an overlap and right wing Jayden Maniapoto drew the last defender and passed outside to No. 8 Pounamu Wharehinga who flew in to score to close the gap to 7-5.

Manukura strike back to score their first try of the match.

St Mary’s should have scored after another sustained period up the other end of the field, but conceded an attacking penalty right on the line and this time Manukura cleared successfully.

Played ebbed and flowed between the 22s, but just before halftime Manukura won a penalty in centre field and halfback Maia Davis tapped and went from her own side of halfway. Fast hands stretched the St Mary’s defence on the far side and blindside flanker Hollyrae Mete-Renata got the party started with a 40-metre burst past the cover defence to score. Flyhalf Maraku added the extras and they led 12-7 at halftime.

Now with the blustery wind in their favour, Manukura dominated territory but failed to break through on at least two occasions when fullback Leiana Marshall-Barton was bundled into touch on the far side and they were guilty of conceding an attacking penalty at a ruck a metre short on the near side.

St Mary’s couldn’t hold them out indefinitely though, and Manukura centre Hope Stanshall pounced on an exit play error and dived over to score a crucial try that Maraku converted to put them up 19-7.

St Mary’s were handed a chance when Manukura lock Alizay Grant was sinbinned near halfway and they briefly threatened to comeback and score. But Manukura managed to keep them at bay and the opportunity was gone.

With time winding down, St Mary’s needed to score twice to win, which proved too great a challenge. However, they had the final say when year 9 back Hera Maihi was sent through a gap on the far side to score on fulltime to make the final score 19-12.

In the backs, centre Justine McGregor was everywhere on attack and defence. The battle between the two midfields was a highlight of the match in difficult conditions for back-play.

The rushing, physical approach of the St Mary’s players troubled Mankura at times, while the latter held their own in the scrum battle and were well-organised in the lineout with captain Plum-King jumping at number two.

The Rex Kerr Cup is named after the Principal of Otaki College for 21 years, from 1976 to 1997. He was the first Chairman of the Hurricanes Youth Rugby Council Inc. on its formation in 2006, until retiring from this role in 2012. Rex is also the former President (and current Patron) of the Rahui Rugby & Sports Club. He is a Life Member of the Hurricanes Youth Rugby Council Inc. and New Zealand Schools Rugby Union Inc. Rex was a strong advocate for the development Girls Rugby within both organisations