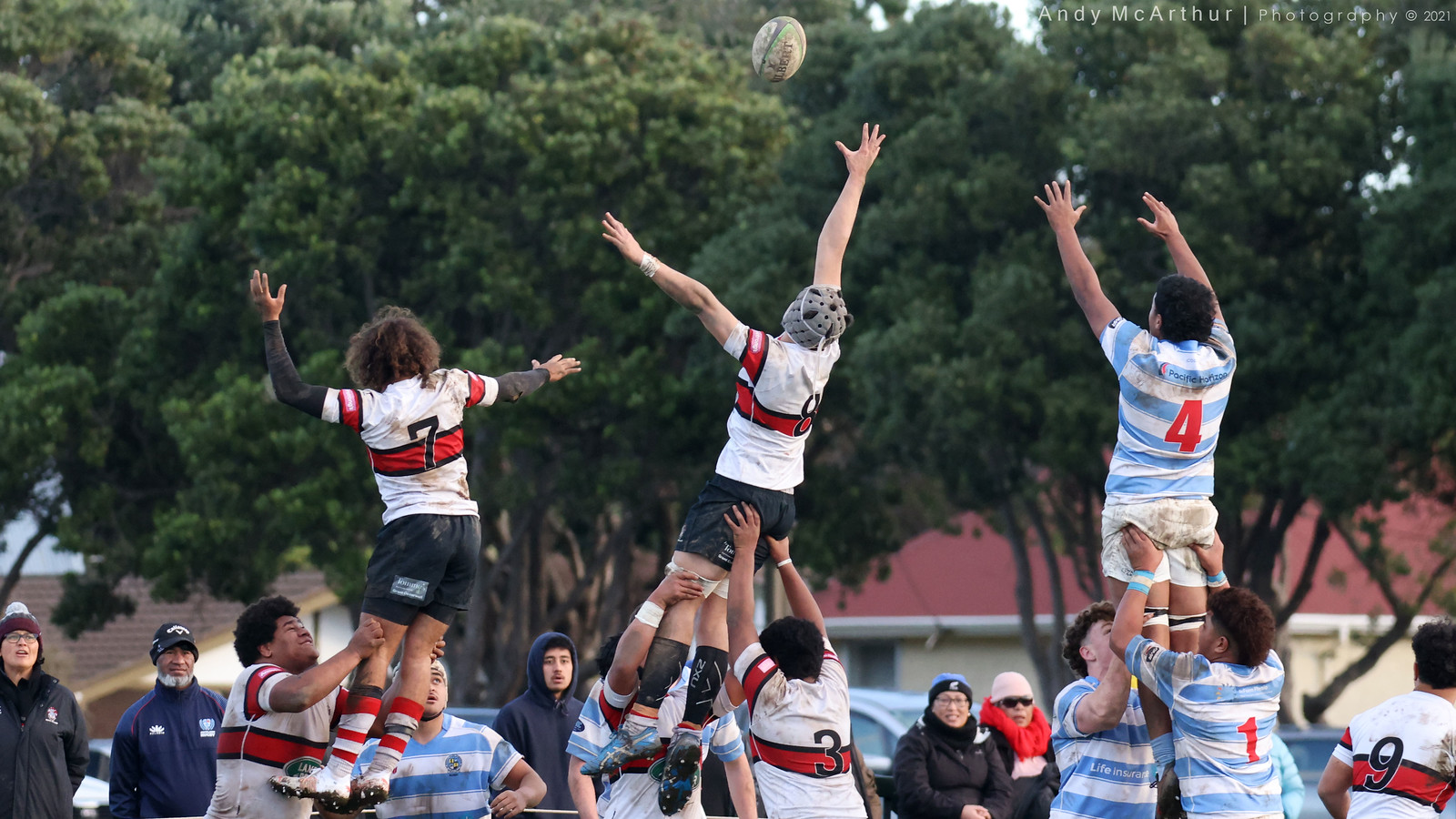 The 2021 college rugby season in Wellington concludes this weekend with the remaining finals played around the region, headlined by the Premiership decider between Scots College and St Pat’s Silverstream on Sunday.

Nine schools are involved in the six finals being played, with St Pat’s Silverstream teams also featuring in the two other marquee finals on Saturday, the U15 Father Gus Hill Cup and the Premier 2 Murray Jensen Cup.

Note that No Spectators are allowed at Alert Level 2. There are no spectators allowed at any College Sport Wellington competition.

The Premiership final is being carried by Sky TV but will also be live and free on Te Upoko Maori Radio. The U15 Division 1 final is being livestreamed on College Sport Wellington by Huddy Sports. Check guides for further livestreams.

A new champion will be crowned in U15 division 1 following back-to-back recent titles by Wellington College, as Silversteam host familiar foe St Pat’s Town in the decider. Silverstream-Town have regularly shared this title over the years, and they last met in this match in 2018.

Silverstream head into the U15 final as the top qualifier, but both themselves and St Pat’s Town won five and lost one of their six round-robin competition matches in 2021. Silverstream beat Town 22-21 in their head-to-head meeting, while their one loss was to Wellington College.

Silverstream beat HIBS 29-15 in their semi-final and St Pat’s toppled Wellington College 31-17 in the other semi-final. Zinny McCormick is the referee for the Father Gus Hill Cup finale.

Silverstream’s second XV aren’t at home for the Premier 2 final but won’t be travelling far to meet the Upper Hutt College First XV at 2.30pm. Upper Hutt College are the defending champions, having beaten this same Silverstream side in last year’s final. Silverstream beat Upper Hutt 17-10 when they met in the final round-robin game of the season in early August. In the semi-finals the following week, top qualifier Upper Hutt scored six tries in beating Bishop Viard College 36-14, while Silverstream drew 24-24 with Wairarapa College, but qualified for the final based on them being the higher qualifier. Scott Marriner is on the whistle for the Premier 2 final.

As well as the U15 Division 1 final, there is the U15 Division 2 decider being played as well. This is for the Ross Findlay Cup and is at Aotea College between the home school and Scots College. Jean Terblanche is the referee for this fixture.

The Onslow College and Kapiti College U65kg teams meet in Johnsonville to decide the U65kg Division 2 title, with Josh Budge the referee.

Paraparaumu College won the Division 1 U65kg final that was played prior to lockdown, and their school gets another shot at a title when their second XV takes on the Wellington College third XV in the Premier 5 final.

Sunday sees the now-traditional end to the season with the Premiership final, between rivals Scots College and St Pat’s Silverstream.

The final is being played at Wellington Stadium and at the earlier kick-off time of 11.35am. This is the first final to be played at the Stadium.

Last year Scots won 24-21 in a typically testing affair and return to the big dance in 2021 attempting to join the 2009 Wellington College First XV in achieving a three-peat.  Wellington College in fact won six finals in a row between 2004 and 2009.

Their sole previous meeting this year was four matches ago, but over two months ago due to school holidays and lockdowns. On that occasion Scots won 17-15. It was a tense and entertaining spectacle which saw the lead change multiple times before Scots won with a last play try to flanker Cody Lokotui. It was his second try of the game, and somewhat contentious as the ball bobbled loose after it hit the ground with claims of a knock on by Silverstream supporters. Silverstream had hammered the Scots line, but the reigning champions’ defence was dogged.  Silverstream No.8 Toby Crosby did score an absolute standout try, pushing off multiple defenders in a burst that started at the halfway line.

Scots finished as top qualifiers, winning all nine round-robin games and scoring an impressive 464 points and conceding 128. They beat St Pat’s Town 34-17 in their home semi-final, which was played back on 14 August.

They won seven of nine regular season games, their other loss coming at the hands of Wellington College, 31-27, in June.

Since 2012 Scots have won 77 of 94 Premiership fixtures with all three of their final successes over Silverstream who are 76-16 in the same period.

Twelve of the last 16 games between the schools have been decided by less than a converted try with Silverstream holding a 9-7 advantage. Scots have won their last dozen Premiership games in a row.

Both teams are blessed with game-breaking players who can influence any game on their day.

Scots will look to their two New Zealand Māori U18s forwards, No. 8 Cody Lokotui, who scored  a hat-trick in the semi-final win over Town, and captain and hard running lock Maea Tema-Schmidt who has been in their side since year 10 to lead their assault up front. Another player to look out for in the forwards is lock Archie Treadwell who is full of hustle and will compete hard for set-piece ball.

Never short of adventure in the backs, Scots halfback Muri Stewart has a keen eye for counter-attack and will look to feed the likes of youngster Ietitaia Campbell in the midfield and Eric Lawson on the flanks.

If Scots have an Achilles heel this year it could be in the goal-kicking department, so they will be looking to beat Silverstream with plenty of tries.

Silverstream have lost seven finals at Jerry Collins Stadium so will be relieved to see the back of Porirua. Scots will target their shorter lineout, but the Silverstream pack has been sturdy so will look to apply heat at scrum time. Prop Senio Sanele has been a standout again while Daniel Maose and Evin Toheriri have been big improvers.

In the loose Silverstream has experience, power and ability. Toby Crosby was named in the New Zealand Barbarians for bustle and brilliance while openside Sam Morgan and blindside Conner Tuifao have been reliable colleagues.

In the backs Silverstream haven’t always enjoyed reliable service from halfback, but the return of Tom Mannix at first-five is a massive boost. Despite two years out of rugby he has played with confidence and authority since returning late in the round robin. Lively fullback Kobe Joe-Vulu was rewarded for his form with selection in the Maori Under-18 team. Watch for Kobe to slip into the line for attacks. The key attack threats for Silverstream are Emmanuel and Tony Solomona.

Emmanuel is a lump of a lad who naturally draws defenders and if used smartly will no doubt create holes. Who could forget his 40-metre penalty to beat Wellington College on fulltime in the semi too! Tony was surprisingly overlooked for every NZ rep squad despite two well-taken tries in the semi-final and three years of First XV experience. He scored a try in the round-robin match against Scots.

Ethan Loveridge is on the whistle for the final, with John Ballingall and Daniel Mangin the assistant referees. Loveridge is officiating his first decider.