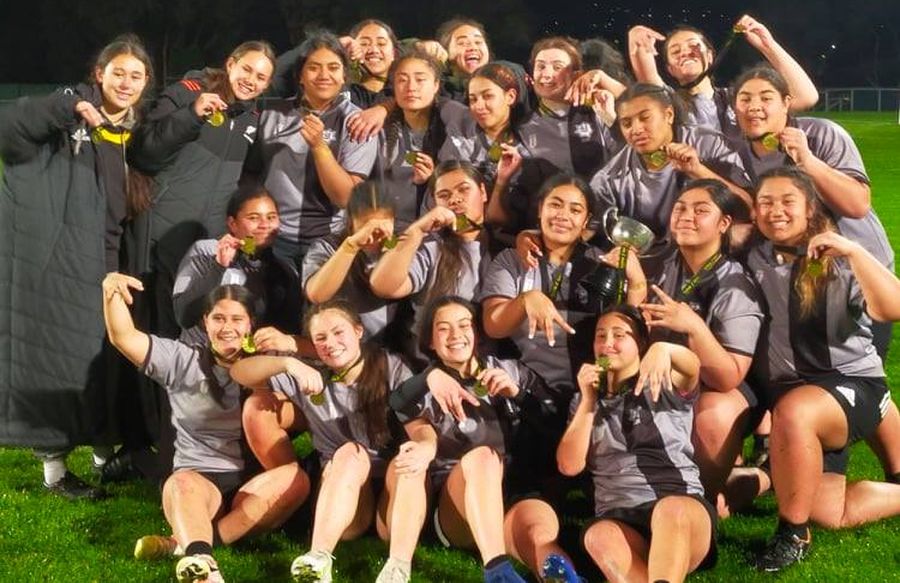 In slippery conditions, following persistent rain that subsided not long before kick-off, St Mary’s won the final three tries to one.

St Mary’s led 5-0 at halftime and pulled away after the break with two further tries.

The final was dominated by big defence by both sides, both snuffing out seemingly certain tries with often heroic, scrambling defence.

Wainuiomata created plenty of pressure throughout the match with several multi-phase periods of play, but the defending champions who have now won the title every year since 2016 had just that much extra around the rucks and in the tight forwards exchanges where the game was won and lost.

Following a minute’s silence for the sudden passing of leading Wainuiomata rugby identity Ben Tupuola, Wainuiomata made their presence felt right from the opening kick-off with a bone-jarring Tupuola-like tackle that led to a turnover and scrum in prime position.

From there, Wainuiomata launched an early assault on the line, line but the St Mary’s tacklers likewise set the tone in their endeavour by keeping them out.

St Mary’s worked their way up field and in the 10th minute scored their first try of the match when taking a quick tap penalty and prop Indiana Russell-Lia linking up with back Mischa-Saletele and both locks, Leilani Chapman and Temu Collins. The latter found fullback Nahliah Tagatauli-Tolova’a who crossed the whitewash (below).

The remainder of the first half was a tense affair, as both sides struggled for handling and continuity in the wet conditions and coming back from over a month off since their previous games.

Right on halftime, Wainuiomata went desperately close to scoring what was their closest chance to date, after a kick through into the 22 caused chaos in St Mary’s ranks in clearing the ball.

St Mary’s made a frenetic start to the second half, this time going close to scoring under the posts as Wainuiomata lost a player to the sinbin. St Mary’s soon scored under the posts from short-range to make it 12-0.

St Mary’s knocked on from the next re-start, and Wainuiomata once more poured on to attack but once more failed to break through after a concerted period with ball in hand.

After weathering the storm, St Mary’s proceeded to score the winning try, going blindside from a scrum inside the 22, recycling and lock Chapman crossing the line.

Wainuiomata gave themselves a glimmer of hope for victory when No. 8 Tyra Leota scored a well-taken try and Trinity Tauaneai converted to close the gap to 10 points. But, as they had done all match, the St Mary’s defensive unit made their tackles and they held on to the end to win.

The close score in the final reflected a competitive season, with other schools such as Wellington East Girls’ College and Kapiti College right in the mix this year too.

In the U15s competition curtain-raiser, St Mary’s College retained the Hurley-Meyers Cup, after the school’s two schoolteachers, with a 36-15 win over Aotea College in their last round-robin game.

Aotea had to take a bonus point from the game from the game to win the title, and at 5-5 at halftime they were right in the hunt.

But St Mary’s pulled away with five consecutive tries in the second half to take a 36-5 lead at one point. Aotea had a couple of injuries and few players on the bench as St Mary’s got their tails up. Aotea briefly threatened to finish with a bonus point but fell a try short of this with two late tries.

St John’s College, Hastings, beat Wellington’s Mana College 28-17 in the final of the Hurricanes Youth Council’s Life Members Cup in Palmerston North on Wednesday. Mana led 14-0 at halftime, but St John’s came back in the second half in the final that was played in fair, dry conditions.

Some school leavers to watch in 2022