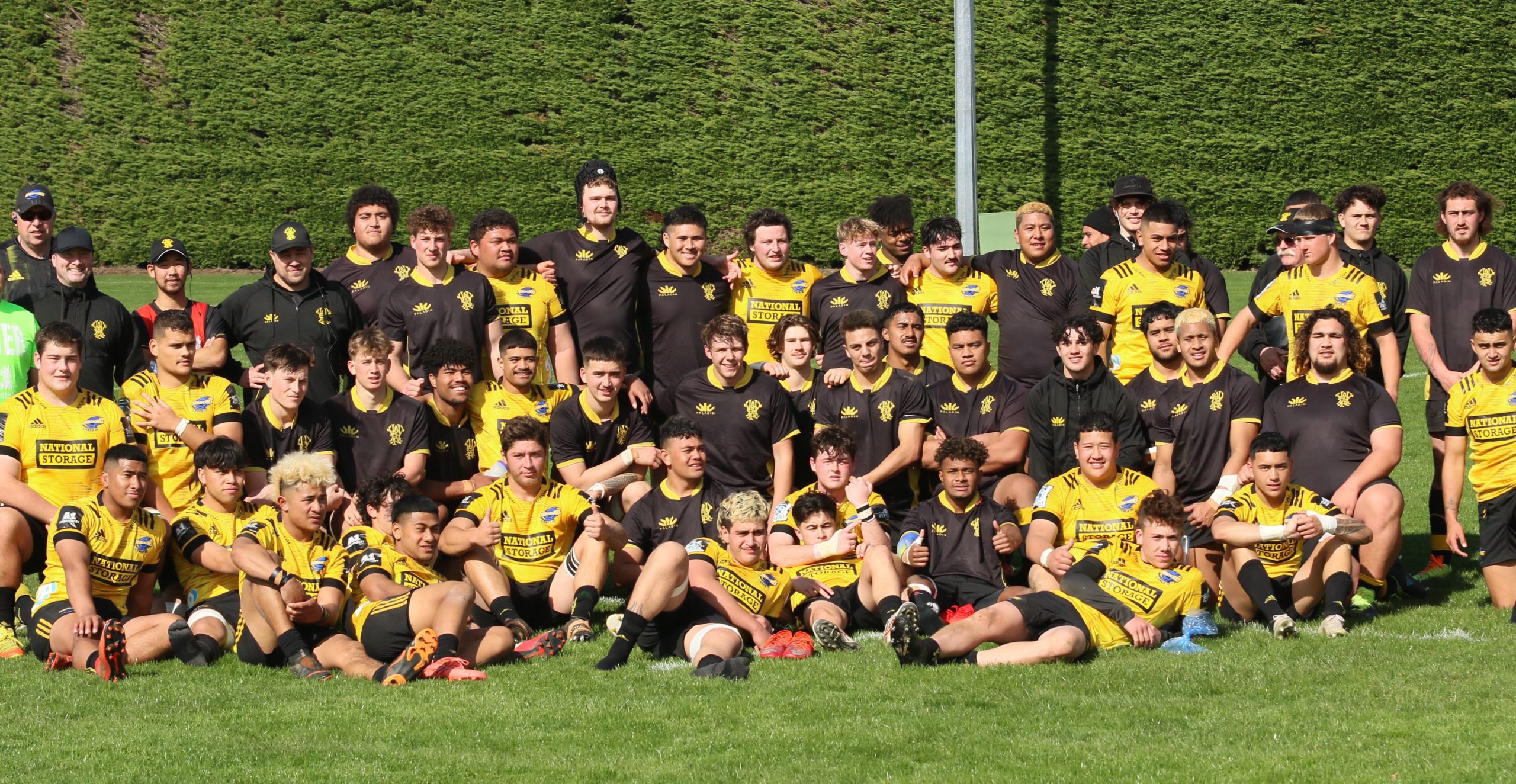 The Wellington U19s and Hurricanes Heartland U20s after their match at the Sport & Rugby Institute on Saturday afternoon.

There were wins today for the Wellington and Manawatu U19 sides in the opening round of the Central Region Shield competition, while the Hurricanes Youth Council’s U18 competition kicked off today and continues tomorrow.

The Wellington Under-19s started the Central Region Shield with a runaway 69-19 victory over the Hurricanes Heartland U20s at a sun-drenched Rugby Institute in Palmerston North.

The Heartland were genuinely competitive for 45 minutes, holding Wellington to 31-19. However, once the benches emptied Heartland’s relatively limited resources were exposed. Wellington scored the last 40 points against a side featuring a handful of Gisborne based players, and who’d only trained together for five hours.

The Heartland held their own in the scrums and skipper Logan Wakefield was a wealthy source of lineout possession. Centre Darren Falaniko showed off his quality too. A try he scored piercing Wellington’s midfield and dashing 20-metres was a highlight.

Wellington claimed the next two tries to skip ahead 26-7. Relentless blindside Dominic Ropeti and pacy centre Charles Mataitai were the scorers.

The Heartland enjoyed their best period of the match just prior to halftime. A subdued Wellington were briefly out-passioned and anchored inside their own territory. Reward arrived when blindside KJ Rimeme bustled through the black and gold wall, stumbled, regained his footing legally and stretched out. The score at the break was 26-14.

Lakai isolated the first Heartland carrier of the second-half and Higgins strolled over from a quick tap to make it 31-14.

Heartland regrouped with concerted attack and when barrel-chested loosehead Henry Fonoti got a sniff of the line would-be tackles were reduced to ten pins and it was 31-19.

Tawa halves combination George Sims and Luke Walmsley added some much needed spark from the bench for Wellington. Lakai became a bona-fide bully as fatigue and inexperience set in for the Heartland.

Tjay Clark switched to fullback and skinned his marker to stretch the advantage to 36-19.  Tagoai is the brother of Black Fern Monica and showed off the family genes with two sprints to the corner while Sione Halalilo, a standout for the Oriental Rongotai Premiers, rearranged noses with his face-palms in reaching the chalk.

Right wing Owen Wright trampled over his opposite, collecting a deft kick from Ropeti as he tippy-toed down the sideline.  Avalon’s Mataita had the last say, striding 20-meters r to cap a promising display. Wellington scored 11 tries and kicked seven conversions in total. It wasn’t always polished from Wellington. Noticeable drops in intensity and chat need addressing and the front row lacks the dynamism of the 2019 roster. The loose forwards are very promising while halfback’s Logan Love and Sims will keep each other honest.

Wellington’s next fixture is against Hawke’s Bay at Lyndhurst Park next Saturday.

The Heartland tackle Manawatu next weekend and reside at the Rugby Institute.  Halfback Chris Salu is worthy of mention. Head coach is Darren Larsen, apply supported by a bubble of expert liaison officers

The referee was Ryan McLean.

At Paraparaumu, the Wellington Samoans U18s beat Horowhenua-Kapiti 72-5. The Samoans led 40-0 at halftime and went on to win 12 tries to one. A couple of photos from that game below:

In school rugby, the two Hurricanes Boys semi-finals were contested in Hawke’s Bay.

Hastings and Napier will meet in the final next weekend.

Elsewhere, the Wellington Lions lost to Taranaki, in their NPC resumption fixture:

The Wellington Pride played Waikato in a resumption warm-up game in Taihape.

The match did not carry first-class status. Both sides scored five tries, conversions weren’t taken, so the final score was 25-25.

The Pride resume their Women’s NPC season next weekend when they play BoP, who beat Otago 31-3 today.

The Wellington Centurions team for Sunday: