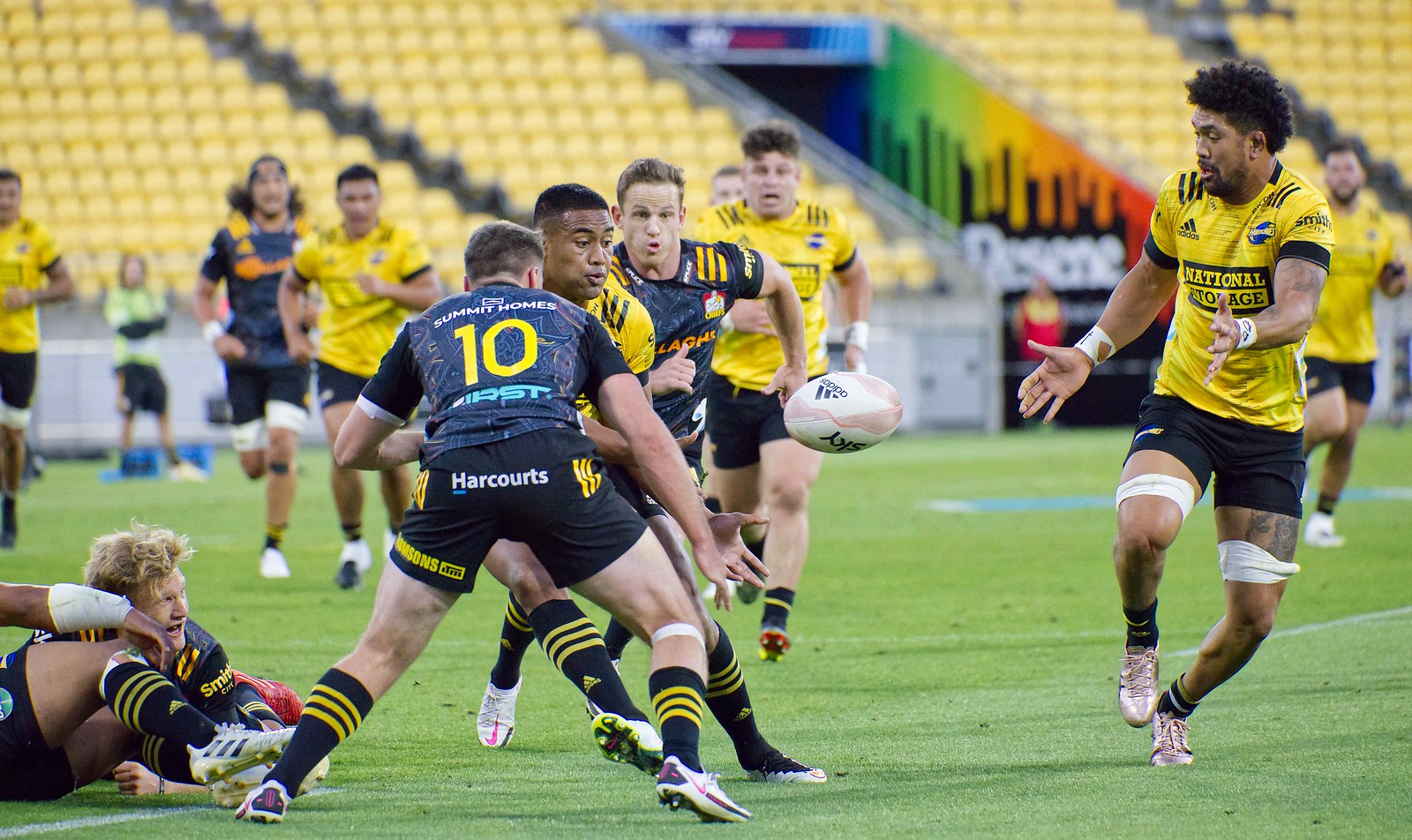 Above: Brother to brother. Julian Savea passes to Ardie Savea for the Hurricanes in their match against the Chiefs back in March this year. Ardie will captain the All Blacks this coming Sunday against the Wallabies in Perth. PHOTO: Mike Lewis Pictures.

It came swiftly and stopped a busy post-club rugby season dead in its tracks.

The Rona and rugby don’t mix. So what is a realistic timeline for the return of rugby, any rugby, this year?

Starting with school rugby in the Wellington region, it is just the remainder of the finals to be played. These include the girls Premier 1, boys Premiership and Premier 2 and U15s deciders.

It would be ideal if these could take place. They have to be played by the end of this term, which is Saturday 25 September. Best case scenario then would be a clearance to play a week in advance giving the teams time for some practice and some contact and then a combined finals day on that date.

School rugby around the country is also yet to be completed, including the Crusaders First XV final between Nelson and Christ’s Colleges, the North Harbour First XV semi-finals and the Auckland 1A, which still has one round to play before the playoffs. For the second straight year, the ‘Top 4’ tournament has been called off.

All representative rugby and the National U85kg Knockout Cup was heating up and now all this is up in the air. It is hoped that if we get a re-start then at least some of these games can be played.

The season can be pushed back into October and into November, but then considerations need to be made around ground availability and player welfare, fitness and desire.

One idea is for an extended sevens season or the creation of a series of 10s tournaments, to salvage the season and keep players engaged heading into 2022. Six months away from the game would be a long time.

Then there is the NZR National Provincial Championship competitions – the Heartland Championship, the Farah Palmer Cup and the Men’s NPC.

Spare a thought for the Heartland Championship teams and players. This would be the second successive year their competition has failed to go ahead, if indeed it doesn’t. Like last year, it could be a case of these unions salvaging something and playing a few weeks of regional matches, such as Whanganui, Wairarapa-Bush and Horowhenua-Kapiti playing a tri-series.

The Women’s NPC is well advanced, with two rounds to play, then semi-finals and finals. So as scheduled a month of games to play.

The Men’s NPC is two weeks in to a nine-round season, plus semi-finals and finals. Prospects of that competition being played out in anything resembling its entirety appear bleak.

NZR have already stipulated that all teams need two weeks of training and conditioning before they can play. So it appears that late September is the earliest it can start.

Then there is the wider Auckland region, which takes in Northland, North Harbour, Auckland and Counties Manukau. They are heading for a much longer lockdown, so does the competition resume without them?

These four unions also comprise a third of Sky TV’s audience, so that will be a leading consideration as well. Would Sky be motivated to broadcast a competition shorn of much of its base audience?

If the NPC fails to re-launch, then perhaps the 2021 season could resume with a series of ‘friendlies’? Hawke’s Bay could take the Ranfurly Shield on tour. Or the three Hurricanes unions – Wellington, Hawke’s Bay and Manawatu – could play a tri-series amongst each other in October. U19s matches could be curtain-raisers, so run them together.

At least fans have the All Blacks!

Counting down to their match in Perth this Sunday, kick-off 6.30pm NZT.

Great that Oriental-Rongotai’s Ardie Savea will captain the All Blacks, continuing the line of Wellington All Blacks captains.

Tom Ellison was the first All Black captain from Wellington though he was born in Otakou. Ellison was picked as skipper from the Poneke club for the 1893 tour of Australia having played for the Wellington representative side since 1885.

David Gage who captained the All Blacks against Queensland in 1896 was another early leader aligned with Poneke. In fact, when he died aged 48 in 1916 the club paid for his headstone. Gage played an incredible 68 of 74 matches on the 1888 Natives tour of New Zealand, Australia and Great Britain.

Cliff Porter, out of the Athletic club, holds the record for most All Black matches captained for a player from Wellington. He won 31 of 37 matches captained from 1924 to 1930. Petone’s Andy Leslie had 33 games as captain from 1974-76.

Fred Roberts, who captained the 1910 All Blacks to a series victory over Australia, was the first Wellington test captain and was ironically from the Oriental club. The halfback was a key player on the 1905 Originals tour.

Sam Whitelock has a 10-0 record as All Black captain. Richie McCaw won his first nine tests as skipper. Kieran Read won his first 19 tests as captain.

Jock Richardson won all 16 matches as captain, including the English and Irish tests on the 1924/25 Invincibles of which he was the last survivor passing in 1994.

Devastating news this past weekend – may Tom Walsh rest in peace:

Steve Hansen on the “breakdown” recently:

“The issue that we have in our game at the moment is there is no clear officiating of the rules.

“If you look at the rulebook, it talks about a ruck and it never talks about the breakdown. Breakdown is a word used more often than any other word in the game – there’s not even a rule for a breakdown and we have an old, antiquated law that says two people will bond over the ball and that’ll be a ruck. Well that never happens in the game.”

Cheslin Kolbe is joining Toulon from fellow French giants Toulouse. The 27-year-old Kolbe, who is currently playing in the Rugby Championship with the Springboks, had two years left on his contract with Toulouse, who he joined in 2017, winning two French titles (2019, 2021) and the Champions Cup this year. He has scored 31 tries and won 63 of his 82 matches for Toulon.

The 2021 National Sport Club Survey (NSCS) by the New Zealand Amateur Sport Association launched last Thursday – (and will be open through to the end of the month).

7,000 clubs across New Zealand have been invited to participate.

They have already noted enthusiastic engagement around this year’s primary theme: Women + Girls.

The survey will also have a fourth year of data related to other key sport club metrics that are being tracked longitudinally.

The Wellington Axemen are advertising for coaches in 2022:

Cool photo of the Tawa RFC:

Last but not least, stay safe out there. Exercise and train in your own bubble and don’t venture too far from home. There is a reason for that. What if you snap your Achilles on a trail run, smash your teeth in a mountain bike accident or get attacked by a dog down at the park? These three things have all happened to us or people we know over the past week!

This Monday column is a collaborative one with up to several contributors. If you have news or information or something to contribute please email editor@clubrugby.co.nz

Similarly, if you are a club or organisation using Instagram to get your news out there, did you know that only half your audience at best is on social media, and less checking it regularly? So if you have some news or something to promote for free with us please get in touch!

Pressing for the top