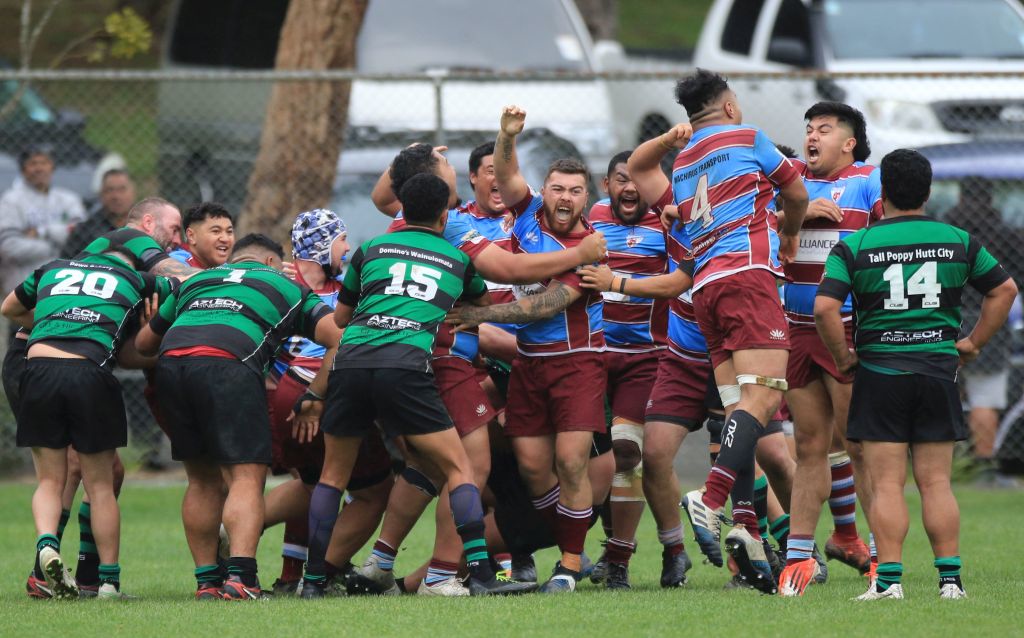 The Avalon Wolves Premier 2 side celebrate their win on fulltime against Wainuiomata on Saturday.

Avalon won just a single Swindale Shield game in 2021 and that was against winless Paremata-Plimmerton. The Wolves fared much better in the ‘lower’ grades, winning two titles. Marist St Pat’s, Northern United and Petone collected no silverware.

On Saturday the Wolves Premier 2 squad joined the Under-85kg juggernaut as grade champions. Avalon toppled Wainuiomata 21-19 in the final of the HD Morgan Memorial Trophy. It was a victory of true grit. Captain Daniel Sione-Leota captures the drama at William Jones Park.

“We got first points with a penalty but not long after Wanui got a try, and were ahead most of the game. We scored a crucial try with 20 minutes to go. Our first-five Thomas Kiwara threw a skip pass to our winger Esera Andrews and he bowled over their wing and fullback to put them ahead 21-19.

“The last 10 minutes were spent on defence. Wainuiomata had a penalty straight out in front and missed. They got another two penalties within striking distance but chose to tap instead.

“There was a build up of emotion which was hard to control but the intensity and excitement of our boys was outstanding. The Colts in our team stepped up and it was special when the fulltime whistle went.”

Dane Hayes was a popular personality at Fraser Park. He was captain of the Presidents who threatened to unravel after several earlier seasons undefeated. Passionate and generous with his time, the 35-year old father of three tragically died last week leaving behind three children under seven. His passing spurred on Avalon.

“He had been at the club a long time and represented the jersey with a lot of pride. He was a beautiful guy off the field and even those that didn’t know him personally were hurt by his death. We are a small community here in Avalon and it was definitely a motivation for the boys,” Sione-Leota explained.

Pastor Phil Green, No.8 Sonny Oloapu and fullback Anaru Waihape were especially inspired in the decider.

The fact Avalon was in the final was a minor miracle in the first place. Three weeks ago they actually beat Paremata-Plimmerton but lost the championship points because they only fielded 13 registered players. Paremata-Plimmerton generously sacrificed two from their roster to ensure a contest.

Enough numbers were scrambled together for the quarter-final away to Petone. The Villagers were slayed 39-25. The midfield duo of Reupena Sione-Leota and Anzac Masua caused carnage.

“The score was 8-7, the same as the World Cup final. The game was all defence, big hits, until our prop Manuele Schwalger made a break and offloaded to lock Joe Nacodamu with 10 minutes to go for the winning try.”

Fulltime after the 8-7 semi-final win over Stokes Valley.

Assembling enough numbers for Premier Reserves is a huge challenge for every club. The demands of the senior team coupled with everyday, busy, realities requires players to exhibit sacrifice, commitment and discipline. Sione-Leota has five children on top of his fulltime job as a Business Analyst for the Ministry of Social Development. He is also active in the Church of the Latter Day Saints. His loyalty to Avalon is unquestioned having played for the Premiers from 2008 to 2018, but some frank discussions were required about how to improve the attitude of some others at the club.

“We have a player committee with a few seniors and leading women. We plan things, raise issues and converse with the club committee. It was a slow process to start, but the players feel like they have more of a voice and everyone is more in sync.”

Avalon’s 85kg side has been in sync for some time now. In 2019 they won the Paul Potiki Memorial Shield for the first time,  a feat repeated this year by winning 15 out of 16 games and taming Johnsonville 13-3 in a tense final. Remember in 2018 Avalon was 16-0 until they lost to the Upper Hutt Rams in the last minute of extra time in the decider. Players like Brett Edmonds, Graham Cherry, Alex Newtown, Damian Austin-Davies and Arthur Flux have become valued role models.

Avalon’s U85kg side with this year’s Paul Potiki Shield, following their recent 13-3 win over Johnsonville in the final.

“We’ve worked really hard to change the culture of the club and make it into a more family oriented place,” President and club captain Troy O’Kane said.

“We’ve had to deal with some rubbish in the recent past but were really proud of what we’ve achieved. The 85’s have been the most successful team in the club for some time now and were awesome in the final against Johnsonville. We’ve rebuilt our women’s team and though the Prems only won a single game we saw enough improvement to suggest things will be a lot better next year.”

Avalon’s Colts managed to win the first round of the Division II JRD cup and the Avalon Cup was established for competition between Naenae College and Taita College. All Black prop George Bower is a former Wolves player.