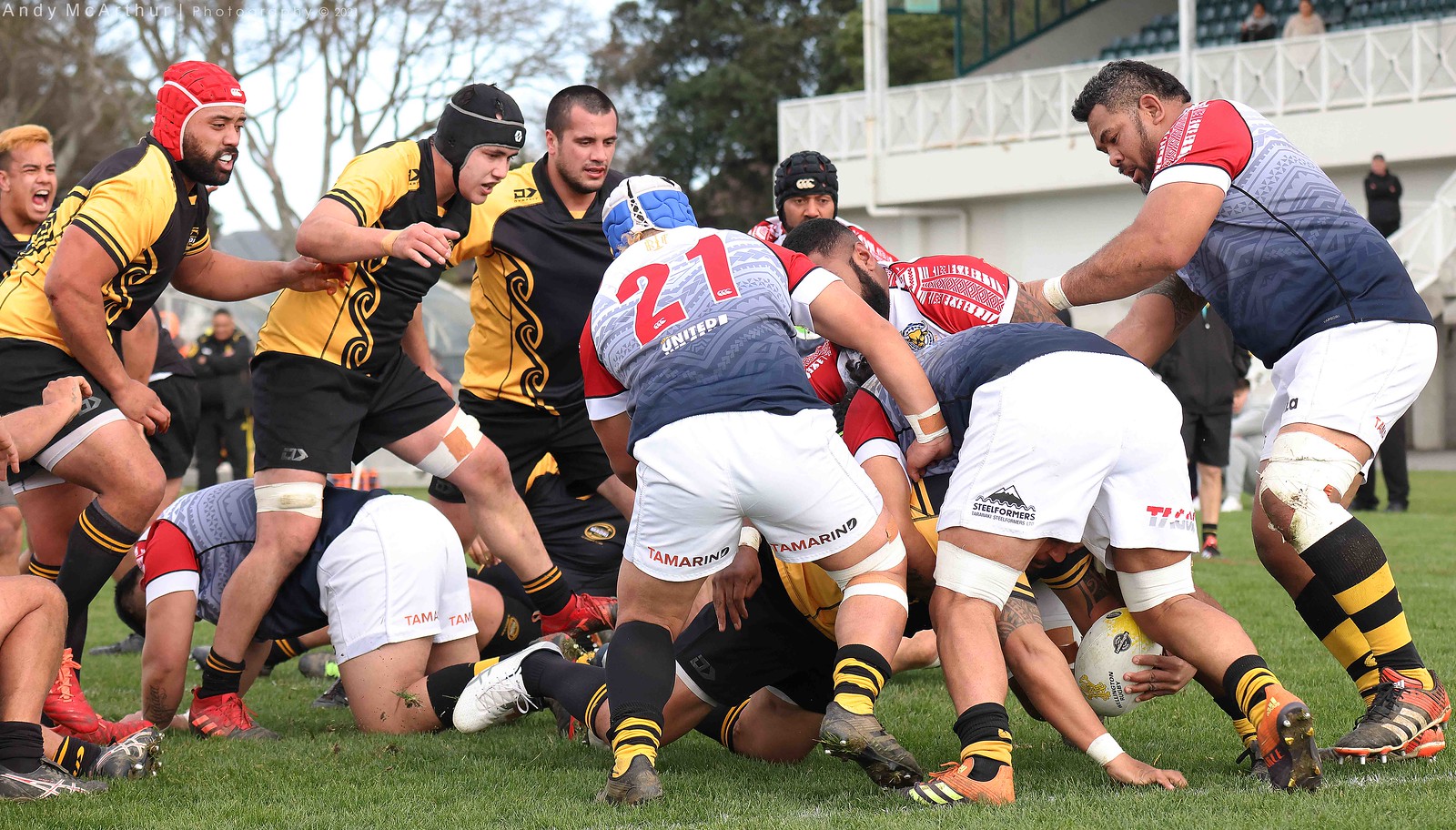 The Wellington Maori side are in Levin tomorrow to play the Horowhenua-Kapiti Heartland squad, one of three Wellington represenative teams in action against Heartland teams. Those games, the Premier 2 and Reserve Grade Division finals, two more National U85kg Knockout Cup matches and First XV Premiership semi-finals are all being played tomorrow.

UPDATED: The curtain finally falls on the club season tomorrow, while it’s the business end of matters at the point of the college game. There’s also six representative sides in action, along with two more matches in the National U85s Club Cup.

The last two club titles of the season will be decided tomorrow. First up will be the final of the Premier 2 Division 2 HD Morgan Memorial at William Jones between Wainuiomata and valley neighbours Avalon, kicking off at 12.30pm. It’s been a contrasting series of events over the past two weekends; top seeds Wainuiomata have taken care of business on their home ground in beating Petone White and then Norths White while carnage has raged on the other side of the bracket. Avalon went through the second round with just one win to finish seventh, and if not for the quarterfinal format would have finished their season three weeks ago. But here they are after toppling both Petone Blue and Stokes Valley away from home, and will back themselves to do it one more time.

Wainuiomata will go in as favourites, and did win their two previous meetings this year by 54-0 and 27-17 which came in consecutive weeks to end the first round and start the second.

Wainuiomata club veteran Daniel Cherry said that the semi-final went well despite a slow start and a couple of early errors. “I think what we are needing to do is follow our game plan and believe in the boys on your inside and outside and keep up the positive talk on and off the field,” said Cherry this week ahead of the final.

Cherry, who has played over 150 matches for the Wainuiomata Premiers and the same number for this team said the squad is a tight knit unit. “I believe the strengths of our team is the brotherhood, with one sister in the mix, and the fact we enjoy each other’s company at training and game day. We have a great mix of older and younger players.”

The team’s top scorer so far this year is Jason Love with nine tries and the top points scorer is Corey De Kort with over 60 points. Cherry warned that the front row are handy at finding the try line as well, but joked that is because they can’t pass.

A large crowd of both club’s supporters are expected to ring William Jones Park on Saturday.

“Our club supporters are great, they come out every Saturday rain or shine and they give the fellas an awesome boost, that’s what’s so good about coming from a community like Wainuiomata as everyone’s part of the family here. I think the park should be packed; it always is.”

“The boys will be giving their everything for Nick Domonkos as this will be his last season at the club because he’ll be moving to the Hawke’s Bay for his retirement. He has done a hell of a lot for Wainuiomata rugby club over the many, many years he’s been here.”

Several Wainuiomata players might be hanging up their boots for good after this game too, such as Cherry himself, so are keen to go out on a winning note.

The very promising young referee Ethan Jefferson will be in charge of this final.

The final trophy that will be handed out is the Allan Seerup Cup, which is the prize for the Reserve Grade Division 2. It’ll be played out at Te Whaea from 2.30pm between a pair of city sides in the top qualifiers the OBU Pink Ginners and the MSP Internationals; two of the longstanding sides of the grade and after both overcame Upper Hutt Rams opponents last week.

It’s crunch time in both of the top two College grades, with the semifinals in both the Premiership and Premier 2 divisions. In the former top qualifier Scots will be on home field for the visit of eastern suburbs neighbours St Pats Town. Scots have been in impervious form in local competition so far this year – including a 36-12 win over Town a little more than a month ago – and with talent all over the field will be the favourites, but if Town can drag them into a forwards battle where the strength of their side lies they’ll fancy pulling off an upset.

A short distance away Wellington College faces Silverstream for the second time this year, with this match now at Hataitai Park due to the closure of the fields at Wellington Cllege. The first instalment was a cracker, with College roaring back from an early deficit to take a handy lead only for Silverstream to threaten late on before College won 31-27; so hopes are high for similar drama tomorrow. The two sides are closely matched on paper so the question may be who benefited most from last week; Silverstream by playing or College getting to rest after being defaulted to.

The two Premier 2 semi finals are at the head of the Hutt Valley. Upper Hutt College will be looking to rebound from their loss last week when they host Bishop Viard, who they beat handily earlier in the year, while the Silverstream 2nds – who toppled Upper Hutt last Saturday – are visited by Wairarapa College.

Two games in the National 85s Club Cup tomorrow, each at different stages of the competition. At Kelburn Park local Division 2 winners Old Boys-University Scallywags will look to step up when they host perennial Division 1 contenders the Upper Hutt Rams in their round of 32 clash. The winner will join Avalon, MSP, Eastbourne, and Poneke in the last 16, where they will meet the winner of the match between the last two South Island sides standing – the Carisbrook Bush Pigs and Lincoln Eels – who meet under the roof at Forsyth Barr tomorrow morning.

The second match here locally is in that last 16 bracket, being played between the aforementioned Poneke Wanderers and Eastbourne Gulls on neutral turf at the Hutt Rec. Eastbourne were the most comfortable of last week’s winners getting past HOBM 22-16, while Poneke grimly hung on against a scratch Petone side that threw everything including the kitchen sink at them in the last few minutes before prevailing 21-19. The winner of this one will proceed to the quarter-finals and await their next opponent, which could be from Taranaki, Waikato, or West Auckland.

Sunday is where it is at for the three full representative sides, with both the Lions and Pride in Hamilton to take on their Waikato counterparts and the U19s across Cook Strait in Blenheim for a Game of Three Halves against Canterbury (1.00pm) and hosts Tasman (150pm).

The Lions and Waikato will be resuming what have traditionally been high-scoring, free-wheeling affairs.

The two teams last met in round one last year – with Waikato winning by a record 53-28. This was mostly due to Damian McKenzie scoring 33 points, but he won’t be playing this game as he is starting for the All Blacks on Saturday night against Australia.

The 19 points the Lions scored to beat Waikato in Hamilton in 2013 (19-14) was the lowest winning score that scoreboard operators in this contest have posted in their past 34 clashes dating back to 1991. The two teams go into Sunday’s encounter having met 43 times in NPC matches, with Wellington ahead of the head-to-head ledger on 24 wins. Waikato have won 19 times and there has been one draw.

The number 37 is significant for Waikato in these games – since 2004 they have posted a final score of 37 four times against Wellington.

The Lions make two changes to the side that started against Northland, both in the front row. Vince Sakaria comes in for the injured Xavier Numia, and Bruce Kauika-Petersen replaces Asafo Aumua. Taking their spots on the bench are Tyrone Thompson and Hoani Tui, who is in line for his first Wellington appearance since 2008.

The Pride last met Waikato in 2019, winning 59-31 at the Stadium with outside back Kolora Lomani scoring a hatrick and Amanda Rasch netting 24 points. Wellington have won the last three Farah Palmer Cup encounters with Waikato, but before that the northerners had won the previous three meetings in this competition.

For the next tier of men’s sides, they’re all in action tomorrow against Heartland Championship sides in their final tune-ups before that competition kicks off next week. The only one here is at Jerry Collins Stadium where the Centurions line out against Whanganui. The Maori make the short trip north to Levin to play Horowhenua-Kapiti, while it’s a bus ride over the Remutaka’s for the Samoan’s as they head to Masterton to face Wairarapa-Bush.

Team to be named TBC