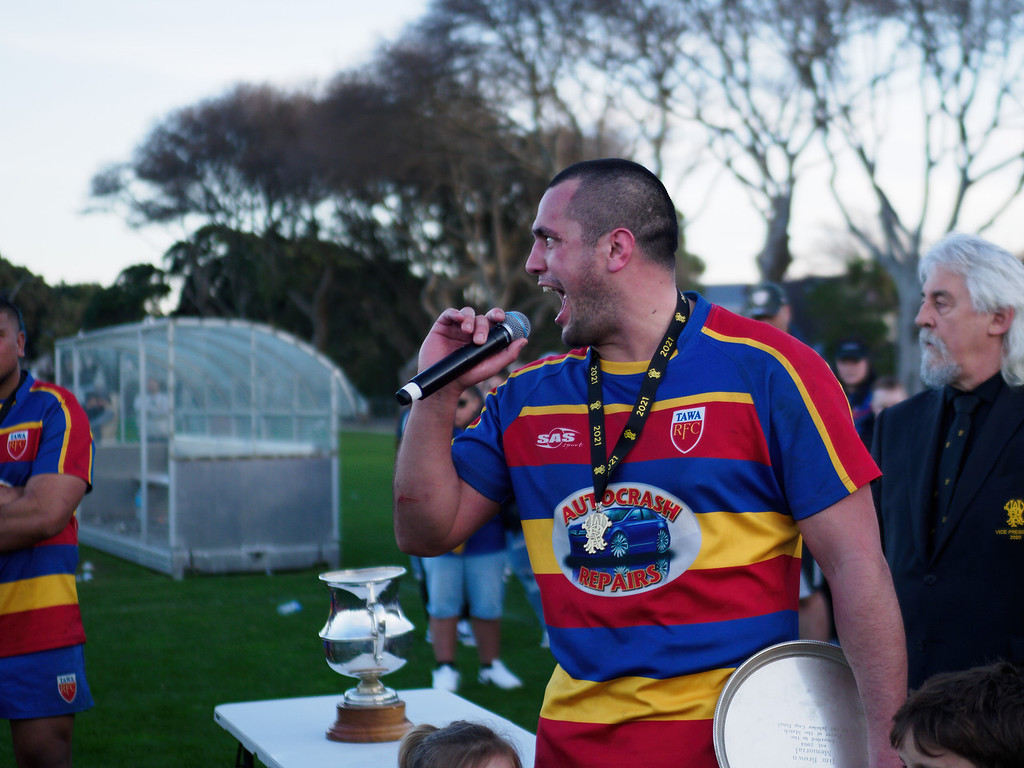 “It was a shock to win,” said Hemi Fermanis of his Jubilee Cup final MVP accolade. “I was standing next to Kem [Kemara Hauiti-Parapara] and I said to him there you go, go and get your trophy, but then the guy on the microphone called out number four!”

Tawa beat Marist St Pat’s 36-7 – a resounding scoreline for the Jubilee Cup final. What were the areas of MSP’s game that Tawa thought they would have an edge over?

“We knew their forward pack was solid and that they loved to drive around the middle of the field, and we backed ourselves with our second-five and centre and we made sure our defensive line was going to hold them out, he told the Huddy Hui on Wednesday night.

Lua Lualua and Elijah Va’a Brooking was Tawa’s midfield combination in the final and formed an effective screen throughout long periods of the final.

Tawa had also previously beaten MSP 27-23 in the Swindale Shield round.

“We also backed our set-piece. The forward pack was always the engine room of the team throughout the season.”

The season wasn’t always plain sailing. Tawa won eight games (and drew one) of 13 in the first round Swindale Shield competition.

They started the season with an inauspicious 0-12 loss at home to Petone, and defeats also included a misfiring 14-22 loss to neighbours Northern United in round 11 of the Swindale Shield and a 13-28 loss to first round champions Old Boys University in round 13.

Finishing outside the top 4, Tawa played all four matches in the Jubilee Cup round, beating Petone 27-7, Oriental-Rongotai 19-14 (in atrocious conditions), Hutt Old Boys Marist 29-18 and then MSP 36-7. The last three sides in that list finished ahead of Tawa in the Swindale Shield.

“Tawa has always been a hard team to come up against when we have been down. We finished the season strong, and we are always tough with momentum on our side.”

“Tito Ioane actually planned on retiring after his 100th game recently, but after a few shoulder taps we managed to keep him in! We are not the tallest locks in the club but he does a good job.”

Despite being up by almost 30 points near fulltime, Fermanis wasn’t about to celebrate until the end.

“It wasn’t until the final whistle blew and the ball went out that I realised what we had achieved out there on Saturday. When something as big as the Jubilee Cup is on the line it is not over until it is over!”

Brother TJ Fermanis was also a winner on Saturday, a key part of Tawa’s second XV side that won the Premier 2 Ed Chaney Cup title. TJ (2016) and their third brother Ezra (2013) are former Jubilee Cup winners with Tawa.

Another former Jubilee Cup final MVP is Steve So’oialo, who won the Jim Brown in 2013 and is a key part of Tawa’s coaching set-up.

“Having all the So’oialo’s involved in Tawa is monumental for this club. Not just this year, but in past years too. Steve has been there since I first joined Tawa in 2015.

“Having Trent Renata on board was also a big part of our success.”

Another big part of Tawa’s success is how they have introduced a group of young players.

“They have all fitted in well. Weston Sao [openside flanker] being one, you look at him and he doesn’t appear to be too threatening out there, but he backed himself and was a key player in the final.

A fascinating aspect of Tawa’s pre-game on Saturday was their warm-up, and specifically where it took place – across the road at the Bellvue Hotel, which is owned by Tawa chairman Dave Banks.

Asked about the rumour that Tawa’s players had a shot of whiskey before they crossed the road to the ground, Fermanis didn’t deny it.

Of Mormon faith, Fermanis spent 2013 and 2014 overseas away from rugby. “I was called to the Micronesian Islands. Being called to serve on a mission is itself a leap of faith, you are going somewhere which is foreign to you. Those two years helped shape who I am today. The morals and standards I have is what I learnt and gained through that.”

Those lessons have transferred to rugby.

“I have been in positions where I have had to lead and teach. It has helped me at times with my team as well.”

Fermanis will be playing some matches for the Wellington Maori in the coming weeks, but looks forward to spending more time on the weekends with his family in the coming months.

“We started training in mid-January, so it is such a long season and you need that break at the end of it.”

Watch the full Huddy Hui, including some further commentary about the National U8kg Knockout games coming up: