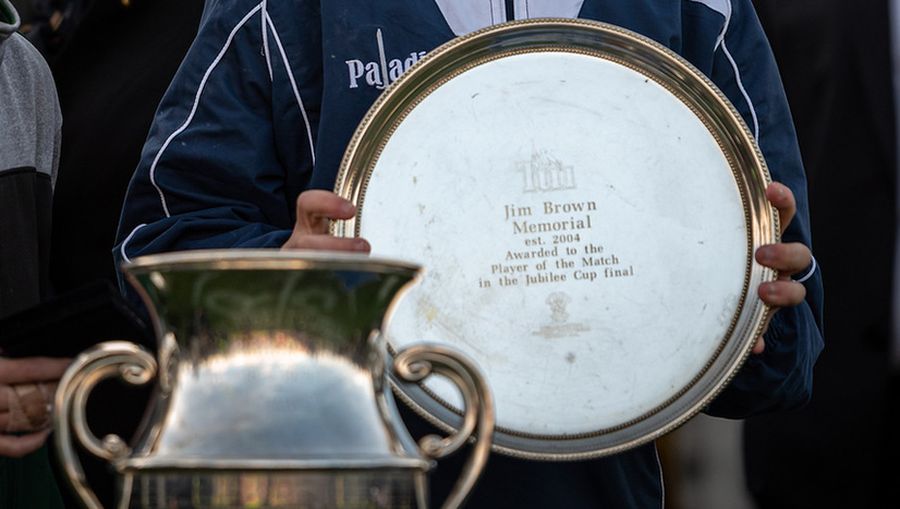 The Player of the Jubilee Cup Final is awarded the Jim Brown Plate.

Jim Brown was a stalwart of the great Petone teams of the 1960s and 1970, playing over 200 matches for the club and many for Wellington. He was a contemporary of former Petone and All Black captain Andy Leslie, who described the former centre as “one of the best players I played with, and a player with a great rugby brain.”

Leslie added that Brown went within a whisker of being selected for the All Blacks and was measured up for an All Blacks suit the day before the team was named. He just missed selection and then subsequently broke his leg and never made the national side. Brown died of cancer in 2004 and his family donated the Jim Brown Plate that year.

The previous 10 winners of the Jim Brown Plate are detailed below:

2020: Dale Sabbagh (Old Boys University): The OBU Goats won their fourth Jubilee Cup in six seasons, beating Norths 22-14. First-five Sabbagh pulled off two try-saving tackles in the second half and guided his side around the paddock with authority. A 30 metre run in open play that set up a try for lock Taine Plumtree was a key play of the game.

First five Dale Sabbagh makes a break and sets up Taine Plumtree’s try in the 2020 Jubilee Cup final. Norths were so impressed by his performance they persuaded him to join their squad in 2021!

2019: Campbell Woodmass (Northern United): A year after winning Auckland’s Gallaher Shield for Ponsonby and a week after scoring the winning try for Norths in their last-gasp semi-final win over Tawa, Campbell Woodmass was MVP of the final. Norths held out Wainuniomata to win 23-16, with a dominant scrum and coolness under pressure a key factor. Woodmass was part that and his two second half penalties gave them the winning edge.

Campbell Woodmass after being named Player of the 2019 Jubilee Cup final.

2018: Alex Barendregt (Old Boys University): From losing Premier Reserve finalist to Jim Brown Memorial Medal winner – Alex Barendregt couldn’t even dream up that reality in an Amsterdam coffee shop. The Billy Goats loosehead, affectionately known as “Dutchie”, became the only prop since All Black Jeff Toomaga-Allen in 2012 to win the player of the match in the Jubilee Cup final.Old Boys University beat Norths 37-31 at the Petone Rec. The former Netherlands international produced a lion-hearted shift in the tight and he made several eye-catching big plays in general play.

Alex Barendregt with the Jim Brown Plate in 2018.

2017: Regan Verney (Old Boys University): Midfield back Regan Verney found a rich vein of form in in 2017, carrying into the Jubilee Cup final. He became the first midfield back to win the Jim Brown Plate as Player of the Final. Aptly Brown himself was a Wellington midfielder. Verney made a break which directly led to OBU’s third try and sealed the 32-19 victory by finishing off a spectacular break by Jono Ihaka in the grandstand corner.

2016 – Etuale Togia (Tawa): The second wing in succession to win the final MVP. Endings to a career don’t get much sweeter than that of Tawa’s Etuale ‘Jet’ Togia. In a remarkable closing of his club rugby curtain spanning 18 seasons and a tick over 250 Premier games, Togia was crowned Jubilee Cup champion for the second time, He played a vital role in Tawa’s 24-20 win over Marist St Pat’s, scoring two tries and helping set up another, all in the space of 60 minutes.

2015: Joe Hill (Old Boys University): Joe Hill played a match-winning role against Marist St Pat’s In steady rain at Jerry Collins Stadium, Hill scored two tries and almost grabbed a third as his side went to the break leading 18-6. The Goats turned on big second half defence and held on to win 30-27 and annex their first title in 50 years.

Joe Hill, after his two-try effort and 2015 final MVP performance.

2014: Steven Bradshaw (Hutt Old Boys Marist) The 2014 Jubilee Cup final was the Battle of the Hutt Valley. The Hutt Old Boys Marist – Wainuiomata final lived up to its billing, with both sets of forwards locked in a titanic struggle throughout. It could have gone either way, but a solitary penalty was all that separated the sides and HOBM won 14-11. At the heart of HOBM’s effort was lock Steven Bradshaw who was on fire. Playing alongside his All Black locking partner Jeremy Thrush, Bradshaw was a decisive figure in several of the game’s key moments.

Steve Bradshaw with the plate in 2014.

2013: Steven So’oialo (Tawa): In 1998, Steven So’oialo helped Wests destroy Tawa, 53-21 in the Jubilee Cup final. Fifteen years later the veteran of 38 tests for Manu Samoa returned as a player/coach for Tawa in their second Jubilee Cup final against Oriental Rongotai. The halfback had a profound influence. Besides his sharp passing, astute tactical kicking and abrasive defence around the ruck, So’oialo scored a crucial try when his side was down 13-7 just before halftime. This gave them a14-13 halftime lead, which they would not relinquish.”

So’oialo scores his clutch try for Tawa in the 2013 final.

2012: Jeffery Toomaga-Allen (Marist St Pat’s): The 2012 Jubilee Cup final was played on a rain-soaked Hutt Recreation ground. It featured no less than five capped internationals and an array of grizzly club veterans. The game itself was a desperate struggle, won 11-8 by Marist St Pats over Oriental Rongotai. was outstanding youth that was the talking point after this final. Ories 19-year-old openside Ardie Savea was outstanding in a lost cause, but the Jim Brown Plate was awarded to prop Jeffery Toomaga-Allen. Always strong in the scrum, the 21-year-old Allen had his renowned running game suppressed by the conditions. However his work in tight was tireless.

Jeff Toomga-Allen, the week before in MSP’s 33-6 Jubilee Cup semi-final win over Norths.

2011: Iani Pahulu – Oriental-Rongotai
Oriental-Rongotai stunned Northern United 40-18 to win their first Jubilee Cup and their No. 8 Iani Pahulu had a blinder. He was the everywhere man as Ories came back from 6-13 behind to scored five tries to blitz two-time defending champions Norths. They scored four of these tries in succession and led 33-13 after 50 minutes. All four of these tries had the huge crowd on its feet – after the weather had turned windy, wet and cold from the south just before halftime after bright sunshine all day up to that point. He scored one of these tries himself.