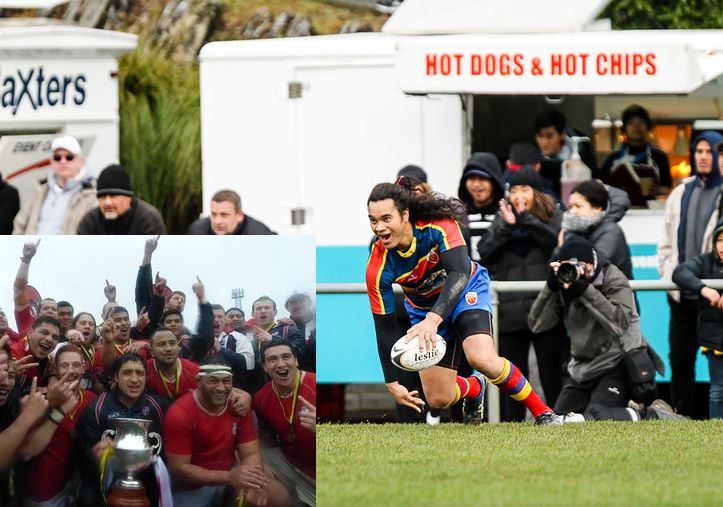 Above: Junior Togia scoring one of his two tries in the 2016 Jubilee Cup final against Marist St Pat’s, and, inset, MSP playing captain and try-scorer Kas Lealamanua with the Jubilee Cup in 2012 after their win over Ories. Tawa and MSP meet in the 2021 final on Saturday 31 July at the Hutt Rec.

Marist St Pat’s and Tawa meet in the 2021 Jubilee Cup final this coming Saturday. Kick-off at the Hutt Rec is 2.30pm.

A look at some of the big moments in recent Jubilee Cup finals, 2012-20 below.

2012: Long-serving prop Tighthead prop Jeff Toomaga-Allen was the Player of the Match and Kas Lealamanua scored the winning try and captained MSP to victory in the 11-8 win over Ories in an arm-wrestle in wet conditions. It was Lealamanua’s fifth Jubilee Cup win and 140th and final game for them.

2013: Steve So’oialo scored the try of the match in the final against MSP, minutes before halftime after a sweeping 80 metre movement. This gave Tawa a 14-13 halftime lead, which they would not relinquish and they went on to beat Ories 26-21.

2014: HOBM wing Chase Tiatia added to his try-scoring haul in 2014 (16 tries in total), igniting the home side’s comeback after Wainuiomata had led 8-0 at halftime. Halfback Sheridan Rangihuna would kick three penalties including the winner with about 10 minutes to play. HOBM won 14-11.

2015: The Old Boys University Goats fans and supporters were dancing in the Porirua Park stand after their team’s Wellington Lions centre Wes Goosen plucked a high kick out of the air and scored in the Porirua Park clubrooms corner to take the score in the Jubilee Cup final to 30-20 with several minutes to play MSP scored late, but OBU held on to win 30-27.

2016: Veteran Tawa back Junior  ‘Jet’ Togia retired in style after 18 seasons in Wellington club rugby. Togia played a vital role in Tawa’s 24-20 win over Marist St Pat’s, scoring two tries and helping set up another, all in the space of 60 minutes.  Togia scored the first of his two tries before rain set in and caused a much more forwards-focused game. Togia’s second try, started 60 metres out, was the better of the two. It came midway through the second half:

2017: Old Boys University became the first team since Tawa in 2013 to win the Swindale Shield, Andy Leslie Trophy and Jubilee Cup treble in one season, beating Hutt Old Boys Marist 32-19. They sealed victory when second five-eighth Regan Verney scored in the grandstand corner off a pass by fullback Jono Ihaka after another stunning breakout from inside their own half. Verney became the first midfield back to win the Jim Brown Memorial Medal as player of the final.

2018: Wes Goosen scored two tries in the 2018 final, including the match-sealer, but one of the popular tries of the afternoon went to halfback Matt ‘Unit’ Fowler. Fowler scored this try late in the first half to help OBU to a 25-3 lead at the break. Norths came back but OBU had enough points in the bank and won 37-31.

2019: Northern United won the Jubilee Cup for the fifth time, suppressing a spirited Wainuiomata 25-16. Jayden McCarthy scored this big try in the final that was a key play of the decider:

2020: fullback Sam Reid scored the first try of the final for OBU against Norths . A stable platform from a midfield scrum, 40-metres out, saw Callum Harkin pierce through the midfield and release the little flyer who dotted down for his 13th try of the season. Sabbagh converted from out wide to make it 10-3. OBU didn’t look back and won 22-14.