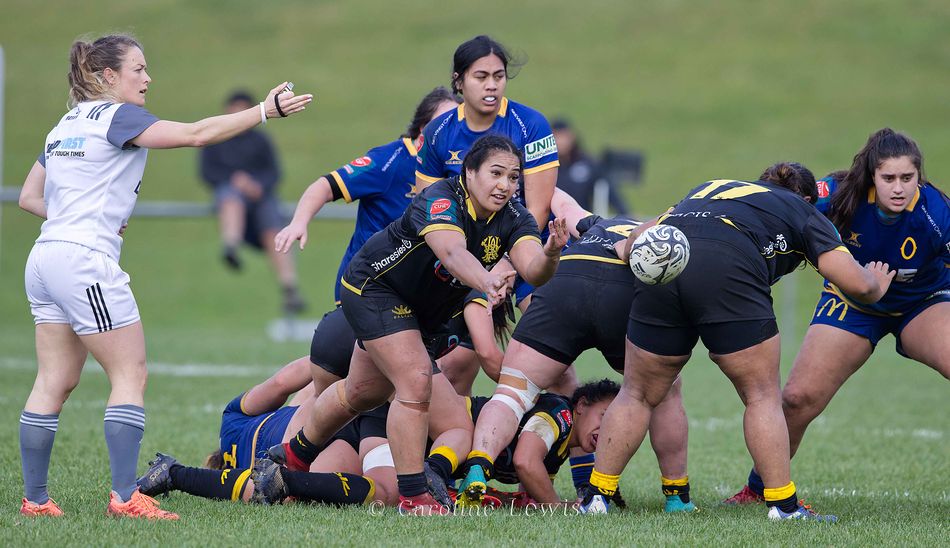 The Wellington Pride opened their 2021 Farah Palmer Cup campaign with a 13-5 victory over Otago at Jerry Collins Stadium this afternoon.

The match kicked off in inclement conditions with heavy rain and skies as dark as an afternoon in  Edinburgh. Despite the sun coming out later in patches, the handling of both sides was generally poor and continuity was a constant battle for both.

Otago lived up to their nickname by being spirited, and they essentially dominated territory throughout most of the first half. First-five Sheree Hume kicked the ball nicely and halfback Maia Joseph was lively and varied her options. Wellington struggled for any flow.

It was 0-0 until the last minute of the first half when halfback Ana-Marie Afuie took a quick tap and caught the Otago defence in retreat. From near halfway she fired the ball down the left wing side and wings Harmony Ioane,Lyric Faleafaga and fullback Thamsyn Newton combined, which led to centre Monica Tagoai scoring under the posts. It was a 60-metre showcase of skill and speed, and easily the highlight of the match.

The second half started with a Rasch penalty from straight in front, 15 metres out, to extend the lead to 10-0.

Wellington introduced some fresh legs off the bench, including energetic prop Barbra Taumoli and flanker Hosanna Aumua – younger sister of All Blacks hooker Asafo – and they added spark.

Rasch kicked a second penalty to make it 13-0.

This was set up by halfback Joseph, who took a quick tap, ran 20 metres, won another penalty, tapped and kicked ahead to the right wing for Daimzel Rongokea to score from.

From there, the game petered out

Other players to stand out for Wellington included captain Jackie Patea-Fereti, who was disruptive throughout and showed good leadership when required, blindside flanker Joanah Ngan-Woo, who grew in stature as the game wore on. In the backs, Tagoai was threatening on attack, while her midfield partner and strong defender Fa’asua Makisi left the field of play injured just before the interval.

Both teams left Porirua with plenty to work on. Otago play Auckland next weekend, while Wellington have their bye before facing Canterbury in Christchurch.

Both Auckland and Canterbury ran rampant in their season openers at home this weekend, Auckland putting away Bay of Plenty 44-12 and Canterbury dispatching Counties-Manukau 59-12.

Of note, Otago were stuck in Christchurch last night and flew in this morning. This match was originally scheduled for 11.35am but was pushed back to a 2.05pm kick-off.