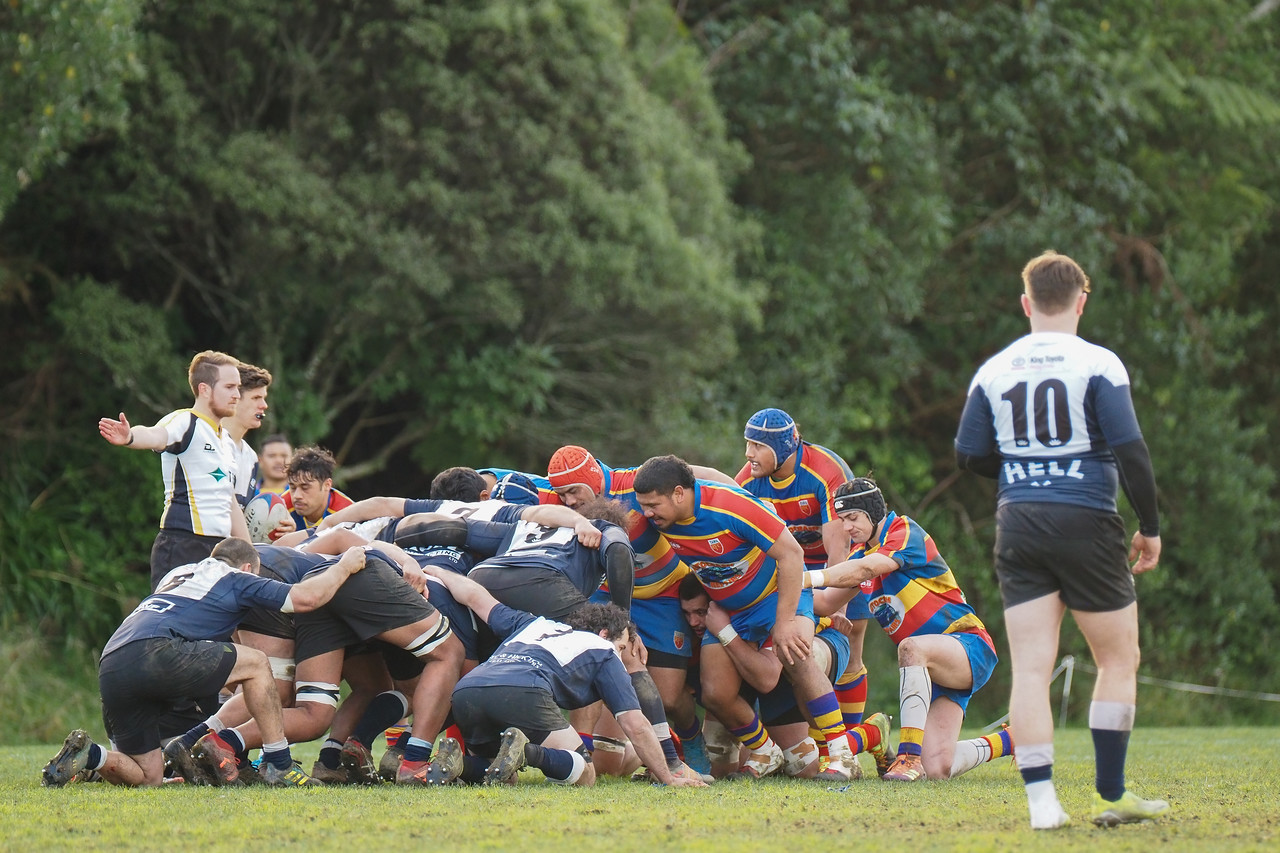 Petone and Tawa are both in action tomorrow, hoping to progress their seasons in the respective Hardham and Jubilee Cups. Petone hosts Paremata-Plimmerton and Tawa makes the trip to Miramar to play Ories. PHOTO: Stewart Baird.

Friday night edition: It’s a big day of club footy across the region with knockout games in both Premier championships as well as the top division of the Premier 2 grade, and the finals in both Colts divisions as well, so the pressure will be intense.

The big wildcard however will be the weather, with tomorrow’s forecast promising rain and extremely strong winds though these might both have eased by the time the Premier matches get underway.

One significant player milestone awaits tomorrow, with Norths’ talismanic and seemingly indestructible captain Parekura Lalaga playing his 150th game for their Premiers. Our congratulations to him.

Out in the city’s northwest, Old Boys-University find themselves in an elimination game a week earlier than they would have liked after HOBM’s last-minute heroics last Saturday. At least however they remain on home turf at Nairnville, but face the challenge of a rampant Norths side in not just a rematch of their opening round encounter (won 18-0 by OBU) but of last year’s Jubilee Cup final. The winner will head to Evans Bay next week and a meeting with Marist St Pat’s.

The Goats’ dip in form at this time of the season must be concerning for them, and now face the real possibility that their hopes of the double will end. To prevent that, they’ve stuck with largely the same side that started last week with just two changes; with both Kyle Preston and Matt Fowler unavailable Callum Harkin starts at halfback and Josh Ranui slots in at centre in place of Wes Goosen.

Confidence won’t be an issue in the Norths camp with the win over Wainuiomata their sixth on the bounce since they fell to Ories, and will fancy their chances of moving on. They also have just two changes with Kevin Vaeluaga back in the engine room and Luke Kapene at fullback replacing TJ Perenara.

Across town at the Polo Ground there’s the rematch of another early season clash. Oriental-Rongotai and Tawa fought out an 19-all draw when they met back in round two, and there’s little to suggest there will be much more than that in it tomorrow with the winner moving on to face Hutt Old Boys Marist at the Hutt Rec next week.

Ories will look to rebound from last week’s loss to MSP at set course for the semifinal. Connor Lemon, John Tuia, and veteran Paulo Aukuso return to their side with Poasa Poasa and Alex Fidow dropping to the bench.

Tawa stick with the same starting XV that comfortably saw off Petone a week ago, with their sole change being on the bench with Philip Finau replacing Sam Taufa. Kemara Hauiti-Parapara and Luke Cummings are again tasked with steering the side around.

The finals format means that it’s a full round of quarter finals in the Hardham Cup, with the bottom-six sides joined by Petone and Wainuiomata after their losses in the Jubilee Cup elimination matches last week.

After last week’s disappointment Petone now need to refocus and move on, and will have a great opportunity to do that back home on the Rec against Paremata-Plimmerton. The Villagers injury list is a lengthy one and as pointed out here in Monday’s column they had an entire XV of players unavailable to them, though their onfield woes on Saturday were largely due to an inability to secure quality ball as Tawa squeezed the life out of their attack. Regan Waiwai was badly missed last week and returns, with Jack Ross returning from injury in their pack and Dylan Williamson switching to the back of the scrum.

Pare-Plim will go in as sizable underdogs as their winless season was extended with their loss to Poneke, though they will take heart from getting themselves back into the game after another slow start before the score blew out late on. They make several changes to their starting side for tomorrow with returns for Peni Taupau, Luke Omeri, and Blake Neve amongst others.

On the same side of the bracket, further north the Upper Hutt Rams host Johnsonville at Maidstone Park. The Rams did what they had to last week and avoid defeat, but were given a stern challenge by Avalon. The visitors were the only side to improve their position, which meant trip here rather than Kilbirnie, but after overturning the Swindale result against Wellington, the Hawks will look to do the same after the Rams won their earlier match 23-19 back in the opening rounds.

Tafa Tafa starts at 10 for the Rams which allows Josh and Todd Svenson to reunite in midfield with Scott shifting to the wing to accommodate Tajun Crosland-Misa at fullback. Johnsonville are almost unchanged, with Aukuso Tuitama on the wing in place of Knox Tuinasau the only change in their starting five.

On the other side, Wainuiomata face the same challenge as Petone to pick themselves up though they can look to defend the Hardham Cup they won last season. Their issue of the moment is on the defensive side, having conceded over 90 points in those last two matches. They too return home with Avalon the visitors and while the Wolves won’t be the favourites, they’ll know that they’re capable of the upset if they can build on pushing Upper Hutt last week. They make a handful of changes with returns to the starting side for Phil Green and Damien Madsen amongst them.

Wainuiomata make a number of tweaks to their line-up from the one that lost to Norths last Saturday. Veteran player-coach Daniel Farani had a storming match at lock against Norths and he moves to No. 8, with Sam Smith dropping out and Tustasi Masoe switching from the other locking position to blindside. An entirely new front row sees Pala Mailangi, Dion Lealofi and Kade Tiatia come in to the starting XV, while in a couple of notable changes in the backs sees Teru Time drop out and Tyler Tane come in to second-five. Former Avalon player Chris Aumua is missing too, but Peter Umaga-Jensen lines up at centre again.

Only one of the Hardham matches is out of the Hutt, and that’s east of the Mt Victoria tunnel where neighbours Poneke and Wellington clash at Kilbirnie Park. The two met back in the opening round where Poneke were crushing 68-5 winners, and after their respective results last week will be favourites once more.

With four wins now on the bounce, Poneke will look to add to that and survive another week. After a false start last week, Galu Taufale returns this time – replacing Jack Loader – and is joined in the starting side by 200-gamer Ben Huntley. Pakai Turia makes his 99th start in the red and black hoops. The Axemen know they’ll have to be better than last week to continue, and they start a pair of Poneke nemesis in midfield in former MSP duo Jay Cameron and Ahtun Masun, and Davis Eni earning the start on the openside.

Note that all six matches are at the slightly earlier time of 2.30pm in case extra-time is required.

Two of the three trophies being handed out this weekend are in the Colts grade. We previewed the Division 1 John E Kelly Cup final between Petone and Old Boys-University Green at the Petone Rec 2 on Wednesday – link at the bottom of this article – with Petone looking to reclaim the title they last held in 2017 – when that years side rode bullocking prop Kaliopasi Uluilakepa to victory ironically over OBU at the Petone Rec – while OBU are looking for their fourth title in succession and their eighth since 2012.

Further north and later in the day is the Division 2 decider for the Vic Calcinai Memorial Cup, donated in memory of the longtime Poneke player and coach. The Upper Hutt Rams will host it, after they emphatically reversed their final round-robin loss to Poneke by thumping that same opposition 59-0 last week. Fullback Ben Mexted scored nearly half their points in that match and he figures to be an important part of their chances tomorrow. They’ll host the decider after Paremata-Plimmerton knocked off top-qualifiers Avalon 30-17 in their semifinal, and the confidence amongst the Ngati Toa side will be sky-high. Prop Ted Northcott and No8 Fuli Kupa are their big ballcarriers and centre Patrick Malu will be a big threat to the Rams in midfield.

The two Premier 2 divisions are now at different stages of their season. The Division 1 Ed Chaney Cup is at the playoff stage with all eight teams involved in quarter-final, knockout footy, this week. Top seeds Tawa (1) and Norths Blue (2) will be heavy favourites at home against winless pair Poneke (8) and Ories (7) respectively, while in the other two games HOBM (3) host their Marist brethren MSP (6), and the Upper Hutt Rams (4) are on home turf against OBU (5).

The Division 2 HD Morgan Memorial still has two weeks to run. Leaders Wainuiomata (31) will look to secure top spot ahead of next weeks bye when they host Petone White (6). With Norths White (28) on the bye, Petone Blue (26) will be after second when they travel to take on Pare-Plim (9), Johnsonville (18) travel to face Avalon (9), and Stokes Valley (21) are back home for the visit of bottom-side Wellington (1).

The Under 85s reach their final round with just one place in the playoffs across both divisions yet to be found. In the Division 1 Paul Potiki Memorial Avalon, Johnsonville, and Eastbourne are already through to next week, with either the Upper Hutt Rams or Poneke to join them. Poneke needs to win but head to Eastbourne, so anything less will see the Rams, who host Johnsonville, go through regardless. Avalon head into the city to face already-eliminated MSP looking to retain top spot on the table.

In the Division 2 Tony O’Brien Shield the order of the top three remains to be decided. The OBU Scallywags are in the box seat for top spot and they’ll face already-eliminated Wests at Ian Galloway, while Wellington and Stokes Valley clash at Hataitai. HOBM have the bye, and are already assured of fourth.

The third trophy at stake is the John Davies Cup, which is the prize in Division 1 of the Reserve Grade. That will be settled tomorrow when eastern suburbs rivals the Ories Vatos and Poneke Ruffnuts meet at the Polo Ground in the curtainraiser to the Jubilee Cup match, which we previewed here yesterday – link at the bottom of this article.

There isn’t any College rugby owing to it being the school holidays, but there are still two matches on tomorrow. The Naenae and Taita 1st XV’s meet in their annual Avalon Cup match, while St Bernard’s host Auckland school St Paul’s.

The Wellington Pride get their season underway on Sunday when they face Otago in their Farah Palmer Cup opener at Porirua Park at 11.35am. Its an experienced starting fifteen skippered once again by Black Fern Jackie Patea-Fereti, with five new caps; Norths’ Harmony Ioane is the only one in the run-in side, with four more on the bench.

That match will be followed at 2pm with one between a Western Bays selection and a Hutt Valley side.

The Pride and Otago teams are:

Our Colts and Reserve Grade Division 1 finals previews are below: