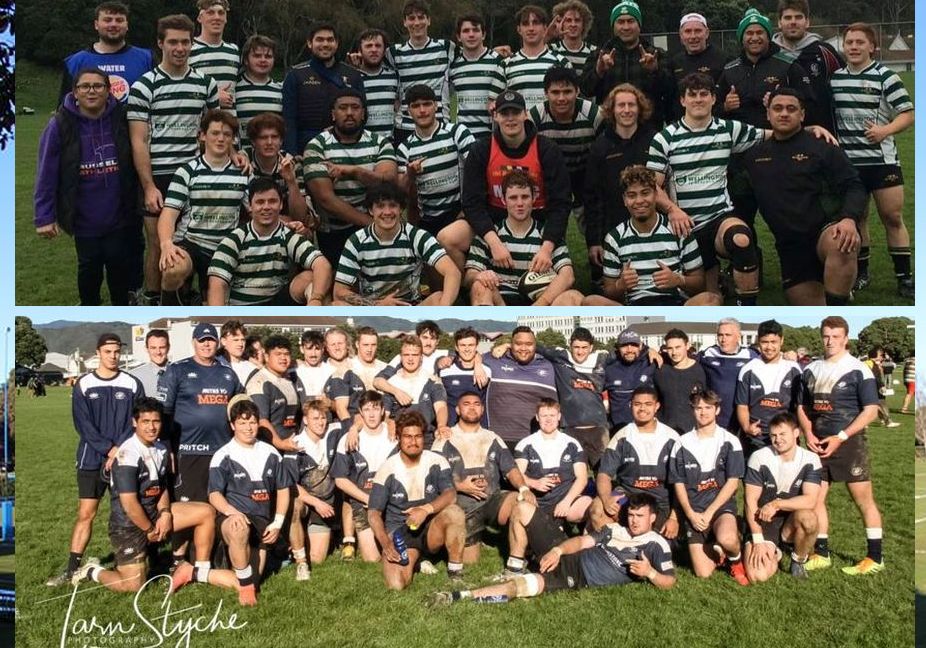 Their most recent meeting three weeks ago was decided by an 86th minute winning penalty. The re-match in this Saturday’s Division 1 Colts final between Petone and OBU Green promises to be just as tight.

The late penalty that day gave Petone a 13-10 win and helped propel them to the top qualifier’s berth for the semi-finals and on to the final this weekend at home at the Petone Recreation Ground at 12.30pm.

Both squads for the final are laced with talented players, some of whom have already played Premier rugby this year and others who will do so in future seasons (see squads below).

OBU Green are this grade’s perennial pacesetters, having won the last three Colts titles and seven of the past 10.

OBU are also the first-round winners of the Paris Memorial Trophy, having retained that for the third straight year.

Petone’s sole championship win in this grade over the past decade was in 2017, when they beat OBU 36-20 in that year’s final, also played at the Petone Rec.

Prior to that, Petone last won the John E Kelly Cup in 2007.

Their meetings this year have been split one apiece, with OBU winning 38-21 in the first round in mid-May and Petone winning by a point three weeks ago.

Petone co-captain Ollie Wrigley said his team must maintain their focus against an OBU team with such a rich winning tradition.

“The semi-final was a strong performance, we were able to absorb a lot of MSP pressure early in the game as well as apply our own pressure on defence, which led to a few early tries, “Wrigley said.

“To win this week we will have to provide another valiant effort on defence and not switch off in patches like we tended to do against MSP.

“OBU are big game players and teams have to put in a big 80 minutes to have a chance.”

Wrigley said that Petone’s line-up and form at times has been inconsistent in both the forwards and backs divisions this year but they feel they have got their balance and cohesion gelling now.

“Our strengths are our strong loose trio who are able to make metres to set a platform for the backs, as well as Brad Pritchard who plays in the loose and at lock. Rory Woollett drives the forward pack hard from halfback, Tjay Clarke is a cool head in the backline who organises the team well too and Leyton Tapa has a safe pair of hands at the back.

“Regan Shaw has become an impact specialist, always coming off the pine and doing something that impacts the game for us.”

Wrigley added that hometown support will be big for the team.

“We hope the whole of Petone are out there on Saturday. We have had great support all year from our friends and family. Our club has been great as well as the senior players at our club looking after the young men.”

The Petone Premiers follow on No. 1 against Paremata-Plimmerton in their Hardham Cup clash at 2.30pm.

OBU Green captain and blindside flanker Dan Livingstone said this past weekend’s semi-final win over Tawa was good preparation for his team ahead of the final.

“The nerves were high before the semi-final,” he said. “We knew they had made good preparations and adapted to some of our strengths before playing us. With some variation in our game-plan we managed to come away with the win but Tawa had a ‘never go down without a fight’ attitude. To win this year’s championship, it’s going to come down to who wants it more on the day, I know my boys are hungry for a W but Petone have proven to be just as ready to take out the comp.

Livingstone said it OBU’s pack could be key for their chances.

“With the potential for the weather to turn south this weekend, it may come down to our forward pack to roll their sleeves up and get to work this weekend. The forward pack as a whole has been a strength of ours this season, but it won’t mean anything this weekend without the direction and accuracy from our backline.

“Key roles this weekend in the back line will be our first five to direct the forwards and our full back keeping good communication with the rest of the back line organising our D and keeping vision across the field.”

Like Petone, OBU’s supporters will be well received by the players on the field.

“The supporters give us a huge boost in confidence while we are on the field. Hearing the support from families and friends of the club play a massive role in helping us win on the day. I hope to see lots and lots of fellow billy goats out there on Saturday.”

Livingstone said that the legacy of the OBU Green jersey is also a driver in their hoped-for success.

“Our coaches have always talked about the players that have come before us and played in the same jerseys that we are playing in. We are not just playing for them and trying to uphold the high standard that has been set before us but it’s our chance to leave our own legacy in the jersey, pass it on to future members of the club and have them look up to us and remember what we did while wearing that jersey on our backs.”

The John E Kelly Memorial Cup was donated to the WRFU by the Wellington Football Club for play in the Under 21 Division 1 Competition in 1985. The trophy is in memory of Wellington’s late Club Captain, John E Kelly, who died of cancer. John played and administrated rugby with the Wellington Club for many years and had the privilege of playing alongside his young son.

The past 10 winners have been:

Petone (from, with former schools in brackets)

OBU Green (from, with former schools in brackets)