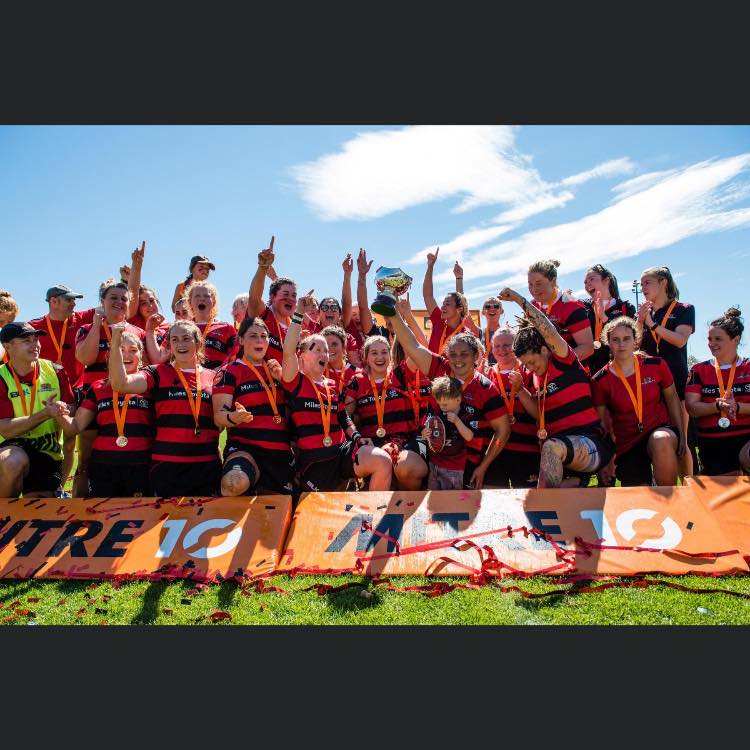 Cindy Nelles arrived in New Zealand in August 2018 with a big reputation. Since 2014 she had been a Canadian international, and a year earlier had competed at the World Cup.

A text she sent to the Canterbury coach asking for a place in the team went without reply.

Three years later, in the 2020 Farah Palmer Cup final, Canterbury secured a fourth consecutive National title with an 8-7 win against Waikato. Nelles scored the winning try in the 81st minute.

“It was a moment of clarity in a match where there weren’t many. What is going to happen if we lose, I kept thinking? We lost the lineout and then we got it back. I tried to focus on my role. I saw a gap in front of me and was hoping Kendra (Cocksedge) saw it too. Pip Love was on her inside. It was six of one, half a dozen of the other with two forwards to pass too. When I got the ball and hit the hole it was pretty surreal. There was lots of celebrating afterwards.”

Nelles has played 15 games for Canterbury without defeat

“The culture is right up there with the best I’ve been a part of. It’s a competitive environment but supportive at the same time. New players are fostered by the older girls. It is a safe place to try new things. Failure can happen as long as it’s fun and learning is to be had.”

In her hometown of Belleville, Ontario, Nelles was a quick sports learner. A gifted volleyball and ice hockey player she took up touch rugby at 10, eventually graduating to full contact.

It was at McMaster University where her rugby began to thrive. Standing 1.84cm she proved to be a natural fit at lock. In 2011 she was named McMaster Marauders rookie of the year. In 2013 she was an All-Canadian selection and a year later was picked for Canada who were runners up to England at the World Cup.

“I made my debut against the USA before the World Cup. I was brought in as injury cover and stayed with the squad. We had to pay for that US tour. Since then, they’ve covered expenses, and on one tour we got bonus fees, but we have to seek time off work to play.”

In 2015 she captained the Marauders to their first-ever Canadian Interuniversity Sport national title and was named the Most Valuable Player at the national championship tournament held in Kingston. She scored two tries in the final.

She has since amassed 19 tests for Canada, including an appearance at the 2017 World Cup and tussles with the Black Ferns.

“I first played the Black Ferns in Whakatane in 2014. Again, I was called in as injury cover.  The first time I saw the haka I thought, ‘okay panic now.’ I still get goosebumps when I see it on TV.

“The Black Ferns are the benchmark for international rugby, so they bring out the best in you. Rugby is so intertwined with Kiwi culture that it gives you a competitive edge. It’s not like North America where ice hockey, basketball and football are the mainstream sports.”

A Civil Engineer, employment prospects and a “new adventure” brought her to New Zealand.

The University Club was welcoming and eventually the Canterbury selectors took notice. Nelles made her debut in 2019 against Wellington and scored two tries in a 57-19 win.

“My first season was really good. I got lots of game time and had to prove to myself which gave me an edge. The draw wasn’t reshuffled because of Covid which meant tougher games and less disruption.”

In 2020 University won the Christchurch senior championship and Nelles played all seven matches for Canterbury, scoring six tries. The epic Waikato final even caught the attention of All Blacks legend Wayne Smith.

“It was one of the most exciting games I’ve seen. The willingness of both teams to play expansively was outstanding, despite the pressure of the final. I was emotionally invested in the outcome. Waikato’s James Semple is a fine young coach I’ve had a bit to do with so I wanted him to do well, but then of course I wanted Canterbury to win too,” Smith said.

“I’m grinning from ear-to-ear hearing that. I guess it shows women’s rugby is an exciting product worth investment. Here in New Zealand I know the women are fully committed. I guess that passion comes out in training and performance,” Nelles concluded.

Nelles has struggled with concussion since April but is determined to make the 2022 Canada World Cup team. The rugby season was cancelled in Canada but the National team is training.

Canada is one of six “core teams” in the World Rugby Sevens Series. Since 2012 they have won five tournaments and finished runners up nine times. They receive Olympic funding.

Heather Moyse was the top try scorer at the 2006 and 2010 World Cup tournaments. She represented Canada as a track cyclist and won two gold medals in Bobsleigh at the 2010 and 2014 Winter Olympics. In 2016 she was inducted into the World Rugby Hall of Fame, the only Canadian women in the Hall. Farah Palmer and Anna Richards are the Kiwis inducted. Nelles remarked:

“She’s phenomenal, a good, powerful athlete who many average Canadians know. It’s awesome she’s in the Hall of Fame but there’s potentially half a dozen good candidates I’ve played with who I reckon deserve to be in it too.”

Lions to defend the Jonah Lomu Memorial Trophy this weekend