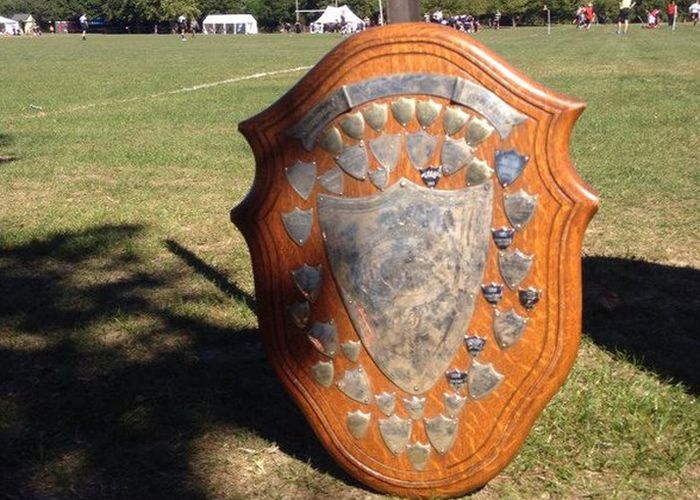 The top try scorers at the end of the first round – Luca Rees is the Swindale Shield’s top try scorer for three of the past four years. See below for more.

The closing chapter of the first round has been written and the Swindale Shield takes pride of place in the Cambridge Hotel for the next 12 months.

The Old Boys University Goats have won their third Swindale Shield, following their maiden win in 2016 and their second in 2017.

OBU and MSP finished equal on 56 points but OBU take the 2021 title because they won 20-18 in their head-to-head meeting in Round 5. MSP had the superior points differential record, having scored 532 points in 13 matches and conceded 168 against OBU’s 494 points for and 168 against – the same points against tally.

In 2016 OBU went on to finish fifth in the Jubilee Cup and in 2017 kicked on to win the championship title as well.

OBU’s Swindale/Jubilee double win in 2017 is just one of five seasons since 2000 that the Swindale Shield winner has gone on to win the Jubilee Cup later that same season. The others in this period were MSP in 2008 (Jubilee shared with Norths), Norths in 2006 and 2010 and Tawa in 2013. Can OBU add to this record? We will find out on the afternoon of Saturday 31 July when this year’s final takes place.

OBU are the defending Jubilee Cup champions as well, so seven teams will spend the next month plotting their path past them and to championship glory.

A look at the final points table from this year’s Swindale Shield sees the top eight and bottom six sides that will start the respective Jubilee and Hardham Cup rounds the same teams as last year. There is movement up and down from last year amongst the top 8 teams, but places 9, 10 and 11 stay the same and the bottom four clubs stay the same and it’s just their finishing order that changes.

The biggest rise in places year-on-year from 2020 was Ories who have gone from seventh to third and the biggest drop is Petone who fall from second to seventh.

Ories ended the first round as Bill Brien Challenge Cup holders, and will defend it next in their first home game of the Jubilee Cup round, but this won’t be this weekend as they play MSP away.

MSP scored 50 points or more in a match on three occasions and reached the 40s on five other occasions. Their lowest score in a match was 18, the game they lost to OBU that ultimately decided the first-round silverware. Marist St Pats lost two games by a combined margin of three points.

At the other end of the table, winless Paremata-Plimmerton conceded 589 points and scored 175.

This is the fourth consecutive year that the bottom placed team lost every game, following on from Johnsonville in 2018 and 2019 and Avalon in 2020.

Paremata-Plimmerton, Johnsonville and Avalon have all lost 32 games since 2019.

Overall, a cumulative total of 4,771 points were scored in the 91 games of this year’s Swindale Shield, at an average of 52.4 points per game.

There were 674 tries scored in this year’s Swindale Shield, at an average of 7.4 tries per match.

The fewest tries scored in a single round was 26 in round 11 (and forwards scored 13 of those tries). The most tries in a round was 60 in round 9.

The highest score posted by a losing side in the first round was 37, by Tawa in their 37-39 loss to HOBM in round 10.

There were three matches that were decided by just one point, these being Petone’s 18-17 win over Poneke in round 2, Wainuiomata’s 25-24 win over Norths in round 7 and Wellington’s 8-7 edging of Pare-Plim in round 10.

OBU and Ories have won the same number of games (87) in the Swindale Shield since the start of 2011.

Individually, Norths No. 8 Luca Rees was the top try-scorer with 13 tries. Rees started at the back of the scrum in all 13 of Norths matches and he scored two tries in a match on three occasions.

Rees has topped the try scoring charts three times in the last four years (see table below). He has scored 52 tries between 2018 and 2021.

Another loose forward, James Tuia (MSP), was second with 12 tries, ahead of his teammate and outside back Ryan Setefano with 11.

In his last 44 games James Tuia has scored 36 tries.

Three of the top six individual try scorers were forwards.

The top points scorer in the first round was OBU fullback Sam Reid with 153 points, more than HOBM’s Brandyn Laursen with 141, Norths’ Dale Sabbagh with 129 and Petone’s Carne Green with 103.

There were 15 individual hat-tricks scored in the first round Swindale Shield.

Two of these hat-trick bags included instances of a player scoring four tries or more in a match. These two players were MSP’s James Tuia who scored 4 tries against Poneke in round 4 and Petone’s Riley Higgins who crossed for 4 tries against Pare-Plim in round 9.

As well as these match hauls of three tries or more there were a further 70 instances of a player scoring two tries or more in a match. Several of these braces were scored in the same match, but an entire round (round 11) saw no doubles at all.

Special mention to Josh Robertson-Weepu, who is joint fourth on this list (with MSP’s Andrew Wells) with him scoring 23 points for Wainuiomata in a losing cause against HOBM (lost 23-28) in round 5.

The leading try-scorers from each of the first rounds over the past 15 Swindale Shields have been:

The leading points scorers from each of the past 15 Swindale Shields have been:

Roll on the Jubilee and Hardham Cups!