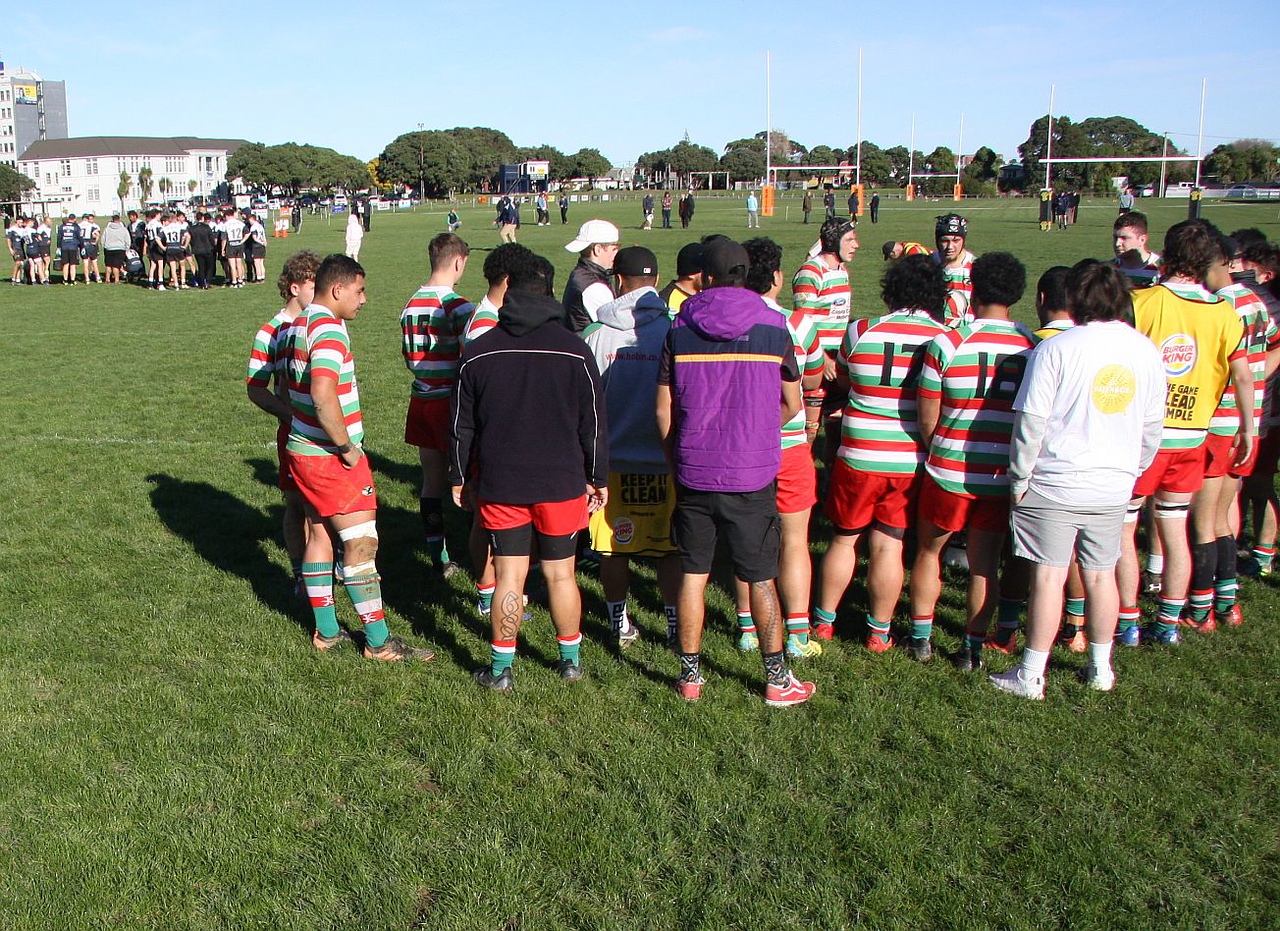 Halftime in the Colts match on Saturday between Petone and HOBM. Petone won 29-26. PHOTO: Warwick Burke.

UPDATED: It is the start of the second round this coming week in the Premier grade in Wellington club rugby, with the opening weekend of matches in the newly rejigged Jubilee and Hardham Cup competitions, plus the Colts semi-finals.

Premier competition matches at a glance this Saturday:

As well as the Start of the Jubilee/Hardham Cup grade, the Colts semi-finals this coming Saturday, it is also the Reserve Grade John Davies Cup Division 1 semi-finals. These will see unbeaten Ories (1) play the Upper Hutt Rams Pirates (4) and Tawa (2) meet the Poneke Ruffnuts (3).

It will be the seventh round of the Wellington First XV competition, before a two-week break for school holidays. Four of the five games are on Saturday (Wellington College v Mana College on 24 July) and the feature clash is Scots College v St Pat’s Silverstream.

The Quadrangular Tournament is in Christchurch this week, on Tuesday and Thursday. Games are being livestreamed, but behind a paywall so unwatchable for the community rugby audience.

No boys midweek rugby this week in Wellington, but a full round of girls games scheduled. In Girls Premier 1 on Wednesday afternoon, Sacred Heart College plays Wainuiomata High School, Kapiti College meets Wellington East and St Mary’s and Tawa play each other.

An extended highlights package of Saturday’s Premier match between Hutt Old Boys Marist (26) and the Upper Hutt Rams (26) is now up at Mike Lewis Pictures at https://mlpictures.co.nz/videos/

Old Boys University won the Swindale Shied for the third time. They have won 90 of their last 115 games.

Marist St Pat’s beat Wellington 54-12 on Saturday. They also beat Wellington in the last round of the 2020 Swindale Shield to earn themselves a shot at first round honours.

Oriental-Rongotai have won six games in a row and MSP five. It shapes as the best game of this coming weekend.

A bumper 30-strong Wellington Pride squad was announced by WRFU last night on social media (media releases are not this organisation’s thing) following Saturday’s trial at the Polo Ground. Unsurprisingly the squad is dominated by players out of the Division 1 sides with champions Ories and runners-up Norths leading the way. There’s a couple of notable additions with returns for Georgia Daals (last of OBU) and Elizabeth Goulden (Ories) who have been overseas in recent years, and some omissions including Janet Taumoli, Alice Soper, and Montana Heslop although the latter is currently in Hong Kong.

The squad, which will again be captained by Jackie Patea-Fereti, is in full:

The Darren Larsen Trophy for matches between Petone and Wainuiomata fits six Heinekens.

Former Maori All Black Hoani Tửi played his first club match in a dozen years for Petone against Wainuiomata. The prop is 37-years old.

Alapati Soke received his blazer at Petone for 50 Premier games.

Riauviana Taulealo, Hope Hakopa and Hope Sa’u all received their blazers for 50 games for Petone. The speeches were moving and funny. A real showcase of strong culture.

Great to see at a Kilbirnie cafe over the last couple of weeks Wellington rugby legends Andy Leslie (Petone), Kevin Horan (MSP), Grant Batty (MSP), Robert Gray (MSP) and Mark “Twiggy” Sayers (OBU) gathered to exchange stories and tell a few lies. Over 450 games for Wellington when playing for your province was only as important as playing for your club.

Also great to see Tomas Roche as his assistants stamping out sideline abuse. A prominent Wellington (Axemen) supporter was given his marching orders from the ground after verbally abusing Roche’s female assistant when a Wellington player was sinbinned.

Reports of some carparking woes for some on Saturday, with Hataitai Park initially full to the gunnels for early arrivals owing to netball, and unsubstantiated talk of parking wardens in suburban Khandallah going after easy prey in the streets around Nairnville Park?

No, the eyes weren’t deceiving those who arrived at the Hutt Rec during the HOBM v Upper Hutt Rams Premier 2 game on Saturday, that really was Mark Fairmaid – the WRRA’s Appointments convenor, delegate to the WRFU, and father of Premier referee Jamie – in the middle. Fairmaid Snr had taken over from the appointed referee, former Avalon player Stephen Cross, after the latter suffered an injury and finished out the match (won 28-26 by the home team). Adding to the surreality of it all were who had the two flags on the sideline; longtime WRRA Chairman Ian Dallas and former Premier referee and current Silverstream sport supremo Warwick Bowden.

Also scarcely believable were reports that longtime Pare-Plim stalwart Tane McMillan-Parata scored a try in their loss to Ories off his own kick ahead. However our network of spies have told Club Rugby that he was seen practicing that very thing during the club’s nursery grade session on Saturday morning.

Unfortunately, Tonga were out of their depth against the All Blacks who could have played the Maori instead?

In Taranaki, top qualifier Inglewood will host neighbours Stratford/Eltham at TET Stadium and Tukapa will play Coastal at Sanders Park in the two Premier club rugby semi-finals this coming Saturday.

Reported on social media on Sunday was that Tyrone Thompson, dynamic MSP and Wellington Lions hooker, has possibly signed a deal with the Chiefs in super rugby for 2022 and beyond.

Why is Naitoa Ah Kuoi playing his provincial rugby for Bay of Plenty this year? Everyone thought he had an outstanding Super Rugby campaign, so a tad disappointing that Wellington have let him go.

Ma’a Nonu to play for Ories this coming Saturday in the first round of the Jubilee Cup?

A shame the New Zealand U20s can’t travel to Australia for their scheduled junior internationals.

A new domestic programme for this team sees them playing the following three matches:

The latest Rugby News magazine is out now:

Taita College got its first All Black on Saturday, when George Bower took the field during the Test against Tonga. Bower is out of the Avalon junior club but has been based in Dunedin all his senior careeer where he studied and then played for the Highlanders. The other recent international out of that school is Brad Shields who played a handful of internationals for England.

Still in Auckland, Ponsonby eased past Ōtāhuhu 99-7 on Saturday to seal the top qualifier’s berth in the championship. They will play one semi-final against Eden and College Rifles will host Grammar Tec in the other. College Rifles were found guilty and fined $15,000 recently for paying a player to play.

Welsh wing Josh Adams scored four tries as the British and Irish Lions opened their tour with a a 56-14 win over South African domestic team the Lions this past weekend.

In 2023 Rugby World Cup qualifying news, the opening round of the Rugby Africa Cup saw the Ivory Coast register a 24-13 victory over Namibia, whilst Senegal defeated Kenya 20-19. It was a late converted try for Senegal that ultimately proved decisive as they claimed victory over a side more than 20 places above them in the World Rugby Rankings. The shock losses mean both Namibia and Kenya must win their second fixtures to keep alive their hopes of making it to France 2023. Namibia are due to play Madagascar on Wednesday while Kenya next play on Sunday, 11 July, against Zambia. Read more HERE

In Southland, the Southland Racing Club is a new sponsor of the Southland Stags rugby team this year – meaning one sporting code is sponsoring another. Perhaps the Phoenix could sponsor the Wellington Lions?

From the vault: 11th round matches in photos