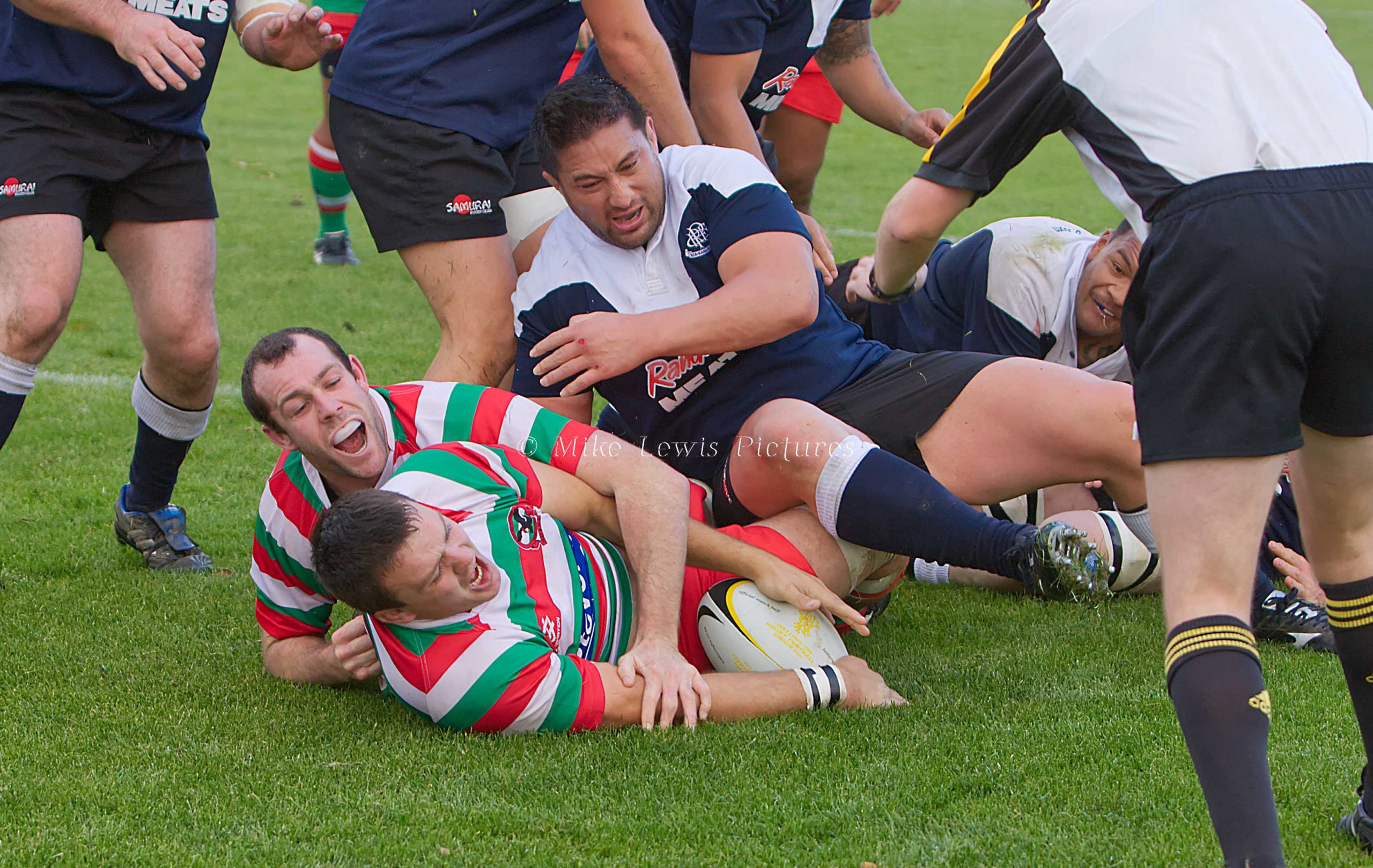 This photo goes back to 2013, the HOBM-Petone McBain Shield clash of that year.

HOBM lock James Wall crashes over to score one of his two tries that day against Petone, in a comprehensive 50-22 win.

Openside flanker Jason Risdon is over the line with him in support, while veteran Petone tighthead prop Thomas “the tank” Tupuivao can’t prevent the try and Mateaki Kafatolu is in the background perhaps having missed the tackle.

Try-scorer Wall played lock for the Eagles on this day, but also played approximately half of his 34 matches for them between the 2013-16 seasons at blindside flanker. This was his seventh start. He had previous played for Upper Hutt between 2010-12 and was a Wellington U20 player in 2011.

The previous week HOBM had beaten minnows Rimutaka 127-0, while Petone were coming off a 25-24 win over Poneke.

HOBM’s fourth consecutive McBain Shield win was a record for them over Petone in this match that dates back to 1934.

It was a windy day, but the rugby was sharp at the Eagles’ lair as HOBM made no race of their biggest interclub match of the year.

HOBM played breathtaking rugby in the first half in winning 50-22. The Eagles ran in seven tries to dismember Petone’s challenge and take the maximum competition points in some style. HOBM led 36-3 at halftime, but there was no solace for the Villagers after the break with the wind in their favour.

Individually, wing three-quarter James Kusel scored four tries – to go with his hat-trick the previous week week against Rimutaka – while Wall bagged his brace and fullback Brandyn Laursen scored their other try and kicked 15 points, sailing past 159 for the season in just eight matches thus far. He would score 192 points by the end of the first round.

As far as the Mcbain went, Petone were not down for long, they beat HOBM 20-19 the following year in this match.

As far as the rest of the 2013 season went, HOBM finished third in the first round Swindale Shield and Petone sixth, behind first time winners Tawa. In the subsequent Jubilee Cup, HOBM would beat Petone 20-0 and HOBM would qualify second for the semi-finals and Petone would fail to win a game. In their home semi-final, HOBM lost 27-30 to Ories in the famous 100-minute match.

Highlights and report: Wellington and Manawatu draw in NPC pre-season