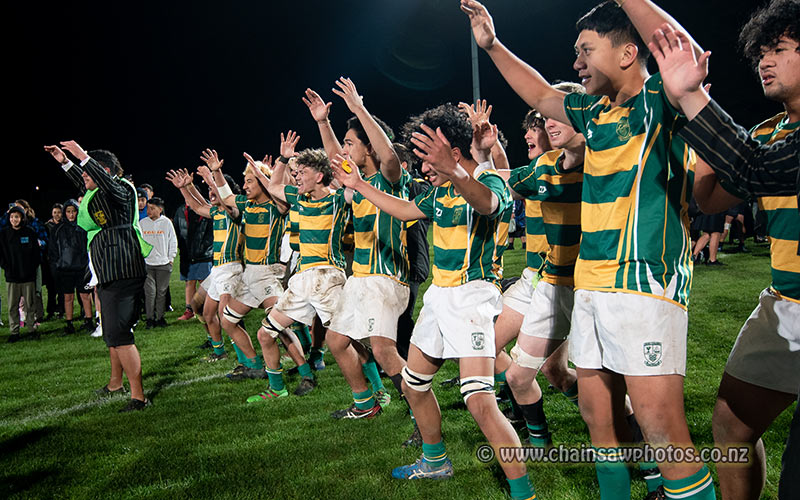 Wellington College beat Rongotai College in their annual traditional, Mana College locked the Beard Trophy away for the year by beating Aotea College and the New Zealand U20s beat a composite Wellington side in a trial/warm-up fixture, in three fixtures today.

Wellington College have regained the Heron Trophy and completed a clean sweep of their local traditional rivals with a 34-0 victory over Rongotai College.

In clear, chilly conditions, Wellington led 15-0 at halftime and resisted a Rongotai charge shortly before and after the interval to briefly move into pole position in the Premiership.

Wellington was quick to gain scrum ascendency and were able to find holes on the short side of the Rongotai defence.  First-five Stanley Solomon opened the scoring with a penalty before the visitors cracked when wing Josh Williams crossed following fast hands and an overlap.

Williams was in damaging form throughout. Repeatedly he dented the Rongotai wall and scored his second try, swatting aside his immediate marker. It would be the settler, leading 20-0 Wellington weren’t going to be passed.

Wellington hooker Michael Jacobs has been a steady improver and his try ranging wide earlier stretched the hosts advantage to 15-0.

Rongotai fullback Moli Taulogo and centre Pharrell Gray were their most threatening outside backs. Coupled with rare forward momentum Rongotai almost scored before the break. Unfortunately, Wellington would be too dogged.

Williams completed his double in the 45th minute while the bruising bustle of No.8 Ashton Teau was a highlight and his try was rich reward for a standout display. Openside Bailee Laursen-Tupai is a key figure. Sam Hickey (lock), Ben Gordon (second-five) and Sam Meo (wing) all debuted for the First XV.

Rongotai’s No.8 Junior Meafoou tried hard and Ezrah Sua hurt in the tackle at least during the first 35 minutes.

The Heron Trophy was founded in 1988 and Wellington have won 25 of the 33 meetings.

Mana College will keep the Beard Trophy for the rest of 2021, foiling Aotea College 27-13 in the last challenge of the season.

Mana jumped to a 17-0 lead in as many minutes and despite a yellow card before halftime and a sustained period of pressure by Aotea in the second-half, Mana was the more authoritative when it really mattered.

Aotea held possession initially but took audacious risks inside their own territory which allowed Mana to gain an edge in the set pieces. The first try was scored by Mana lock Henry Newbery after phases were built and forward attrition paid off.

The second try was the highlight of the match. Aotea broke out from their own quarter only to fumble near the Mana 22. Mana protected the loose ball and excellent halfback Israel Huddi-Ray chipped into vacant pasture for flying fullback Jonty Baker to purse. The bounce was accommodating and that tested the corrugated iron at the back of Jerry Collins Stadium. Delirious Mana fans slapped it as hard as a Jerry tackle.

Bruised but not broken, Aotea scored through blindside Jack Vincent. His try was provided by second-five Rueben Siliga who squeezed his arms free in the presence of two and offloaded.

Mana lost a player to the sin bin for a deliberate knock down and an Aotea penalty made it 17-8 shortly after halftime.

Aotea failed to secure the kick-off and more exploitation of the short side saw Baker rewarded with a second. Wing Hunter Sao also dotted down as Mana threatened a blowout.

However, Aotea rallied with Siliga at the forefront. His left leg nearly fell off as he made a bundle of committed runs, one thrust resulting in a try to close the deficit to 27-13.

Had Aotea been more precise with their handling the margin could have been close, but Mana through the stewardship of first-five Jacob Duncan and more polish generally were worthy winners.

Mana was beaten 11-5 by Tawa in the first ever Beard Trophy match on September 14, 1968. They beat the same opposition 24-12 in August 1969 and have repelled four challenges in 2021 and matches the effort of Aotea in winning three Premier I matches this season.

In Palmerston North under still, cloudy skies, the New Zealand U20s had their opening match of 2021 against a ‘Wellington XV’.

Both teams rans with engorged squads, Wellington playing a completely different XV in each half and the U20s making almost as many changes at halftime.

The match did not carry first-class status, and served as a glorified trial for both camps.

That stated, it was a proper scoring match and the New Zealand U20s won 40-0, outscoring Wellington six tries to nil.

The New Zealand U20s scored five tries in the first half and led 33-0 at halftime. The closest Wellington came to scoring was right at the end of the first half from a forwards drive at the line that was defended.

The second half was closer, as the scoreline suggests, but both teams turned over a lot of ball and the game became disjointed towards the end. The U20s finished their scoring about 10 minutes into the second half with a try to loose forward Fabian Holland from a penalty and lineout drive.

For the record, the two representative teams that met were: