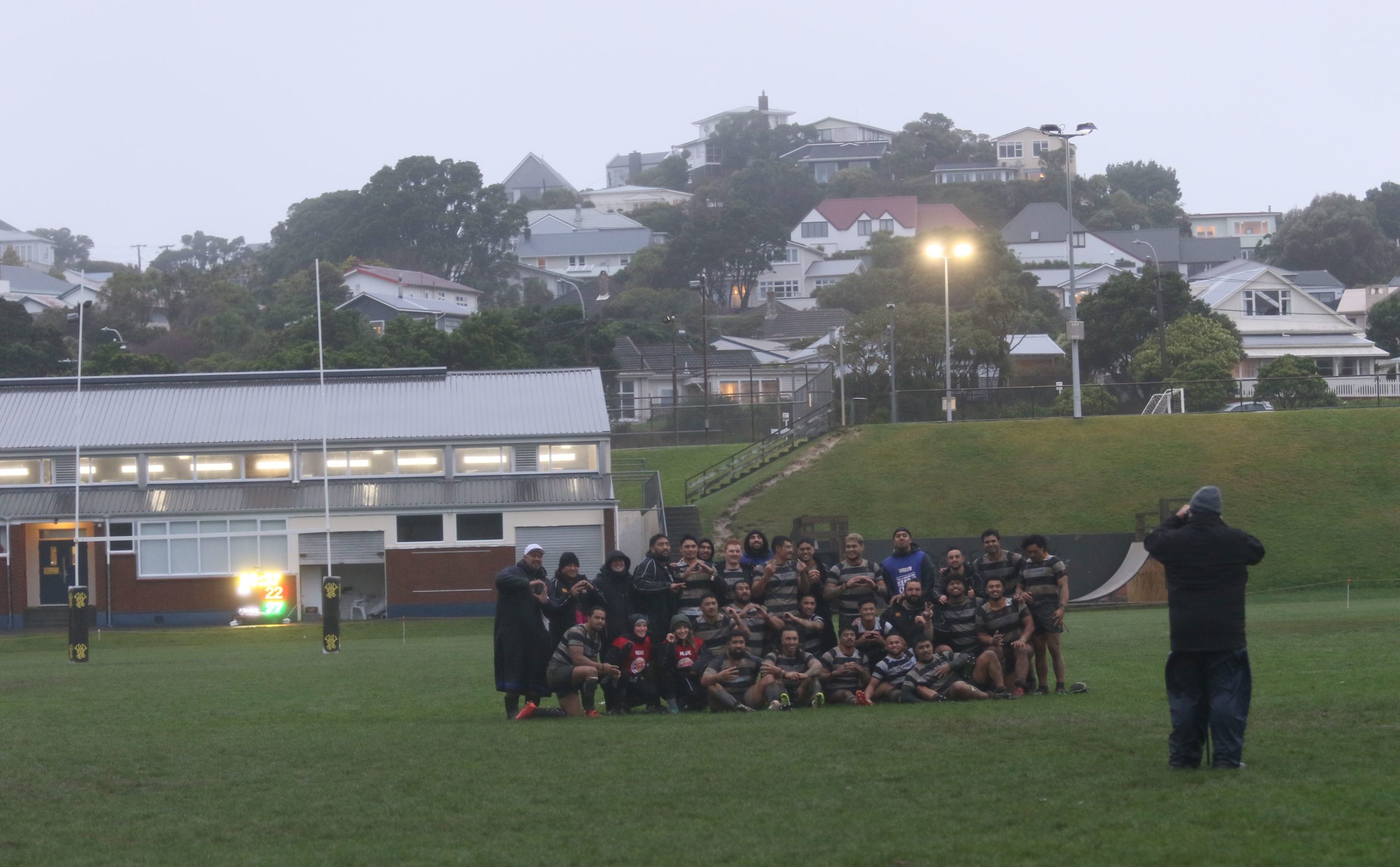 Update #2: A wet and wild weekend is set to continue into the new week, with high winds and a southerly blast on its way. The rugby pushes on.

There are two scheduled midweek First XV school matches on Wednesday, while a representative contest on the same day has been shifted to Palmerston North because of Covid considerations.

The sixth round of the Wellington First XV Premiership opens at Wellington College on Wednesday afternoon between the home school and Rongotai College. This is part of a full school sports exchange, so a busy afternoon up the driveway. Kick-off time is 1.30pm. But if we are still in Level 2 then no spectators, including us, so no coverage.

The game at Porirua Park at 5.30pm between Mana and Aotea Colleges doubles as a Premiership fixture and the final Beard Trophy contest of the year. This has the makings of a terrific game so not to be missed. Aotea are hoping to reclaim the Beard Trophy that they lost to Porirua College at the tail-end of last year and that Mana won off Porirua at the start of this year. Mana are midtable with two wins and Aotea anchored to the bottom winless. Mana lost to HIBS 21-24 on Saturday and Aotea 0-59 to Scots. This will all count for nothing on Wednesday. Update. If we are still at Level 2 on Wednesday then this game will be called off.

The third match is between a Wellington XV and the New Zealand U20s, that was scheduled for the Hutt Rec but is now in Palmerston North. Venue and kick-off time at the time of publishing TBC as well. Update. It is understood this game is still going ahead in Palmerston North regardless of the Level status in Wellington.

There is also a round of schoolgirls rugby scheduled for Wednesday, with Wainuiomata High School hosting St Mary’s College at 4.00pm in Premier 1 and some Premier 2 games as well. Plus there is a boys second XV match between home side St Pat’s Silverstream and visitors Palmerston North Boys’ High School – again time TBC.

Moving into the weekend, and it is the last round before the second round playoffs get underway. OBU and MSP are tied on 51 points in the Swindale Shield, with OBU playing Tawa at Lyndhurst and MSP meeting Wellington at Hataitai Park. There are six teams chasing four spots for the ‘top 4’ for the first week of the Jubilee Cup and any number of big clashes in the other games this coming Saturday. A big weekend of last round clashes in other grades too – we will carry this all in our preview at the end of the week.

A successful weekend for the Ories club. As well as their Women’s and Men’s teams both winning, all seven of the clubs’ netball teams won their matches on Saturday.

Additionally, the Ories Reserve Grade side continues to set a sizzling pace in their grade. They beat Tawa 70-22 to register their fourth straight win in the second round John Davies Cup. In nine matches this season this team has yet to taste defeat and has scored 429 points and conceded 163.

Since the start of the 2021 Swindale Shield Ories and OBU have won 86 matches. OBU beat Ories into second in the standing in 2016 and 2017. Ories have never had a losing record in each season in that tenure. Of the last 11 matches between OBU and Ories six have been decided by less than a converted try.

All Black 550 Colin Loader passed away aged 90 this past week. Colin played four tests on the 53-54 All Blacks tour of the UK & France. An old boy of Hutt Valley High School he featured in 21 games for Wellington between 1951 and 1955 and was a member of the University and Hutt clubs.

The oldest living All Black is 97 year old Roy Roper. The outside back toured South Africa in 1949 and scored tries in the first two tests of the 1950 Lions series won 3-0 by the All Blacks. Roper was a long serving Taranaki administrator and used to collect money for raffle tickets at Rugby Park in New Plymouth with a split tennis ball.

The Canterbury Women’s NPC squad was named last week, featuring former Marist St Pat’s and Wellington Pride Black-fern Marcelle Parkes. She will be in the squad in the loose forwards along with up and coming Jorja Miller who is still at school at Christchurch GHS and whom our friends at College Sport Media are hoping to do a story with soon.

The Wellington Pride now begin preparations for their campaign. One confirmed pre-season game (assuming we are out of Covid) is on Saturday 10 July on the Kapiti Coast against Manawatu, who dashed any hopes of a competitive Taranaki Women’s NPC team on Saturday with a 61-0 win over them. Other unions are well underway too, such as Auckland and Counties-Manukau meeting on Saturday in pre-season.

Note to some mainstream media (not Wellington’s one, they mostly just cover football). The Manu Samoa vs. Māori All Blacks match on Saturday night was not a ‘test’. That is between two nations. Even calling any national teams the All Blacks other than the actual All Blacks is disingenuous, but that is a path that NZR decided to go down themselves a number of years ago now.

Speaking of two All Blacks teams, the sevens teams competed in the Oceania Sevens in Australia over the weekend, results below. Read more HERE

So if Beauden Barrett and Brodie Retallick can come back from Japan and slot into the first All Blacks squad of the year, why can’t TJ Perenara? Finlay Christie – good player – but is he better than Perenara? Perhaps Perenara made himself unavailable?

The 1973 Maori All Blacks v Samoa match was won 11-3 by the Maori in Apia.  Ken Going was knocked out and Billy Bush was denied an “obvious try” However that was only half the drama as coach Waka Nathan recalled.

Black Ferns Sevens captain Sarah Hirini has been honoured as Te Pou Hapai Wahine, the female flagbearer, for the New Zealand Olympic team for the Tokyo Olympics. The 28-year-old leader was presented the kākahu (cloak) from Ranui Ngarimu at an emotional ceremony with her team and family in Tauranga before flying to Australia this week for the Oceania Sevens. Hirini, Olympian #1276, said she grew up in awe of New Zealand’s Olympians and the country’s flagbearers. “This means so much to me and my family.“Being able to carry the flag and represent the women’s sevens team and the wider New Zealand Team at the Opening Ceremony is going to be such a huge honour. I can’t wait to represent my country at these Games,” said Hirini.

From the Hurricanes last week: Experienced loose forward Blake Gibson is heading to the capital after signing with the Hurricanes for the 2022 Super Rugby season.The 26-year-old scored the match-clinching try in the Super Rugby Trans-Tasman final for the Blues in their win over the Highlanders at Eden Park last weekend. Predominantly an openside flanker, the Auckland-born Gibson offers impact and a desire to succeed at the Hurricanes, six years after he made his debut for the Blues, a club he went on to play 54 times for. Part of the World Champion NZ U20 side of 2015, he also brings strong leadership credentials, having co-captained the Blues in 2019 and led Saint Kentigern College to the 1A 1st XV title in 2013.

A great addition to the Canes, and no doubt several Wellington clubs (not to be confused with calling Super Rugby operations ‘clubs’, as above) will be keen to get his services if he is free for a few matches next year. Who is he replacing? Vaea Fifita is leaving, but he is not exactly a like-for-like player. Du’plessis Kirifi has established himself as the Hurricanes’ No. 1 out-and-out openside. What then is Ardie Savea doing? To our knowledge, he has yet to put pen to paper and re-signed? As a reader said late last week, perhaps Ardie is leaving to join the new Moana Pasifika’s Super Rugby team, possibly with his brother Julian. New Zealand Rugby would want players of this calibre and appeal playing for this team to make it work if this indeed goes ahead.

In Manawatu, the Feilding Yellows, coached by former Upper Hutt Rams coach Nathan Williams, beat Varsity 29-14 to complete a perfect 14/14 round-robin season. The top qualifiers, who will have the services of former Johnsonville prop Tietie Tuimauga back from injury, host Te Kawau this coming Saturday in one semi-final and College Old Boys will host Varsity in the 2 v 3 semi.

Sent in by a reader, and to be substantiated: St Pat’s Town school leaver and 2021 Ories wing Herman Seumanufagai has signed with the Sydney Roosters for two years.

Jerome Kaino (38) ended his career with a European Champions Cup win over La Rochelle, and a French Top 14 final victory over the same opponent. The Aucklander will remain in Toulouse as an academy coach. All Black #1050, he played 83 tests and was a nominee for IRB International Player of the Year in 2011 when New Zealand won the World Cup. The player of the year award was won by Frenchman Thierry Dusautoir. His retirement from France even earned praise from former President Emmanuel Macron.

SENZ, the new sports radio network, will launch on July 19. Some big names including Jason Pine, Ian Smith and Brendan McCullum will front programs but what will the station bring in terms of live sports commentators and local sports coverage?

Trish Hina (44) is still going. The former Black Fern and Hutt Valley Legend of sport played No.8 for Melville in the final of the Waikato women’s competition. Her side went down to High School Old Boys. She commuted nearly five hours from Gisborne to Hamilton for the match.

The British & Irish Lions won their first match against Japan 28-10, but of concern will be the fact they failed to score a point in the last half an hour and lost captain Alyn Wyn-Jones with injury. Irish halfback Conor Murray will replace the Welshman in South Africa despite never skippering Munster or his country.

Plenty of questions about how the new Wellington club rugby second round works. See the article below for an explainer: