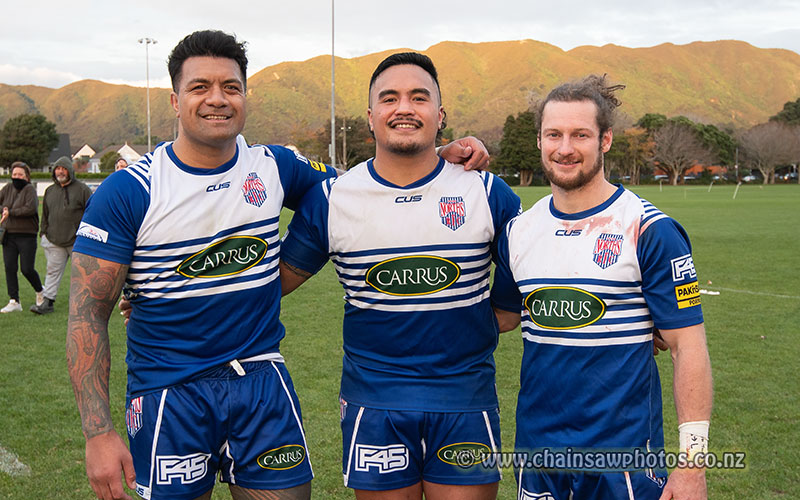 Norths players from left to right after their recent Swindale Shield win over HOBM: Faifili Levave, Lise Soloa and Campbell Woodmass. Norths are building nicely for another tilt at the championship title in July.

Northern United started the first two months of this year’s competition with a four win-four loss record, but it appears they are hitting their stride at the right time.

Three straight wins in recent weeks over HOBM (34-12), the Upper Hutt Rams (20-10) and Tawa (22-14) see Norths well positioned to make a run at the top four for the upcoming re-jigged Jubilee Cup round.

The return of evergreen former Hurricane and Samoan international Faifili Levave in their pack has coincided with their return to consistency.

After a professional career spanning over 15 years that took him all over the world with stints in Japan and France as well as 19 tests for Samoa and 67 matches for the Hurricanes, he is embarking on a new career as a mortgage broker and is enjoying being back playing for Norths and imparting his vast knowledge on to the next crop of players coming through.

Prior to this year, Levave’s last game of Premier club rugby was his side’s 31-37 Jubilee Cup final loss to OBU in 2018. So far in 2021, he has made two starts off the bench and played twice in the starting XV, all over the past month.

This weekend, Norths play the Wellington Axemen at Hataitai. Park. Levave will have two other matches he will be keeping tabs on – even if other circumstances mean he likely won’t be able to attend either.

“I will definitely be closely following the women’s final between Norths and Ories and the match at night between Manu Samoa and the Māori All Blacks,” he said. “I have been keeping my eye on the women’s team each week and wish my sister Sanita’s team well against Ories.”

Saturdays have been busy. “I have been full on with my kids’ sport as well – my son plays rugby for the Norths Lil Terrors U8s and my daughter netball for Rangikura School, and hockey,”

Faifili’s and Sanita’s biggest fan has always been their father. “Dad has been a hearty supporter since we were young. Whilst I was overseas, he would still go along and support the Prems and he’s there for all the Women’s games as well.”

“Covid hit, so I decided to stay in New Zealand. I put the feelers out to the Lions that I was home but I was told there were no guarantees, so that was a catalyst for me pursuing my new career that I am in now as a mortgage advisor.”

An old coach put him in contact with Mike McGinley, the Director of Connect Me Mortgages in Porirua.

“I purposely didn’t play club rugby last year as I wanted to focus on work and settling back into New Zealand after often being away since 2014.

“It is fulfilling being able to play club rugby again now, I am finding I have a good work-life balance.”

How is Norths shaping up?

“I think the team is ticking along nicely. The boys have taken the learnings from the earlier losses and put them into practice in subsequent games and so we are improving each week.

“In professional rugby, winning or losing is the be-all and end-all of the game, but in club rugby the players are not paid and have busy lifestyles outside of rugby, but you will still find them doing their homework and reviews and this shows how much club rugby in New Zealand has grown.

Having professional players come back is always invaluable.

“But the last thing guys like TJ Perenara and myself want to do is come back and complicate things, rather to work with the players and impart our knowledge and experience as simply and effectively as we can.”

In his two starts so far this year, Levave has played blindside flanker and lock. He moved into lock in the second half of the win over the Rams and scored the match-winning try in the far corner, which was converted from the sideline by halfback Campbell Woodmass.

The win over the Rams was on Old Timers’ Day and also on the day that Norths marked the sixth anniversary of the passing of Levave’s former friend and teammate Jerry Collins. He said it was special wearing Jerry’s 6 jersey on the day.

He was known as a flanker/No. 8 in his Lions and Hurricanes playing days, but also played quite a bit at lock in his younger days and more recently in France and in some tests for Samoa.

“I messaged coach Gerrard [Fasavalu] at the start of this year and said I will play wherever you need me to, so he put me in lock. I hope next week he puts me in at centre, I back my speed there!”

Levave, who first played for the Lions aged 19 a year out of St Pat’s Town, was involved in the heady years for the Norths club between 2004 and 2011 when they won four Jubilee Cup titles and were involved in two other losing finals.

He is the last playing link with the 2004 team, a season he remembers fondly.

“I remember playing that final [Norths beat Poneke 20-18] and having to rush home and getting my assignments done for university by the following Monday. I had to shoot straight home and I took some time out to catch up with the boys celebrating later on the Sunday.”

Another Jubilee Cup win later this year would be the icing on the cake of a satisfying career.

Playing in the 2018 Jubilee Cup final.