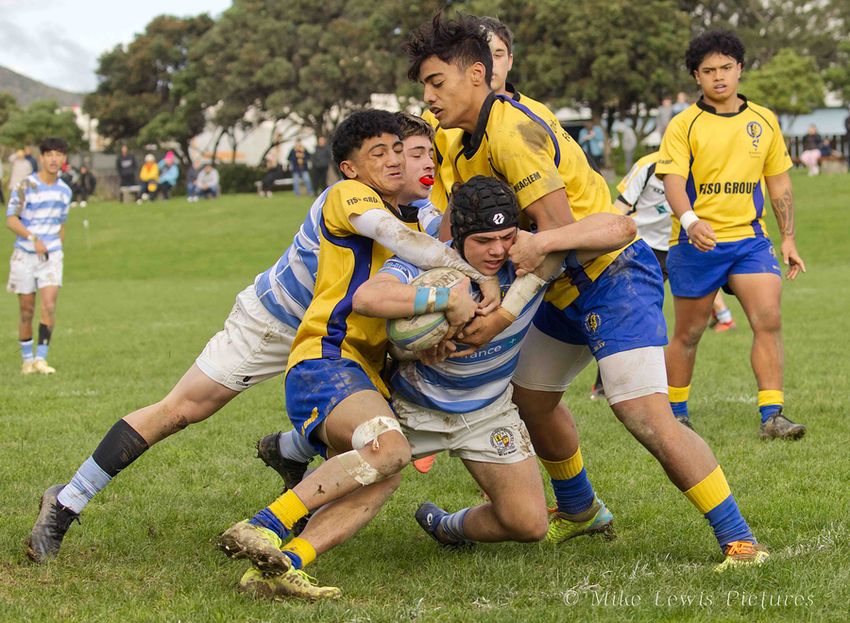 Scots College, Wellington College and St Patrick’s College Wellington are scheduled to play on Saturday, but in the meantime Silverstream are on top following a superior forward effort against a Rongotai side that was sporadically threatening.

Silverstream led 15-0 at halftime with holes frequently found on the left side of the hosts defence, and the scrum and lineout ensuring a consistent supply possession and favourable territory.

From broken play Silverstream was caught off guard by the occasional Rongotai break. With that in mind they employed tighter tactics at the beginning of the second-half. The ball rarely ventured past ten as Silverstream suffocated Rongotai inside the 22. Ironically the fourth try was scored by centre Tony Solomona exploiting an overlap.

Silverstream wing Junior Paulo was powerful and shifted into midfield when hulk Emmanuel Solomona departed at the interval. Tavis Polglase was disruptive at lock and hooker Toby Mallon played a blinder.

Moli Taulogo scored the hosts solitary try close to fulltime with a blistering catch and dash from a Silverstream clearance that missed touch just outside the 22. It was not the first time the elusive Rongotai fullback evaded Silverstream’s grasp.

With only two capped players and a single Year 13 starter in the backline, Rongotai are raw but not without bright prospects.

St Bernard’s College beat Hato Paora College 36-5 in their annual traditional today while St Peter’s College, Auckland had a 39-14 win over St Bede’s College, Christchurch in a clash featuring top four sides in the 1A championship and Crusaders region championship.

A Wellington Co-ed Cup match between Scots College and Taita College was postponed this afternoon, as was a scheduled round of Wellington schoolgirls rugby – owing to ground closures and public health related disruptions announced earlier in the day.