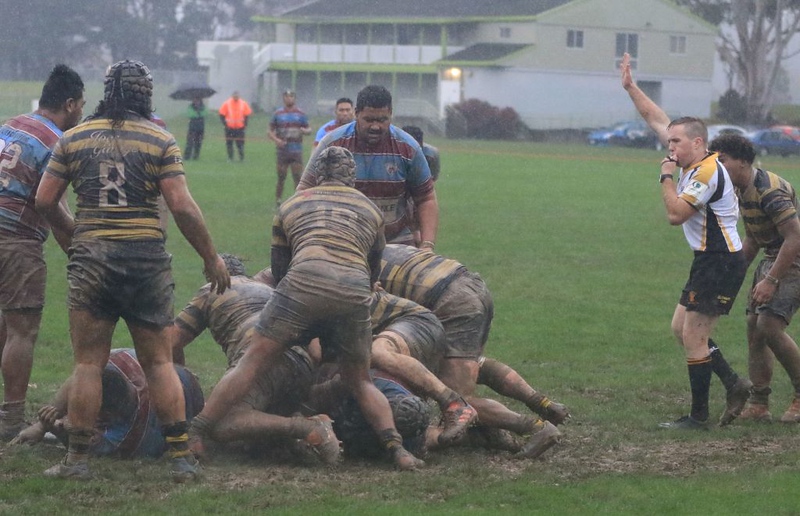 Welcome to winter solstice day – it is all down hill to summer after today.

After 10 weekends of mostly benign weather and often balmy conditions, wintry weather arrived on Saturday. Around about halftime in the seven Premier matches, the skies darkened further and drizzle turned to steady rain. Mud and rain made for plenty of hard-fought matches and tight results.

This week, there are two First XV school rugby matches to follow on Wednesday. The first is Rongotai College hosting St Pat’s Silverstream as part of their annual school traditional and in the first match of round five of the Premiership. Kick-off time is tentatively set down for midday, but this is to be confirmed.

The second of these matches is that between Taita College and Scots College in their Co-ed Cup qualifying knockout match. Kick-off is 3.30pm on Wednesday.

Moving into the weekend and its the 12th and penultimate round of the Premier Swindale Shield. Neither the title itself, the battle to finish inside the top four (to secure a ‘second life’ for the upcoming Jubilee Cup) nor the tussle for eighth place (to qualify for the Jubilee Cup) are decided yet. Look out for our preview at the end of the week and a refresher article explaining how the second round works.

Swindale Shield matches at a glance this weekend are:

There are also two Women’s competition finals to be played on Saturday. The Division 1 Tia Paasi Memorial Trophy final is between top qualifiers Northern United and defending champions Oriental-Rongotai. The Division 2 Izzy Ford Cup decider is between Paremata-Plimmerton and Avalon. Details of kickoff times and venues for these matches to come.

The Maori All Blacks and Samoans meet at Wellington Stadium on Saturday night in the opening match of the international season.

Great respect and friendship shown by Charlie Gubb (MSP) and Tupou Sopoaga (Petone) turning up at Tawa to acknowledge the 100th game for the home side’s No. 8 Tito Ioane on Saturday. Ethan Robinson-Mate celebrated his 100th game for Norths in their 22-14 win over Tawa.

TJ Perenara played alongside his nephew Reon Paul for Norths in their 22-14 win over Tawa.

Sammy Saili played a match for Tawa using borrowed boots in his 40’s. Fellow prop at the time Taniela Koroi was young enough to be his son. Taniela captained Tawa to their first Swindale Shield and Jubilee Cup wins in 2013 and played six tests for Fiji.

The local establishment in Tawa runs a pick the score sweepstake for Tawa games. Dave Gaunt, the voice of Tawa TV, recently picked Tawa to beat the Upper Hutt Rams 36-19. That happened until the last play conversion by James So’oialo. Surely Dave should get a free beer at least.

HOBM’s Brandyn Laursen has moved into the lead of the top point scorers scorers in the Premier Swindale Shield. His five conversions on Saturday against Paremata-Plimmerton have sent him to 126 points for the season so far, ahead of OBU’s Sam Reid with 123 and currently sidelined Norths flyhalf Dale Sabbagh with 113 and Petone’s Carne Green with 101.

No change to the top try-scorers after this past weekend, with Norths No. 8 Luca Rees on top with 11 tries and OBU flanker and MSP utility back Ryan Setefano both on nine.

The Best & Fairest competition is also Luca Rees’ to lose, it seems. An update on Saturday morning (prior to this weekend’s games) had him in front on 13 points, with a four-point lead to nearest eligible challenger, Izzy Foai of OBU.

Manurewa beat Ponsonby 14-10 in the Auckland Women’s Premier Coleman Shield final on Saturday. It is a reversal of the 2020 result and the fourth time since 2011 Manurewa have won the title. The squad includes, Black Ferns Leilani Perese, Hazel Tubic and Arihiana Marino-Tauhinu.

In the Manawatu, Te Kawau prop James Tennant played his 250th club rugby match this weekend. The 36-year-old Tennant, known to everyone as Steak, is an archetypal rural rugby bloke and has been playing senior rugby since 2005. Read more HERE

“Is this the moment? Gibson scores!” Great commentary by Tony Johnson when Blake Gibson crashed over the line for the winning try in the Super Rugby final on Saturday. Perfect use of pictures and emotion to capture the moment.

Bitter correspondence from Christchurch: So what! You beat five bad Australian’s and the fourth best New Zealand team.

Tonga coach Toutai Kefu has included 15 debutants in his squad to contest Rugby World Cup qualifying games with Samoa and a Test with the All Blacks in Auckland.

Twenty-two of the 30-man squad are based in New Zealand, with many club rugby players involved. Their opening game is at Mt Smart Stadium against the All Blacks on July 3. They return to Mt Smart a week later to play the first of two games against Samoa, the second being in Hamilton on July 17.

The sole Wellington player in the squad is Petone’s Mateaki Kafatolu, one of the new players. Read more HERE

The New Zealand Secondary Schools and Barbarians programmes will be based in Wellington after the National Top Four finals in September and October.

How is this for a comeback?

In their English Premiership semi-final this past weekend, Harlequins were 0-28 down against Bristol. But they came back to take the match into extra-time (31-31 after 80 minutes) and went on to win 43-36.

The final next week will be between Harlequins and Exeter, who will be playing in their sixth straight season finale.

Rugby referee Tim Wills is on the road to recovery after collapsing with heart failure near the end of a club game in Dunedin on Saturday.

Mr Wills (21) was officiating a championship colts game between Green Island Green and Kaikorai Cobras when he fell to the ground unconscious with eight minutes still to play.

It is understood Mr Wills has an underlying heart condition, which recurred when on the field on Saturday. Read more HERE

A former Southland Stag rugby player has been sentenced to jail on a range of firearms charges.

Pita William Hapurona Wilson, 45, appeared in the Invercargill District Court for sentencing on Thursday, where Judge Russell Walker sentenced him to 18 months and three weeks’ prison.

Wilson had earlier pleaded guilty to six charges, including (jointly with another) possessing a shotgun in Dunedin on February 15, 2020, as well as possessing a modified Escort shotgun, shotgun ammunition and failing to comply with requirements of a medical officer in Alexandra on April 23, 2020.

He had also admitted possessing a pump action shotgun and shotgun ammunition at Christchurch on January 31, 2021. Read more HERE