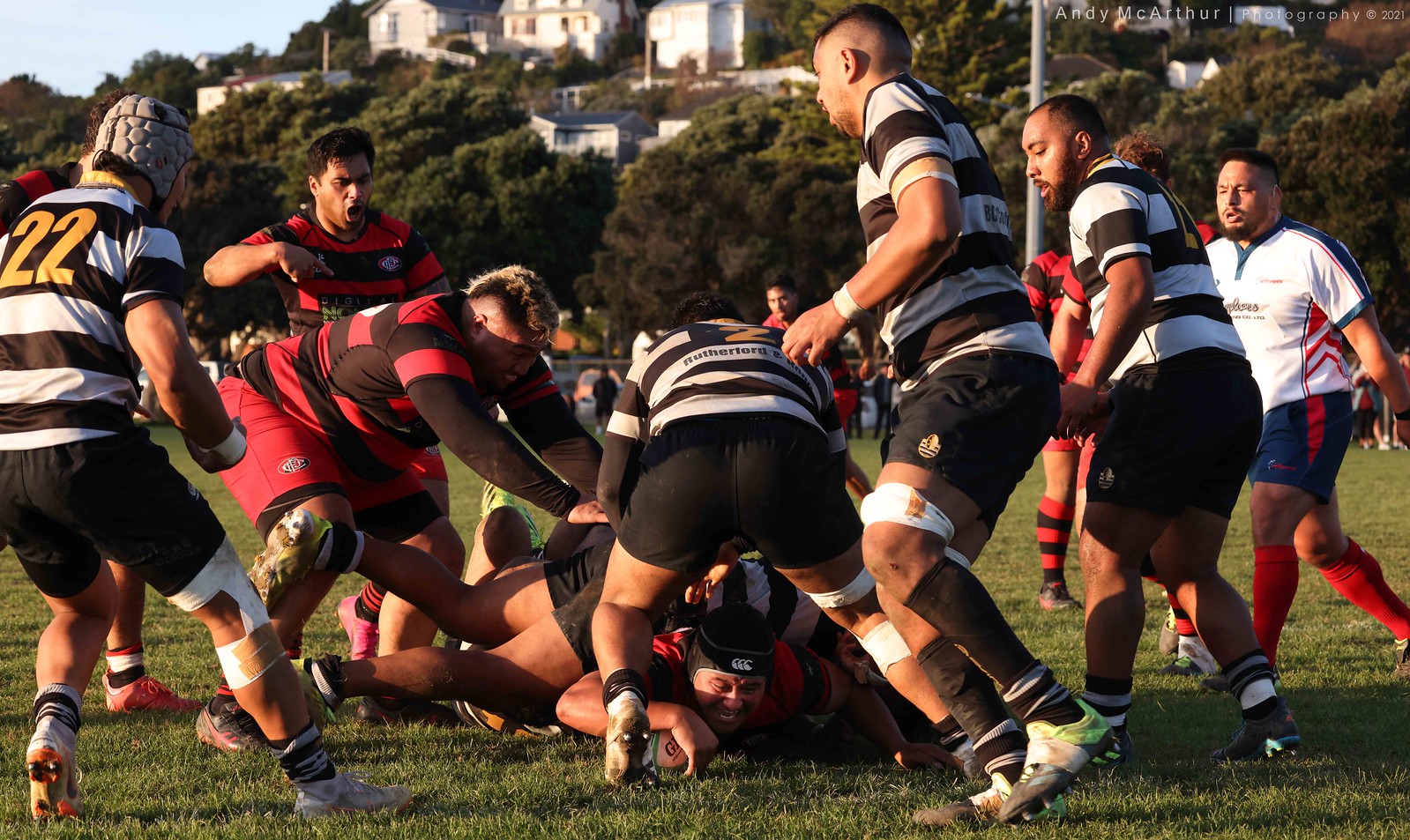 Afternoon edition: The Swindale Shield enters its final stretch, with just a fortnight until the trophy is presented and the field is set for the Jubilee and Hardham Cup playoffs. The Women enter their final round, the Premier 2, Colts, and College have another round, and the Under 85s get their championship rounds underway. And with an inclement weather forecast, it may well be the first wet and real winter’s day of the year.

The Upper Hutt Rams and Stokes Valley celebrate their Old Timers Days, while on the player front there’s a trio of centurions with Tawa’s Tito Ioane, Avalon’s Jordan Aquila, and Norths’ Ethan Robinson-Mate all reaching the 100 mark for their respective sides. We congratulate all three on their milestone.

As we do at this point of the season we take a look at what each of the sides have left with the races for the trophy itself, to be in the top four for the playoffs and benefits that come with that, and to make the top eight to just have a shot at the Jubilee Cup itself

The path is clear for the Goats – bonus point wins in each of their next two matches will see them again claim the Swindale with a week to spare. Anything less than that though, and they could leave the door ajar just enough for someone to bust on through in the final round. More immediately, a BP win away at Maidstone against the Rams tomorrow will secure them one of those top four places with their team unchanged from that which started against the Villagers last week.

The Reds continue to hang tough in their defence of the Swindale, but their chances of retaining it depend on whether OBU drop points while they cannot afford to do that themselves. All they can do is take care of their own business, starting tomorrow in Wainuiomata and retaining their Rona-Morrisey Cup. Aidan Morgan drops out due to NZ U20 commitments, while Tui Tuia, Ken Kapeli, James Proctor, and Isaia Petelo all return.

There’s no way to sugarcoat it, last weeks loss to HOBM put a significant dent in their hopes of getting their hands on the Swindale, now needing events outside of their own control. It also left them in danger of being overhauled by the sides below them with two tough fixtures to come, the first of which is tomorrow against a resurgent Norths with the Sammy Saili Memorial Trophy at stake. Youngsters Akeripa Saveatama and Weston Sao both start, with James So’oialo moving into midfield and Luke Cummings handed the #10 jersey. Tito Ioane starts at No.8 in his milestone match.

The Magpies currently occupy that fourth place, but the next two weeks could be defining for them with Petone tomorrow and OBU next week. Win both of those and they should be safely in the top four, but lose and they may be into sudden death from week one of the playoffs. Their side for tomorrow is a fairly youthful one aside from Whetu Henry, Declan Hay, and Tuga Mativa, and has the addition of Alex Fidow on the bench.

Arguably, no one faces a tougher end to the season than the Villagers who face consecutive trips through the Mt Vic tunnel and an always difficult contest with their eastern neighbours in the run home, so their top-four aspirations depend on they handle those three. They’ll be looking to retain the Jim Brown Memorial Trophy in their match against Ories at the Polo Ground. They’re without both Riley Higgins and Peter Lakai due to the NZ U20’s and Iona Apineru with injury, so their places are taken by Sam Blackburn, Neyla Masima, and Jack Ross respectively.

After their poor day out against Norths a fortnight ago, last weeks’ last-minute heroics against Tawa firmly put them back in the conversation for one of those precious top-four places, and in complete contrast to Petone they face sides all currently in the bottom-six. They host bottom-side Pare-Plim tomorrow, with Ben Power moving back to hooker and James O’Reilly given a seat on the pine, while its a strong backline with Brandyn Laursen moving into first-five.

Where Norths wind up will be determined in part by how they get on tomorrow down at Lyndhurst. Win and they could be a factor for the top-four, but lose and they could be scrambling to just host one of those 5th-8th matches. Tomorrow’s side has the eye-catching inclusion of TJ Perenara who’ll start at first-five, while Bradley Crichton, Waylon Baker, and Johnny Teleaga are also included.

Mathematically, only the Rams can force their way into the top-eight, and realistically Wainuiomata are the only side that could drop out. But for that to happen the Rams need to win all of their remaining matches, starting with their home Old Timers’ Day clash with the leaders tomorrow, and preferably with bonus points. If that doesn’t happen, it could take as little as a point for Wainuiomata to ensure that they’ll be in the eight and have a chance at the Jubilee Cup, while a run of wins could propel them into hosting one of those playoff games.

Wainuiomata brings back many of the players who started on the bench against Johnsonville or were rested completely including veterans Anthony Mamea, Bevan Clark, and Teru Time, and make over a half-dozen changes in all. Upper Hutt also have a host of changes, with Chris Lafaele and Taine Tata back into their pack along with Eli Hunt after his brief run in the backs last Saturday.

The remaining five sides – Poneke, Johnsonville, Wellington, Avalon, and Paremata-Plimmerton – are consigned to the Hardham Cup playoffs, but that won’t prevent any of them from trying to upset the hopes of others. Two of tomorrow’s matches are between these four however so will only impact that end of the table, with Poneke at home against Johnsonville and Wellington heading to the Hutt to face Avalon.

In their team news, Poneke make four changes with Hennie Tui and Jordan Hoerara amongst those coming in. The Hawks are unchanged upfront, with Mark Sutton and Aukuso Tuitama returning to their backline.

Avalon will look to atone for last Saturday’s humbling with a much-changed side with Ale Peni and Anzac Masua back, and a return to Wellington rugby for Ata Langilangi after five seasons away. We are still awaiting the Axemen’s side.

And lastly, Pare-Plim continue to be bedevilled by injury, but their team for their trip to HOBM is largely unchanged from that which narrowly lost to Wellington.

As mentioned, there are three interclub trophies in play tomorrow:

As we touched on in last Saturday’s review, nothing was certain in the Division 1 Tia Paasi Memorial ahead of next week’s final. That changed on Wednesday when Hutt Old Boys Marist defaulted their match against Oriental-Rongotai, handing the Lady Magpies a berth in next Saturday’s decider. But who they’ll face comes down to the match that will be played, with Norths (13) facing Petone (10) at the Petone Rec in what now amounts to a semi-final. Marist St Pats (8) have the final round bye and despite last week’s heroics cannot make the final.

Paremata-Plimmerton (15) are also assured of playing next week, and will warm up for hosting the Division 2 Izzy Ford Cup final by venturing to William Jones to meet Wainuiomata (0), who are the one side that cannot make it to next week. The other spot comes down to Poneke (6) and Old Boys-University (7) who meet at Kilbirnie Park, as a win for either will see them leapfrog Avalon (10) who have the bye and the only way the Shewolves can make the final is if Poneke and OBU play out a low-scoring draw.

Their Premier sides might be meeting, but Division 1 Ed Chaney Cup leaders Tawa and Norths Blue will have to wait for theirs. Instead Tawa head to Kilbirnie to face Poneke, while Norths are at Nairnville to take on third-placed OBU. The Upper Hutt Rams will look to push up the table when they host Ories at Maidstone, and HOBM and MSP will look to get back on track when they meet at the Hutt Rec.

The two leaders in the Division 2 HD Morgan Memorial both face tricky trips away. Petone Blue are at Helston to face Johnsonville, with Wainuiomata providing the opposition for Stokes Valley at Delaney in the main game on Old Timers Day there and the only late kickoff. Norths White get Porirua Park to themselves as they host winless Avalon, with Petone White at home on the Rec against Pare-Plim. Wellington has the bye this week.

Both Colts divisions hit the midpoint of their round-robin. Division 1 John E Kelly Memorial leaders Petone head into the city to face Ories at Polo with the other unbeaten side – OBU Green – heading the other way to take on HOBM at the Hutt Rec. The third match is on Kilbirnie #3 between chasers MSP and Tawa.

Avalon are the only side in the Division 2 Vic Calcinai Memorial to have started 2-from-2 and they’re at home against Poneke. Second-placed Pare-Plim have their feet up after being defaulted to by OBU Black, and the Upper Hutt Rams are at home at Maidstone against valley counterparts Wainuiomata.

The Under 85’s return after a week off for most, and are split into two divisions for the balance of the year. Six teams will contest the championship Division 1 Paul Potiki Memorial with the opening round highlighted by the clash between defending champions the Upper Hutt Rams and JC Bowl winners Eastbourne at Maidstone. The other two matches have Avalon at home at Fraser Park against Poneke, and MSP take on Johnsonville at Kilbirnie Park. Five teams make up the Division 2 Tony O’Brien Shield with returnees Stokes Valley making their season bow at home at Delaney against the OBU Scallywags, and HOBM take on Wellington at the Hutt Rec with Wests having the opening bye.

Just three matches tomorrow in the Premiership after two were played on Wednesday with Wellington College beating Silverstream 31-27 and Porirua getting their first win and keeping Aotea winless by 17-15. Tomorrow Scots will look to move into sole lead when they venture to Trentham to face Hutt International, while in the eastern suburbs Town host Mana and Rongotai do likewise with St Bernard’s.

In Premier 2 there’s a battle of unbeaten sides as the Silverstream 2nds host joint-leaders Bishop Viard, while the other joint-leader – Upper Hutt – head down the valley to face winless Naenae. The remaining game in the province is at Evans Bay where the Town and Wellington College 2nd XV’s meet, while Tawa make the trek to Masterton to take on Wairarapa College and up the coast Kapiti hosts neighbours and rivals Paraparaumu.

The next College games are on Wednesday when Rongotai host Silverstream in their annual clash, and Scots venture to Taita for their Coed Cup encounter.