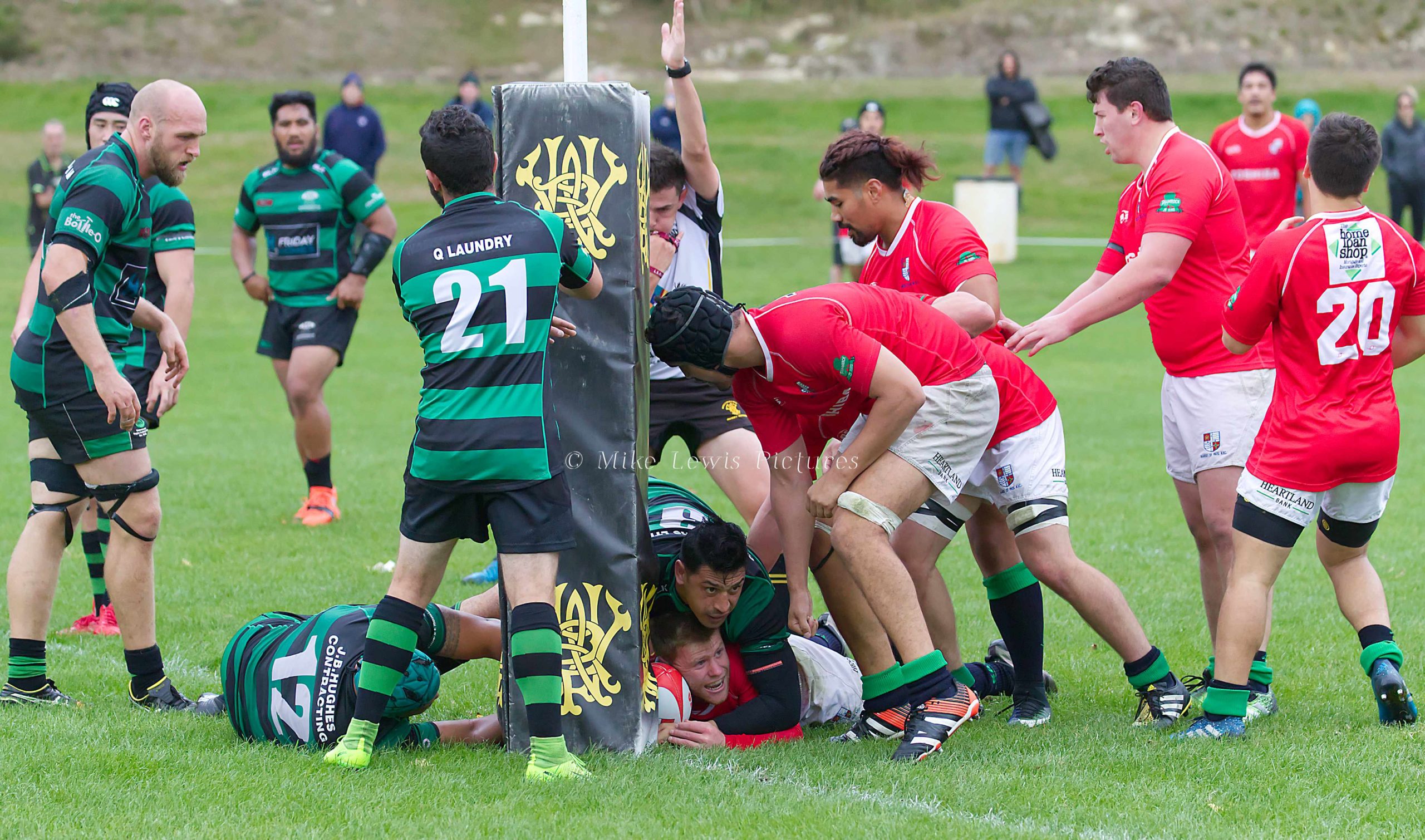 This was a third round 2018 Swindale Shield fixture, with Marist St Pat’s beating Wainuiomata 44-19 at William Jones Park.

In this photo, MSP fullback Lunges over to score in front of the uprights in front of the desperate grasp of Wainuiomata centre Marvin Karawana and with second five Teru Time sprawled on the ground and lock Bevan Clark (left) unable to prevent the try.

Wells has planted the ball hard up against the posts, which is good enough for a try, and referee Vincent Ringrose agrees with a hard blast in the affirmative on his whistle.

Both sides were coming off losses in the first round and then wins the week before. After running out of steam and being pipped by Avalon on opening day, Wainuiomata were able to get one over OBU with young flyhaf Justin Wilson (now with Paremata-Plimmerton) having nailed six-from-six against the Goats.

MSP had seen saw off a fighting Axemen side at Evans Bay the last Saturday after their first-up loss to Tawa.

Many of these same players had also contested their 24-24 draw when they had met previously in the 2017 Jubilee Cup, a fixture that had seen MSP come back from 7-21 down.

Two exciting additions in both sides for this match were then newly minted New Zealand U20 player Billy Proctor at centre for MSP and Peter Umaga-Jensen at fullback.

The first half was a tense and willing arm-wrestle, with MSP having first use of a blustery wind and leading 10-7.

Now playing into the wind in the second half, centre Proctor helped spark MSP with an 80-metre run setting up a try to second five-eighth Ryan Setefano to put the visitors ahead 15-7. Proctor made a second blistering break, leading to a try to right wing Willie Schultz, followed by a try to hooker Joe Walding-Karaitiana and suddenly MSP were ahead 25-7.

Wainuiomata hit back with a second converted try to cut the lead to 25-14, but MSP sealed their win with several minutes remaining with another forwards try, A flurry of scoring by both sides made the final score 44-19 to MSP.

As well as early season competition points, the match was also for the interclub Rona-Morrisey Cup at stake, which acknowledges two men with ties to both clubs. Cliff Rona played for MSP for a decade from 1972 and was part of their first Jubilee Cup wins in 1978 (shared with Wellington) and 1979 before returning to Wainuiomata and playing for them from 1984. John Morrisey is a long-serving member of Wainuiomata for more than four decades, but before that played for MSP’s predecessor Marist Brothers for several years. It was first played for in 2012.

Neither side had vintage years in 2018. MSP won eight matches from 13 and finished sixth in the Swindale Shield, whilst Wainuiomata prevailed three times and finished 10th.

MSP went on to finish sixth in the new seven-team Jubilee Cup and Wainuiomata qualified top for the Hardham Cup but would lose 26-27 to Petone in the final.