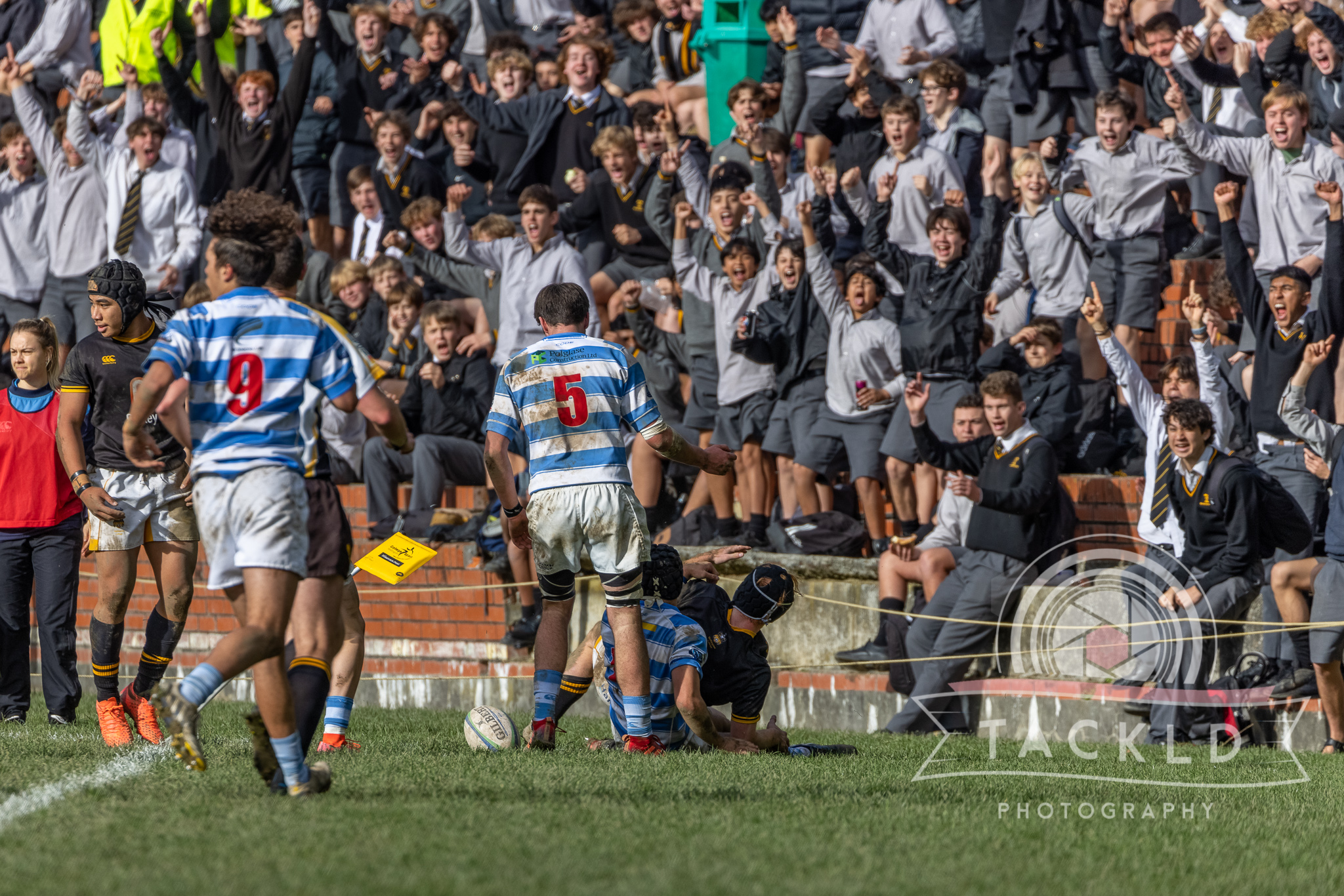 Wellington first-five Stanley Solomon intercepted the ball on the full (after falling over) and decided to set sail from his own 22. He breezed past grasping defenders and scorched beyond halfway, and towards the southern try line. At the Silverstream 22 there was a sudden dummy to fool another tackler before the accelerator was hit again and a headline written.

The conversion by fullback Jacob Waikari-Jones completed a run of 21 unanswered points for the hosts after Silverstream had led 22-10 at halftime.

Wellington wing Josh Williams was the first to dot down when a fumble by Silverstream on their own 22 was pounced upon by blindside Munro Short who released the burly sprinter.

Crosby twisted over from close range to level the scores and then smashed through at halfway, employing subtly near the 22 to set up lively wing Callum Wanden.

The terrace crowd would be silenced again by Crosby when he strode clear following an offload among traffic by fullback Kobe Joe-Vulu at halfway and good linking by Keanu Kotuhi.

What changed in the second-half?

Wellington tackled with greater intensity and started to unsettle Silverstream at the breakdown whose attack subsequently became stilted and predictable, though Crosby was held up twice at 22-21.

Solomon threatened the line more often and holes were becoming frequent. 1Waikari-Jones nailed a 40-metre penalty before hooker Michael Jacobs caused a roar from the terraces with a try that started from a movement heading towards the driveway and rapidly swung back via Solomon and second-five Tofuka Paongo to the other side.

Silverstream’s discipline wavered, and another Waikari-Jones penalty reduced the deficit to one before a second midfield opportunity from 40-metres was taken to make it 24-22.

The Solomon try didn’t signal the end of the drama. Silverstream bravely rallied and scored out wide to close it to 31-27. That was after some defiant Solomon stops!

Sam Morgan should have stopped his mouth. The Silverstream openside was red carded close to fulltime following an outburst at the referee Matthew Thomas. Thomas had already presented a yellow for dissent so Morgan can only be said to have lost the plot. A disappointing blemish for a player of representative standard.

With 2021 semi-finalists Scots College, St Pat’s Town and St Pats Silverstream out the way, Wellington College are well positioned to make the semi-finals for the first time since 2017.

Porirua College advanced to the next round of the Wellington Co-ed Cup and earned their first win of the Premiership with a gritty 17-15 triumph against local rivals Aotea College.

Aotea second-five Heta Tulima had a chance to win the game with a penalty shot out, directly in front 15-meters out, but scuffed the tee and sent the ball left as the hosts held on.

It was a cruel ending for Tulima who’d been one of the visitors’ best players with repeat breaks and solid defense.

Aotea were left to rue two yellow cards and several failures in the draw and pass department.

Porirua asked most of the early questions and a well-oiled lineout earned a penalty try from a maul.

Much of the play was centred around the ten-metre marks as both sides’ aggressive defence matched the honourable ambition. Aotea centre Shaun Wilson eventually busted through to score a try under the sticks.

Porirua wing Cyrus Time is a real flyer and a try he scored on the left wing, swapping from the right, following snappy hands and anticipation from halfback Solomona Uelese was the best attacking moment of the match. The strike happened over 50-metres.

Aotea failed to convert their second try, making the score 14-12, but Tulima atoned with a 25-metre success with 15 minutes remaining.

Uelese is skilful, gusty, and evidently has a boot too. A 40-meter penalty, staring into the dropping sun, was a moment of real quality.

Porirua openside Neru Sheck was a hive of activity in a gripping contest that showed both schools’ can’t be taken lightly for the rest of the season.

Club and college players to need vaccination certificate in 2022