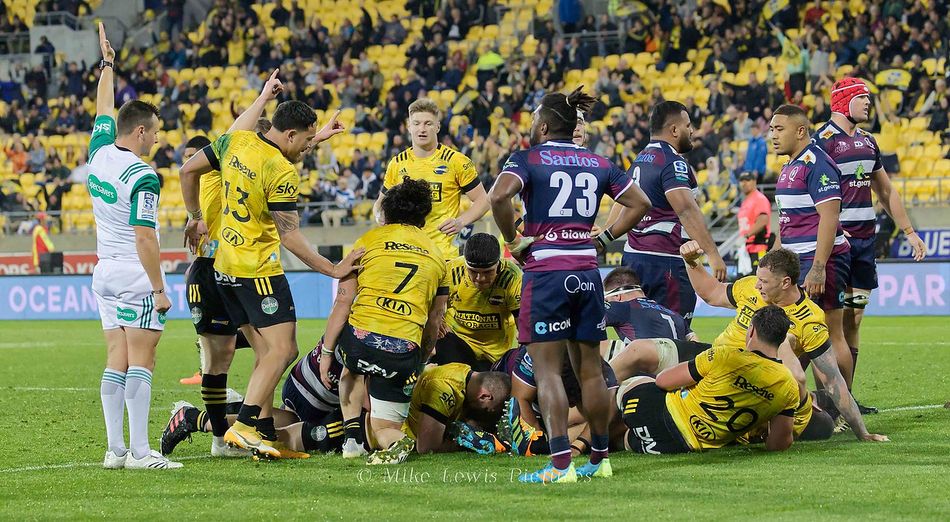 The Hurricanes’ record against the Reds is now played 23, won 17, lost six and drawn none.

The Hurricanes have won more matches against the Reds than they have against any of the other Australian sides.

After losing the first three home matches this year, the Hurricanes won their last four in row. They had not won four on the trot in the same season since winning all nine at home venues in 2018.

The Hurricanes conceded 41 tries this year: the fewest since 39 were scored against them in 2017.The Hurricanes scored 53 tries: just the ninth time they have passed 50 in 26 seasons of Super Rugby.

The Hurricanes conceded 316 points this year: the fewest since opposition sides scored 293 against them in 2009.

The Hurricanes were awarded their first-ever seven-point penalty try.

This was only the Hurricanes third match where they scored first and were not headed at any stage. The other two matches were against the Highlanders at Dunedin (a penalty after six minutes) and against the Rebels at Wellington (a try after 20 minutes). The Hurricanes took the lead against the Reds at the four minute mark with a try and although the scores were level after 29 minutes, they went ahead shortly after and stayed in front for the rest of the match.

Since scoring 40 points in the second half of their match against the Cheetahs at Wellington in May 2017, the Hurricanes have only once scored more than their second-half tally of 33 points against the Reds. That was against the Sunwolves at Napier in February 2020 when they rattled on 34 points after halftime.

A total of 231 different players, from nine teams, appeared at least once in a match against the Hurricanes this year.

Coles has now scored 27 tries in his 128 matches and is actually in 10th place on the Hurricanes try-scorers list. He has scored the most tries by a forward, six ahead of Ardie Savea who is in second place with 21 tries, from 108 appearances. For the record, Andrew Hore is the next highest try scoring forward with 19 tries, from his 106 appearances.

Dane Coles’ second try was the Hurricanes 350th against all Australian sides (209 in New Zealand and 141 in Australia).

Jordie Barrett’s 11 points in the match took his tally in all matches this year to 151. His only penalty brought up exactly 500 points in all Super Rugby matches and his total currently rests on 506. He also kicked 11 points in the match against the British and Irish Lions in 2017 so his total points in all matches for the Hurricanes is 517. He is the third Hurricanes player after brother Beauden (1238) and David Holwell (676) to reach a half-century of points. Jordie’s 517 points are made up of 20 tries, 117 conversions and 61 penalties.

Barrett was the Hurricanes top point scorer for the third time in a season: 144 points in 2017 and 94 points last year. Between he and Beauden they have been the top points scorers for the Hurricanes in the last 10 years.

Jordie Barrett was the only Hurricanes player to start in all 13 matches in 2021 and was on the field for the most minutes: 1017 out of a possible 1042.

Barrett has started the Hurricanes last 19 matches at Fullback. No-one has done this in this position (apart from Andre Taylor who also started 19 in a row in 2012-13), since Christian Cullen played 20 in a row in 2002-03. The record for most consecutive starts at Fullback is held by Cullen: 35 between 1999 and 2002.

Danny Toala made his first appearance in 2021. He had made his debut in 2019 when he made just two appearances. He made one in 2020, the last match against the Highlanders, and now the Hurricanes final match this year.

Ben May made his first appearance in 2021 too. His previous match had also been against the Highlanders last year and that match was to have been his swan-song for the Hurricanes. The match against the Reds was his 98th Super Rugby match for the Hurricanes and with his appearance against the British and Irish Lions in 2017, it is possible May will have finished his career with 99 matches for the franchise, one short of joining the 16 players who reached 100. For the record, Ben May appeared 40 times off the bench during his career and only Chris Eves, (who started just 21 of his 85 Hurricanes appearances), did so more times.

Tyrel Lomax received a yellow card against the Reds, his second of the season. There were a total of 10 cards issued to Hurricanes players, nine of which were awarded to the forwards.

For the first time in the Hurricanes history, a forward was the season’s top try scorer. Asafo Aumua scored six tries, one more than the five scored by Jordie Barrett, Dane Coles, Salesi Rayasi and Julian Savea. Aumua actually scored the first tries of the season: two against the Blues at Wellington in the opening round of Super Rugby Aotearoa.

Aisle be Back: Bledisloe 2 (and other stuff)