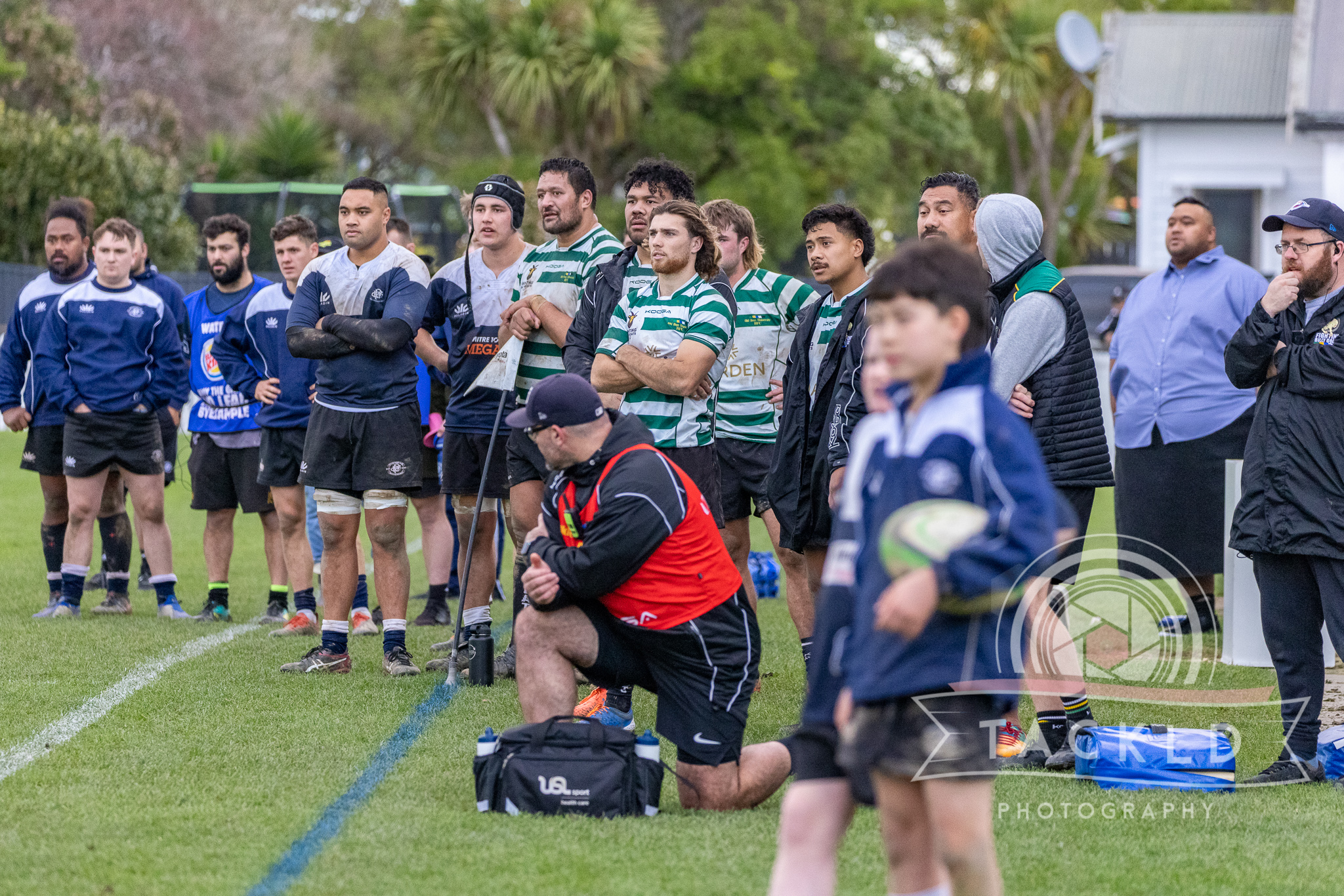 The two benches watching the last minute of the Petone-OBU match on Saturday. Tough competitors watching the game’s conclusion side-by-side. The true spirit of the Swindale Shield.

Monday morning edition: There are 10 rounds down and three to come in the Premier Swindale Shield competition in Wellington club rugby. Our preview later this week will take a look at each team and look at their road home in the first round competition.

At a glance, 11th round Swindale Shield matches are:

Midweek school rugby on Wednesday, with a triple header of First XV matches to follow. The first is the annual traditional and fourth round First XV Premiership fixture at Wellington College between the home school and St Pat’s Silverstream. Kick-off is down for 12.45pm, but check guides on the day to confirm. Porirua College host Aotea College at 3.30pm in a match that doubles as a fourth round Premiership competition and Wellington Co-ed Cup fixture and Mana College put the Beard Trophy on the line against Tawa College at 5.30pm at Jerry Collins Stadium.

There is also a round of girls rugby on Wednesday, while St Mary’s and Sacred Heart College’s meet at Fraser Park on Thursday at 12.00pm in their First XV traditional.

The possibility of a smattering of leading Super Rugby players in club rugby this coming weekend? It remains to be seen who will be available and keen to turn out for their clubs. TJ Perenara was a keen spectator at Norths on Saturday:

It will remain a closely guarded secret, but it would be expected that a Wellington Lions wider squad is imminent. Once named it would also be expected that players will start dropping out of club rugby to prepare for the Super Rugby Development Competition which starts in early August. The Wellington Lions play their first game on Saturday 7 August against Northland, a week after the Jubilee Cup final. A Wellington XV plays the New Zealand U20s on Wednesday 30 June at the Hutt Rec.

Just 15 points scored at Hataitai Park on Saturday afternoon, as Wellington held off Paremata-Plimmerton by 8-7. Thats the second-lowest cumulative total this year following Petone’s opening round 12-0 over Tawa, and the first time both teams in a match were held to single-digits since Petone beat Ories 6-3 back in 2016.

How many players have gone nearly seven years between Premier outings, let alone ones who are already club centurions? HOBM’s Steven Bradshaw – known as “Badger” to the Eagles flock – retired after their victory in the 2014 Jubilee Cup Final where he took home the Jim Brown Medal as player of the match, but in recent weeks has made appearances for the club’s second side. On Saturday he was a late addition to their Premier bench, coming on in the second half as they edged out Tawa at Lyndhurst Park.

Another try for Norths No. 8 Luca Rees in the Swindale Shield on Saturday. Rees is the leading season try-scorer with 11 tries, ahead of OBU’s Dom Ropeti and MSP’s Ryan Setefano, both with 9, and Poneke’s Nick Robertson with 8.

Petone’s Carne Green became the latest points centurion on Saturday. The four leading point scorers after 10 rounds this season are HOBM’s Brandyn Laursen with 116, Norths’ Dale Sabbagh with 113, OBU’s Sam Reid with 111 and Petone’s Green with 101.

Salesi Rayasi will stay at the Hurricanes for at least another two years. The 24-year-old has signed until at least the end of the 2023 season.The 1.94m, 105kg speedster has developed into one of the most promising young backs in New Zealand since he made his debut for the Hurricanes in 2019. The former St Patrick’s College Silverstream student followed a dream of playing basketball professionally before turning his attention back to rugby, firstly linking up with Auckland in the NPC before securing a Super Rugby contract in the capital. A New Zealand Sevens rep, Rayasi spurned the opportunity to chase an Olympic dream at Tokyo to continue to play with the Hurricanes in 2021 and his form throughout the season has been eye-catching. “To stay here at the Hurricanes, it just feels the right thing for me to do,” he said.“I’ve enjoyed myself from the moment I arrived at the club and I want to be part of this squad moving forward. We have a lot of competition for the wing spots at the moment and that’s proving to be really exciting for all of us.”

How bad was Super Rugby Trans-Tasman? The bottom New Zealand side the Hurricanes beat the Australian champions 43-14 with a halfback and first-five pairing with less than 10 games of Super Rugby experience!

Move over Ken, Sean is the new mayor of Wainui. Sean Wainui became the first player in Super Rugby history to score five tries in a match for the Chiefs against the Waratahs.

There are 18 players who have scored four tries in a match. The first was Joe Roff for the Brumbies against the Sharks in 1996, the last was Rieko Ioane for the Blues against the Sunwolves in 2019. The departing Ngani Laumape achieved the feat for the Hurricanes against the Blues in 2018.

The Hutt Valley High School Under 55kg coach is louder and demands more than Sergeant Hardman.

Legendary sports broadcaster Peter Sellers would have turned 100 on June 9. He wore a Rongotai College badge almost everyday of his life and even after relocating to Dunedin in the fifties would ring Wellington to check on Ories results.

There was no senior rugby at the Petone Recreation Ground all afternoon, other than the Premier Swindale Shield game between Petone and OBU. So, four empty fields – apart from the one game. Many people arrived for the curtain-raiser, but there was none. The Council might start to think that there’s no need to  invest so much ratepayer money in unused rugby fields!

Northern United marked six years since the tragic passing in a car crash in France of their favourite son, Jerry Collins, as part of their Old Timers’ Day celebrations on Saturday.

From the same game, Ories right wing Herman Seumanufagai went down injured and the game was moved across to the No.2 field. A long wait for an ambulance though, which didn’t arrive until the resumed match was completed. The good news is he was cleared from an X-ray and CT scan and discharged late Saturday night. A sore mouth though -the inside of his lip required six stitches.

In Wairarapa-Bush rugby news, Greytown beat Eketahuna 63-21 in the first Lane Cup final on Old Timers’ Day. The Lane Cup is a playoff between the top city (Greytown) and country (Eketahuna) Wairarapa Bush rugby clubs. Lane Penn was President of the New Zealand Rugby Football Union in 2001. He was best known for coaching Wairarapa Bush from 1983 to 1986. His record of 26 wins in 60 games doesn’t tell the real story of his influence. In those days Wairarapa was a competitive Division I side who in that stretch beat Hawke’s Bay, Bay of Plenty, Counties, Southland, Otago, Waikato, Northland and Wellington (twice). In 1985 they won 11 of 16 games and finished fourth in Division I of the NPC. They beat Ranfurly Shield holders Canterbury 13-9 that year with flanker Joe Wyeth scoring the winning try. Buck Anderson and Marty Berry became All Blacks from the ’85 side while late wing Greg Karaitiana scored a record 12 tries for the union that season. Four of those came in a 53-5 thumping of Hawke’s Bay and two in a 20-19 victory over Wellington.

Lane Penn was born in Stratford and received his secondary education at New Plymouth Boys’ High School. Usually a winger, he played for Taranaki from 1957-1963 when they enjoyed a tenure with the Ranfurly Shield. He then moved to the Wairarapa union and after joining the Gladstone club made a dozen appearances for them in 1965-66. Lane then turned his hand to coaching and took the Gladstone club’s premier side to a club championship title before taking over from Sir Brian Lochore as coach of the Wairarapa-Bush side in 1983. An All Black selector from 1988 to 1991 he coached a number of national sides including New Zealand development, divisional Marist and the under-19 fifteens. They never suffered defeat. The farmer passed in 2014 at the age of 75.

In the final match of the 1883 Wellington Championship (now the Jubilee Cup) to determine the winner of the “Senior Challenge Cup” Greytown FC (who had earlier played Masterton FC) played Wellington FC at Newtown Park on Wednesday, 3 October, kicking off at 4.25pm.With Greytown ahead, the Wellington FC Umpire (Mr Arthur Wylie Morrah, Barrister & Solicitor) awarded a try, which was disputed by the Greytown Umpire (Mr William Davidson Dumbell, Chief Parliamentary Clerk). The game “resulted in a rather unsatisfactory manner, the Greytown fifteen scoring an undisputed try, and the city representatives a try which their opponents ‘declared had not been fairly obtained. “Shortly thereafter, at 6.00pm, the game was called “no-side”, as a draw. The Greytown Club subsequently submitted a protest against the try scored by Wellington FC in the match, but a Committee of the Union “decided that it was fairly scored”. The result was therefore a draw – the Cup remained in the possession of Wellington FC. However Greytown is engraved on the Jubilee Cup trophy as shared winners of the 1883 Wellington Championship.

The Greytown captain in 1883 was Wairarapa’s first All Black Hart Udy. He played 24 games for Wairarapa between 1886 and 1894 and was a noted scrummager. His brother Daniel was an All Black in their first ever test, a 22-3 win against Australia in Sydney in 1903. Additionally, Alfred, Anthony, Charles, Bryce, George, Gordon, Graham, a further two Harts and Harry’s, Leo, Peter, Ward and William all played first class rugby. Petone rugby club, the most frequent winners of the Jubilee Cup, resides on Udy Street named after the family.

Former Scots College and Wellington U18 centre Sage Shaw-Tait scored a hat-trick of tries for his University side against Suburbs in Auckland club rugby on Saturday. Read more HERE

UK petroleum company Ineos looms as a possible major sponsor for the All Blacks, when their contract with AIG ends next year.

The Herald understands the deal, worth $5-8 million, was struck with Ineos chief executive Sir Jim Ratcliffe during his America’s Cup visit to New Zealand.

Environmentalists have accused Ineos of investing heavily in elite sport to distract from its environmentally unfriendly core business.

NZ Rugby has reportedly carried out due diligence on the proposed deal and is expected to announce the partnership within the next few weeks.

From the latest edition of “For The Love Of The Game”, the official e-zine of the New Zealand Amateur Sport Association Inc:

Ten Members of Parliament have put their support behind a proposed new Member’s Bill, which aims to amend the Sale and Supply of Alcohol Act 2012, by banning alcohol sponsorship and advertising of all streamed and live sports and at all sporting venues, in a similar manner to the current restrictions on tobacco advertising and sponsorship.

The Bill will also prohibit alcohol sponsorship of the name of a sports team and alcohol sponsorship of sports merchandise, uniforms, and equipment. Proposed Members’ bills that earn the support of 61 or more members of Parliament (who are not part of the Executive) are introduced on the next sitting day, without needing to be drawn from a Members’ Bill ballot.

You can review the draft Bill, by clicking here.