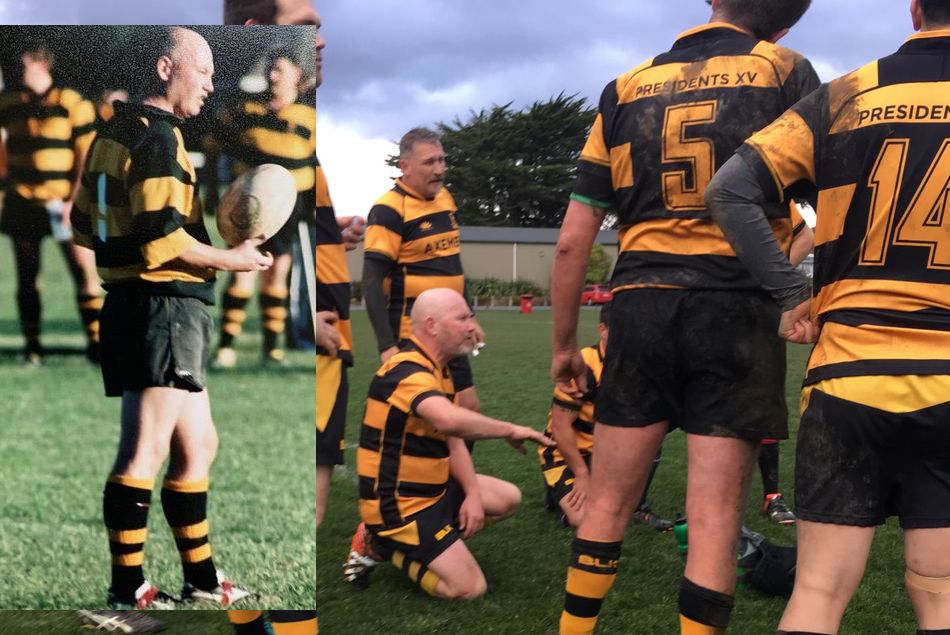 This coming Saturday Jason Judd will play his 500th club rugby match for the Wellington Axemen in club rugby.

Club Rugby caught up with him, as he prepares for his milestone match.

Look out for the WRFU’s story with him next week, following this Saturday’s game for the Wellington Axemen Presidents against the Paramata-Plimmerton Presidents at Hataitai Park at 1.00pm.

Playing positions: Halfback with the occasional game at 10 or 15.

Significant milestones in 2021: 500 appearances for the Axemen and fifty consecutive seasons of playing rugby.

A couple of age grade teams in Taranaki, Taranaki B and a Wellington Juniors team back in the day.

A born and bred Wellingtonian?

Grew up in Shannon until my parents bought a pub in Midhirst (Taranaki) at end of 4th form. Stayed there until started working for the National Bank and was flatting in Stratford before a transfer to Wellington in 1988 where I have been ever since other than a very short stint back in the Naki on another transfer. So pretty much a Wellingtonian now.

50 Seasons in a row is a lot of rugby – do you have an earliest memory either watching or playing rugby?

Earliest memories are bare foot games (yes, with frost at times) in Shannon and absolutely loving it from the start. My primary school was very small, so all of the boys played in the one team for school games – so ages 5-12 effectively. The first International game I remember watching was the water polo test in Auckland when the ABs played Scotland.

Do you have a highlight or standout match or memory from playing school rugby?

I played for Francis Douglas Memorial College first XV for two years and loved the whole experience. A very memorable game against a touring team from England (Campion College) when they scored off the first play of the game and we thought “here we go” as they looked a big and strong team. But we turned it round and eventually won a close game. Really enjoyed all the interschool annual games as well when you really saw school pride on display.

There were more teams and grades back then, so I started in Under 17s, then Under 19s, then Under 21s and then Premiers. The age grades were great fun and made plenty of friendships that still endure today. The Under 17s was a particularly good team on the field (undefeated and championship winners), while the Under 19s was good on the field but outstanding off it (goes on tour stays on tour and all that).

Can you recall your debut game or a standout early game for the Premier team?

Its probably more a case of the first three games! My debut was as a replacement against Inglewood and Dave Loveridge was the other half-back, the second was against Eltham when Bryce Robins was the half-back (normally a wing) and the third against Kaponga when Alan Crowley was the half-back. So two All Blacks and a NZ Sevens/Naki stalwart in first three games. I figured it had to get easier after that but is also a sign of the times – you wouldn’t see that sort of thing these days.

How did you end up at the Axemen then?

After the end of the 1991 season I went overseas for about seven months and when I got back I finally realised I was never going to be an All Black. A work colleague (Isa Makisi) suggested I join the Axemen and the rest is history. Was made to feel really welcome from the outset and loved the environment and people at the club.

Is there a season that stands out above the many others?

The Under 17s and Under 19s in Stratford were memorable for the reasons mentioned above while the first few years when I joined the Axemen and was coached by Tere Raemaki were memorable for the change in attitude. Previously was a bit of a boys club mentality whereas Tere encouraged the team to train and play hard, but afterwards fully encouraged all the players partners, girlfriends and in time kids to be involved. So it actually made for a far more enjoyable time off the field and that has always stuck with me.

Who were some of the characters or memorable teammates you played with?

Bull Allen was a shy captain in my Under 21s and would do what he could to avoid speaking – next thing you know you can’t get him off tv! Of the current crop a special mention goes to Neil Jackson, Lionel Lee, Brian MacLeman and Steve Zeier who have been flogging it out on the Pressies field and prior to that in other Axemen teams and are guys you can rely in to put in a great shift then enjoy a beer with after.

Who are the rival opposition teams who has brought out the best in you and your own team?

Before we moved to Pressies the Senior 3/4 team had some ding-dong battles with Wests and we always enjoyed a win over them. In Pressies time it was Petone in the early days and more latterly we really enjoy playing the Pare-Plim and Johnsonville teams although almost all of them are fun to play and good to catch up with after the game.

I do recall a return game against Ories having played them in the first game of the season on a rock-hard ground and stinking hot day when they had smashed us by about 90 points. They were much younger, bigger and faster than us and had a field day. And they were a bit cocky about it and let’s just say they let us know how good they were. The return game was a wet, miserable, cold, windy day on a heavy field and we just shut the game down and ended up winning about 8-5 or something like that – a massive turnaround. I must admit we did take the chance to point out that experience can count for something!

How have coaches influenced your career?

Pete Bayly and Graeme Parkinson were my Stratford Under 19 coaches and set the bar high (or low depending on your perspective). We played and trained pretty hard, we had some real talent on the field, but off it Pete and Parky led by example, and not always the right ones! Tere Raemaki at the Axemen really took a whole of rugby approach and was instrumental in me rekindling my love of rugby at the time. By having fun, family and togetherness as a mantra we had laughs aplenty and some great times.

Plenty of these over the years but not a lot of variety to be honest – generally the same activity but lasting varying degrees of hours (a couple to many). Have had some awesome team trips over the years with a memorable one to Rotorua with the Stratford Under 19s, Tolaga Bay with the Wellington Senior 3rds and all of the Pressies ones!

Have you ever been sidelined for any period with injury and how’s the body holding up these days?

Touching wood as I speak, but no. In the last game of a season a few years back I did my knee in but was right by the start of the next season. Other than that, just the odd nick here or there. I am too slow to strain any muscles or hamstrings and always wear a mouthguard!

No plans to hang up your boots just yet?

Its started entering my mind – Pressies is over 30s so for those of us in our mid 50’s it is getting pretty tough. And kiwi blokes being kiwi blokes they don’t always take it easy on the older guys and wouldn’t have it any other way. Might start thinking about being part of the blokes who watch the Premiers then have a couple of cold ones and talk about how good we used to be soon…

As well as playing, what’s been your involvement with the mighty Axemen Club?

Other than playing a game for the Premiers, I think I have pretty much done it all at the club. I have always believed that clubs are only as good as the people in them and there is no such thing as a free lunch – so where I can I help out.

I have organised the Senior 4 and then Pressies teams for about 20 years, been on the Committee since 2001, primarily as Treasurer or Secretary, was Chairman for about seven years, am a Vice-President, Distinguished Service Cap holder and Life Member of the Wellington Football Club.  And I have supported many, many, many social events over the years as my waistline and lack of fitness can attest too.

Is there anything about the current state of club rugby that you would like to change?

I would love to see more club players getting the opportunity to play with and against the All Blacks, Super Rugby and NPC players more often. I understand the reasons, but sometimes it can be organised and it gives a lift to the rest of us mortals – I still remember the games I played as an average footy player against real footy players with great fondness.

The other thing is the level of thuggery and unnecessary sh*t that goes on in club footy. I am all for hard but fair and I really miss rucking, but some of the stuff we are seeing on the field and effectively condoned by some clubs due to their lack of visible action is disgraceful and is putting people off playing the game. It has to stop and I think the clubs and senior people around the game need to stand up and stamp it out.

Big match-ups in third round of the Swindale Shield