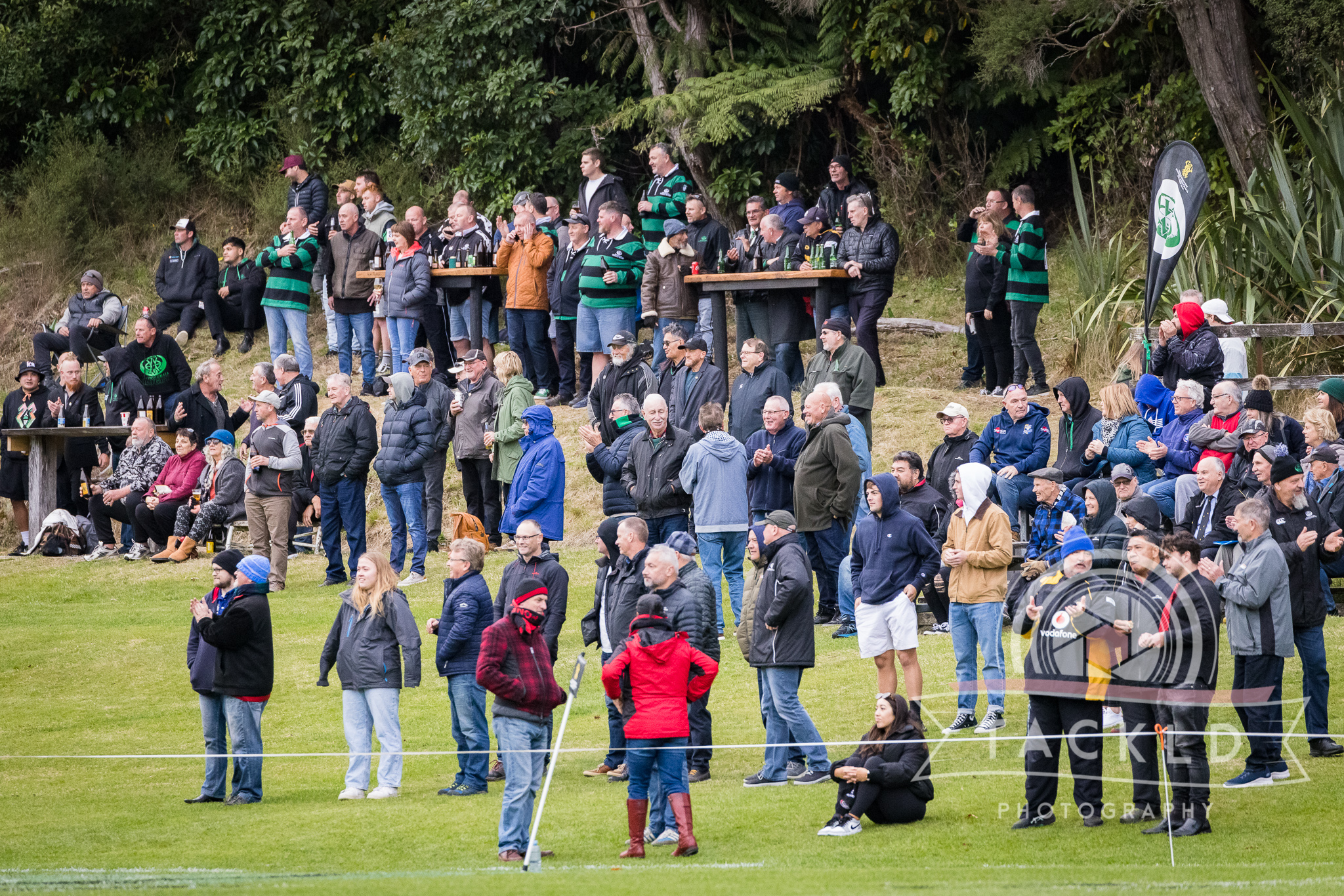 Healthy crowds at some venues on Saturday during and after games, on another mild afternoon around the region. Here a section of the Old Timers’ Day at Wainuiomata watch their team beat Poneke.

AFTERNOON EDITION: There are two weekends before the shortest day and the depths of winter are upon us and four weeks to play in the 2021 Swindale Shield. As always, there are two tussles playing out on in the points table, one to win the first round title and the other to make the ‘top 8’ and qualify for the Jubilee Cup round.

More to come in our preview at the end of the week, but both of these look to be sorting themselves out heading into round 10 of 13. At the top of the standings the OBU Goats maintain a gap to the rest of the field, while the mid-table picture could become clearer after this coming Saturday.

Swindale Shield matches at a glance this coming Saturday:

It is also the first week of the U85kg second round Paul Potiki Shield, so a draw will be announced by the WRFU early this week.

After a week off, the Colts, Reserves and Presidents Grades return this Saturday.

A quiet week on the school rugby front this week, with Scots College hosting Upper Hutt College in their re-scheduled Wellington Co-ed Cup qualifier, at 3.30pm on Wednesday. There is also a round of girls school matches on Wednesday.

As alluded to in our This week in History story last week, King’s/Queen’s Birthday weekend/Monday has a rich history of rugby being played.

There is some rugby being played around the country today, including the match at Masterton at 2.00pm between the Wairarapa-Bush Heartland squad and the Hawke’s Bay Saracens (Development) team.

The Eastbourne Rugby Football Club held their 100th anniversary celebrations on Saturday. On the field, they beat Hutt Old Boys Marist 45-7 to remain unbeaten and win the first round U85kg JC Bowl. A few things from their celebration below:

Kevin Hewson (brother of Alan Hewson) started the Eastbourne U85kg team in 2002. They still go good; but his halftime speeches and fitness methods might launch an inquiry today.  An absolute champion.

Malcom Bishop (born in 1932) played a test match for Brazil against Paraguay in 1962. He’s a regular at Eastbourne rugby club fixtures and has been for years. Evidently his father was the mayor of Eastbourne too.

Clarrie Gibbons (Eastbourne) was president of the New Zealand Rugby Union when they celebrated their 75th Jubilee in 1967. His son Murray was a serious player for the Seagulls.

Ford pass to Holden – even the referee struggled to keep a straight face at HW Shaw Park.

There is halfback chat and then there is David Lim (HOBM Howlers 9). He only plays the first half these days – his mouth would not survive the second.

Chris Martin owns the Four Square in Eastbourne. He has 233 test wickets accompanied by 104 innings with 36 ducks and an average of 2.36. That is an interesting loaf of bread.

Ranji Wilson is the only All Black of West Indian extraction. He has an affiliation with Eastbourne and was a selector for the All Black in 1924/25. That touring party won all 32 games in the UK and earned the mantra of ‘Invincibles.’ But did you know they lost to New South Wales, Wellington, and Auckland on the way to the Northern Hemisphere which at the time commanded earnest entries in Hansard?

The 1921 All Blacks resided in Eastbourne before their test which was drawn 0-0 against the Springboks at Athletic Park.

Paraparaumu beat Rahui 31-18 in their feature Ramsbottom Cup fixture as part of their 100th anniversary celebrations.

It was the 150th anniversary of Dunedin club this weekend. However Alhambra-Union edged Dunedin 29-27 to spoil their  celebrations.

In Auckland, Papatoetoe was celebrating its 75th jubilee, losing 7-27 to Ponsonby with former Poneke No. 8 Presley Tufuga a standout for the winning team.

As previously reported, Ayesha Leti-L’iga scored her 150th club rugby try. She finished the match having scored 152 tries in 60 appearances for her Ories team. Starting on the left wing, she moved into halfback later in the second half.

Anna Darling celebrated her 50th game for MSP women. Formerly with NZR she now works in HR and is a very fine radio commentator.

In the Swindale Shield, Norths No. 8 Luca Rees scored a try against Hutt Old Boys Marist, his 10th of the season. He is the leading try-scorer, two ahead of OBU’s tyro lock/flanker Dominic Ropeti who scored a hat-trick on Saturday and now has eight tries to his name.

A question late last week from a reader asking about the whereabouts of Esi Komaisavai, the Northern United utility back and leading Norths and Wellington sevens player. After playing the opening match of the season at centre for Norths against OBU, Esi transferred to the Bay of Plenty, where he is giving sevens rugby a concerted crack. A blow for sevens at Norths and Wellington but great for him if it works out!

On current standings the Blues will host the Highlanders in the Super Rugby Trans-Tasman final. That’s like the Plate final at the Wellington Sevens.

The Hurricanes host the Reds in Wellington this Friday night in their final match of the 2021 season.

A busy game on Saturday from Highlanders halfback Kayne Hammington in their runaway victory over the Waratahs. Out of St Pat’s Silverstream (2008) and an Upper Hutt/Rams player from 2010-2012 inclusive, Hammington has been a professional player since 2012 when he made his debut for the Wellington Lions. He made nine NPC appearances for the Lions in 2012 and 2013 before moving north to Manawatu where he has played 40 matches. He has played Super Rugby for the Chiefs in 2015 and 2016 and for the Highlanders since 2017 and he played his 50th match for them against the Waratahs.

Below: the June edition of the Rugby News magazine is out now. Turn to page 68 for our Wellington club rugby page.

Grbich Shield on the line for Poneke-Ories match this Saturday