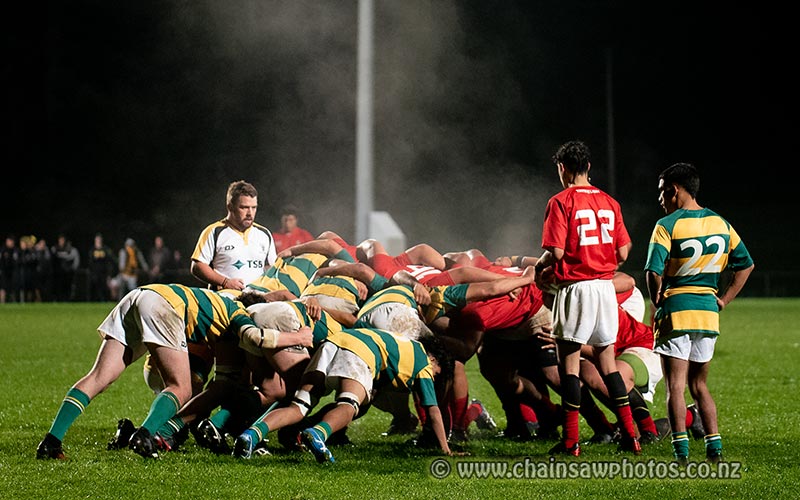 Earlier, Aotea College had beaten Hutt Valley High School 61-17 in their Wellington Co-ed Cup qualifying match. Of note, a second Co-ed Cup fixture between Scots College and Upper Hutt College has been deferred to next week.

The second Beard Trophy match of the year saw the holders Mana College win comfortably, despite conceding this early try to go 0-7 behind:

This spurred Mana into action and they replied with two consecutive well-worked team tries after concerted build-ups to go 14-7 up midway through the first half.

Mana would score three more first half tries – all to centre Sione Baker.

Baker scored the first of his tries after a penalty and attacking lineout, the second from a broken play counter-attack and the third just before halftime following a promising period of play by Bishop Viard attacking their line that deserved a try but was instead turned over and Baker fielded a cross-kick and went 80 metres to make it 31-7 at halftime.

With dew settling in and the surface becoming slippery, there was no further scoring until midway through the second half. Bishop Viard again played well in patches, their tight forwards busy on the pick and go and both their midfielders making some incisive breaks, but they would not be able to score again until fulltime.

Mana eventually increased their lead to 38-7 and 43-7 with two further tries, the first after a long build-up akin to their first two tries and the other a breakout from a scrum feed deep inside their 22 and try in the far corner.

Tawa College and Aotea College have Beard Trophy challenges coming up, the next one being in a fortnight at the same venue.

The Beard Trophy game was preceded by an entertaining 12-a-side girls contest between a combined Bishop Viard/Mana girls side and Wellington Girls’ College, won 69-17 by the locals.

St Patrick’s College, Silverstream held New Plymouth Boys’ High School scoreless in the second-half to claim a 15-3 victory in the 90th annual traditional fixture at the Gully this afternoon.

The visitors margin of victory could have been larger had it not been for sloppy finishing. The hosts hardly fired a shot in the second-half.

With wins over Feilding High School, Auckland Grammar School, Francis Douglas Memorial College, Wanganui Collegiate and St Kentigern College this season, New Plymouth was expected to be a formidable opponent. They were outclassed physically by the hungrier tourists.

New Plymouth started brightly, stretching the Silverstream defence and setting up a penalty which first-five Callum Tito slotted in the fifth minute. It was to be their last scoring act, despite being held-up over the try line three times.

The Silverstream midfield of Tony and Emmanuel Solomona was an ever-present threat. In the 11th minute Tony went sailing through a hole as Silverstream camped inside the New Plymouth 22. Two taps from penalties resulted in no profit, but when a scrum was taken an overlap was created for wing Callum Wanden. Xavier Jacobs converted from near the posts to make it 7-3.

Another break by Tony almost ended in disaster for Silverstream. Reserve outside back Ben McAlister snatched an intercept and forced an urgent retreat from desperate cover. Similar hustle was required to prevent wing Lachlan Guthrie from dashing clear.

Three minutes into the second-half New Plymouth centre Samuel Vakadula made a thrust towards the line and was held up in a tangle of bodies. Ironically Tony Solomona then turned from provider to poacher, latching onto an attempted skip-ball to make a euphoric 95-metre sprint. Jacobs applied the icing and suddenly the score was 12-3.

Silverstream frequently punctured the New Plymouth defence close to rucks. Prop Senio Sanele and blindside Conner Tuifao were abrasive with their carries and Emmanuel Solomona often kept the ball alive with his supreme offloads, if only sometimes he’d show restraint. Openside Sam Morgan was man of the match with a series of piercing busts, tough tackles, and outstanding presence.

The intent to attack by Silverstream was commendable, but they’ll rue some rushed and careless moments which could be punished by better sides.

No.8 Che Potaka battled gamely for New Plymouth who were given a rude wakeup call ahead of their opening Super 8 match against champions Hamilton Boys’ High School in Hamilton next Thursday.

Silverstream plays Porirua College this Saturday in the second round of the Wellington Premiership, while New Plymouth open their Super 8 campaign next weekend against the Chiefs Academy in Hamilton.

Eagles and Magpies soar ahead in Swindale Shield