Skip to content
You are here
Home > Club Rugby > Axemen win on Old Timers’ Day, as Ories and Tawa win close matches in the Swindale Shield 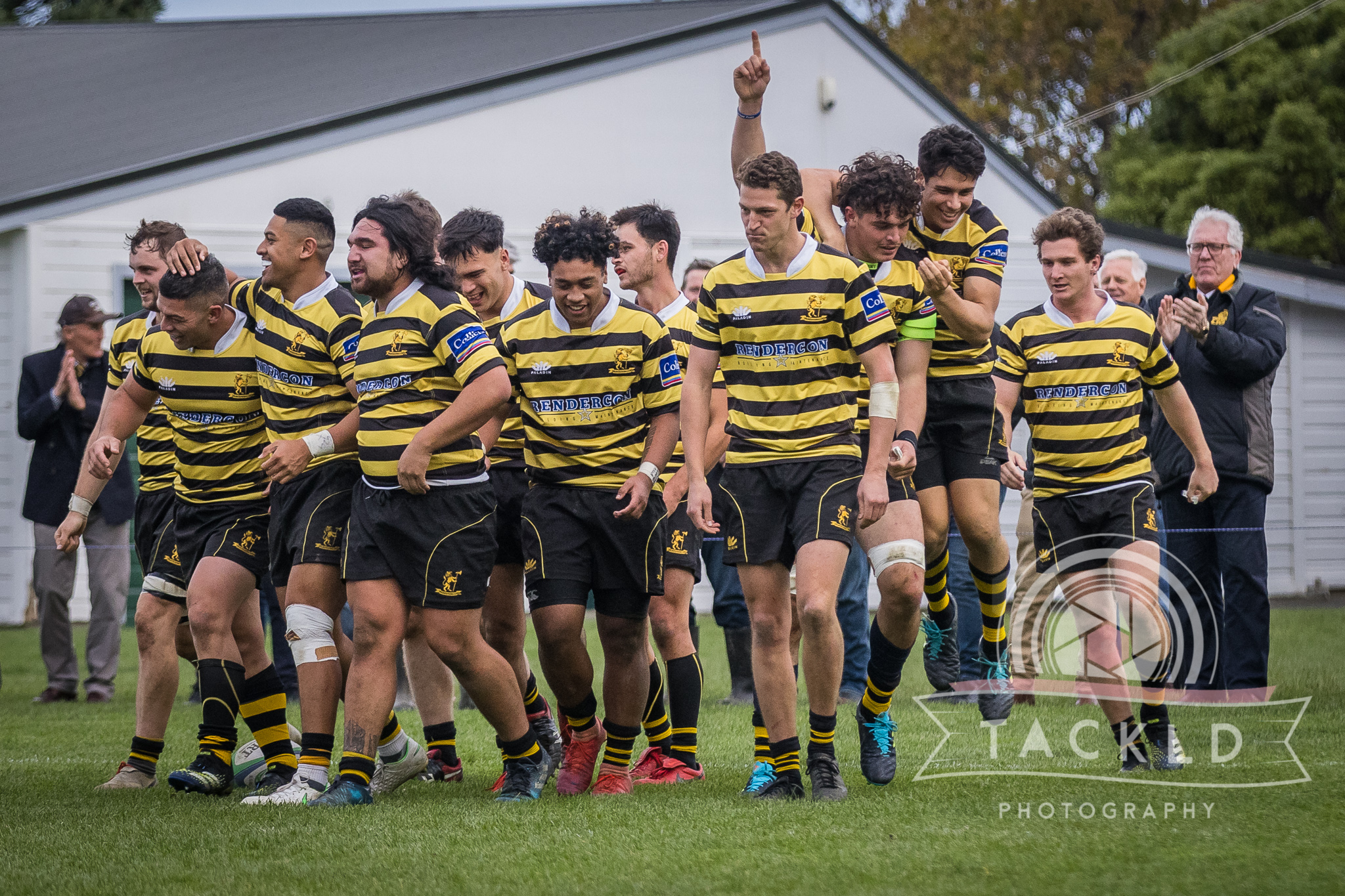 The Wellington Axemen clinched their first win of the season this afternoon on a cloudy but mostly dry eighth round set of Wellington Premier club rugby Swindale Shield matches.

The Axemen beat the Johnsonville Hawks 27-17 on their Old Timers’ Day at Hataitai Park, to leave just Paremata-Plimmerton as the sole winless team in the competition.

The Axemen got ahead with two early tries in the seocnd and third minutes to centre Ahtun Masun and halfback Issac Bracewell respectively, and never looked back. They led 19-5 late in the first half and 19-10 at halftime. Johnsonville closed the gap with the first points of the second half but the Axemen scored what proved to be their match-winner with just over 10 minutes to play with a try to replacement flanker Rory Woods.

At the top of the table, the Old Boys University Goats beat Paremata-Plimmerton 73-14 to maintain their lead and unbeaten run, ahead of a group of five teams who are separated by a bonus point win.

At the head of the chasing bunch, Tawa edged Marist St Pat’s 27-23 to draw level with them in second equal, while Hutt Old Boys Marist beat Poneke 35-22 in their Roy Johns Memorial Shield match to slip into contention. Petone round out the top five after their 27-18 win over the Upper Hutt Rams at Maidstone Park.

In a key mid-table fixture at Porirua Park, an edge at the breakdown and power off the bench propelled them to a 32-26 win over home side Northern United.

Norths took a 6-5 lead after 10 minutes, through two penalties and a try to Ories right wing Ethan Webster-Nonu.

Ories replied with a penalty, but Norths scored their first try through top try scorer Luca Rees who ran 25 metres to score untouched against his old team. First five Dale Sabbagh nailed the conversion and Norths were up 13-5.

Norths almost extended their lead after hooker Leni Apisai scored a spectacular ‘try that wasn’t’ in the corner off a cross-kick. Norths kept the heat on after this and Sabbagh kicked a penalty to see them go up 16-5 after 35 minutes.

Ories cut this to 16-10 at the interval with a solid try to centre Reuben Va’a off an attacking scrum. Norths then extended their lead with a try early in the second half to left wing Ropati So’oailo and at 21-10 up they were looking good.

Ories then hit back with a bevy of scoring to go 32-21 up and have the game won. Left wing Jason Tuitama crossed first, followed by hooker Peniali Poasa, Ethan Webster-Nonu and second-five Steven Va’a.

Norths scored a consolation try at the end to replacement Ethan Robinson-Mate.

Down at Lyndhurst Park, Tawa found their second wind over the last several minutes in beating Marist St Pat’s 27-23.

Replacement prop PJ Scheck came up with the ball from a pile of bodies on MSP’s line to claim the winning try with a few minutes to play. Halfback Kemara Hauiti-Parapara put the icing on the cake by finishing the game with a fulltime penalty.

Earlier in the second half, Hauiti-Parapara’s sinbinning for a lazy high tackle had been a catalyst for MSP surging back into the match and taking a 20-19 lead with about 10 minutes to play.

Trailing 7-19, MSP scored the try of the match when replacement centre Isaia Petelo broke the line from a scrum 80 metres out and found fullback Aidan Morgan in support, who ran the rest of the way to the try line.

MSP now had their tails up and the next free scoring plays were three consecutive long-range penalties to first five James Proctor, setting up the grandstand finish.

Try time under a pile of bodies for Tawa against Marist St Pat’s. PHOTO: Andy McArthur.

Earlier, Tawa had taken a 16-7 lead into half time, out-scoring MSP two tries to one.

MSP suffered an early loss with in-form flanker James Tuia forced to leave the field early after a collision.

Tawa No 8 Tito Ioane scored the first try early on from a messy attacking scrum.

Both teams struggled with their lineouts in a swirling wind, which led to MSP’s first try in reply to No 8 Matt Peni. Proctor’s conversion made it 7-5 to the visitors.

Tawa opened the second half with a So’oialo penalty to extend their lead which ultimately proved enough for victory despite MSP’s comeback.

It was Old Timers’ Day at Fraser Park where home side Avalon missed out 27-13 to Wainuiomata.

Avalon had led early and going into halftime, but Wainuiomata came back with a strong second half to win well.

For Avalon, left wing Anzac Masua scored all their points, through a try and conversion and two penalties.

The second tier started their championship round, and it was a positive start in the Division 1 Ed Chaney Cup for promoted side the Upper Hutt Rams as they beat OBU 38-21 in what proved to be the closest result of the day in the division. Harper Lock Shield winners Tawa kept on rolling beating MSP 33-7, Norths Blue eased by Ories 51-19, and HOBM beat Poneke 38-10.

In the expanded Division 2 HD Morgan Norths White announced their arrival by thumping Pare-Plim 60-17. Other results were closer with Wainuiomata repeating last week’s win over Avalon, albeit with a much-reduced margin, of 27-17, Wellington again went down to Johnsonville with the Hawks winning 22-12, and Petone Blue got the bragging rights with a 34-14 win on their White counterparts.

A big day of results in the Colts grade as both divisions also kicked off their championship round.

At the Ian Galloway cage OBU Green kept their long winning streak intact but had to fight for it as they had a real battle with Tawa in their Division 1 John E Kelly Cup encounter, winning 32-25.

First-round runners-up MSP were surprisingly well-beaten out in Petone with the Village youngsters winning 46-24, while the margin was even greater at the Polo Ground with Ories beating HOBM 32-29 in a thriller with centre Jordan Tuilepa running 50 metres to score under the posts with the last play of the game.

The result of the day however was at Fraser Park in the Division 2 Vic Calcinai Memorial, where Avalon took down first-round winners OBU Black 45-22.

The Upper Hutt Rams also took maximum points, winning a see-saw contest with Pare-Plim 34-26, and Wainuiomata also opened with a win by seeing off Poneke 24-18 at William Jones.

At Ian Galloway Park, it took 85 minutes for first round winners OBU Green to beat Tawa in their division 1 Colts clash.

With scores locked up at 25-25 and into injury time, OBU had one final crack from their chief weapon, their lineout drive, and came up with the winning try. Just a few minutes earlier, OBU had levelled the scores with a penalty, but they then missed a second penalty from virtually in front. Tawa couldn’t deny them a third time at the death.

OBU had started the match the way they finished, with an early try from a lineout drive in the corner. However, Tawa quickly struck back with two tries through their outside backs and a penalty, leading 17-5 after 20 minutes.

Tawa soon extended their lead to 22-5 with a sizzling breakout try involving fullback Bill Tamani and left wing Jared Fermanis who outstripped three defenders on his way to the chalk.

OBU regrouped and scored their second try right on half time from another lineout drive. OBU cut Tawa’s lead to one try early in the second half by scoring yet another try from a lineout drive.

Tawa kicked a penalty but OBU scored their fourth try, again from an attacking lineout, to set up the grandstand finish.

Petone are the leaders of the Division 1 Tia Paasi Memorial after two rounds, notching their second win from as many outings after getting past Marist St Pats 31-21 at the Petone Rec. It was a gritty fightback from the Villagers who trailed 12-21 into the second half, but came home with three tries to get the win. Norths were today’s other winners, easing past HOBM 66-7 across the river at the Hutt Rec. Norths and Ories have a win apiece but have also both had the bye.

In the Division 2 Izzy Ford Cup four teams now have a win each. Poneke were the days big winners, registering their largest margin in many years after taking down Avalon 40-15 at Fraser Park, while Wainuiomata also enjoyed success away from home beating OBU 38-5 Nairnville. Paremata-Plimmerton, winners over OBU last week, had the bye today.

Eastbourne remains in the box seat to claim the Under 85kg JC Bowl next week after today’s penultimate round of matches. The Seagulls kept the OBU Scallywags scoreless up at Ian Galloway Park winning 31-0 and only have to beat lowly HOBM, who lost to Wellington by that same scoreline, next Saturday to be crowned winners.

Avalon is the only side who can head them off, remaining two points behind after beating MSP 36-11. The Upper Hutt Rams won the lowest-scoring match of the day, beating Johnsonville 14-8 at Helston Park, while the Wests Roosters will be celebrating breaking their duck after beating Poneke 35-24.

The big guns sent out some early warnings in the opening round of the College Premiership with Scots, Silverstream, and Rongotai all reaching 50 points in their wins today. Defending champions Scots beat Mana 54-21 but didnt have things completely their own way, Silverstream topped Aotea 50-14, and Rongotai got the points 50-7 over Porirua. The closest game of the day was at Maidstone Park where St Bernard’s beat nominal home team Hutt International 19-12

It was an even start despite the brisk cold wind whipping across Porirua College with the home side matching Rongotai in the first quarter of the match. However when the visitors were eventually able to cross the line they were quickly able to repeat the dose and had their bonus point in hand before the break where they led 26-0. Two more followed before Porirua eventually muscled their way over from close range, but a final pair of tries ended matters.

Rongotai were much the better side and dominated territory and possession, but bombed a number of opportunities and will need to improve their accuracy if they want to retain the top-four standing. Porirua toiled hard, had their moments, and were missing some key players but face a long tough campaign if they can’t tighten up their defence.

In the Premier 2 competition favourites Upper Hutt were comfortable 29-5 winners over the Wellington College 2nds, though the other two 2nd XVs were more successful with Town beating Kapiti 22-15 and Silverstream beat Wairarapa College 19-12. In the other result to hand Paraparaumu won up the coast 33-27 over Naenae while the Tawa vs Bishop Viard one was still forthcoming.

One thought on “Axemen win on Old Timers’ Day, as Ories and Tawa win close matches in the Swindale Shield”